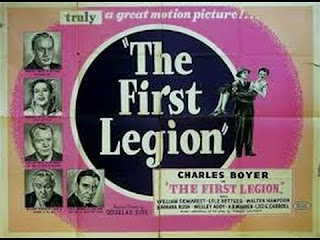 Atheists don't seem to be villains in movies these days, at least in big studio films. Sure, some Christian films, such as the God’s Not Dead series have bad guy atheists who are just shy of Snidley Whiplash (though they generally don't twist their mustaches while tying the heroine to the railroad track).

But in mainstream films, Charles Darwin and Stephen Hawking are heroes. Even fictional characters such as Jodie Foster’s scientist in Contact and Nick Angel in Hot Fuzz are heroes -- and often the most rational, compassionate people in their fictional worlds. Ricky Gervais' 2009 film, The Invention of Lying, is a full-throated advocation of atheism. TV features even more fictional atheists as heroes: Greg House (House), Temperance “Bones” Brennen (Bones), and Mal Reynolds (Firefly). Atheists are often portrayed as the only people who see things clearly and are free of hypocrisy.
This is not the atheist physician in Douglas Sirk’s 1951 film, The First Legion. 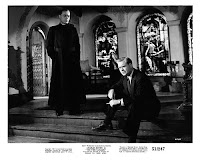 Douglas Sirk had a unique career in Hollywood. In 1937 he fled his German homeland with his Jewish wife to begin a career in Hollywood. His commercial hits of the 1950s (Imitation of Life, All That Heaven Allows, Written on the Wind, Magnificent Obsession) were dismissed by critics of the time as “women’s weepies” and sentimental melodrama. Today his films are highly regarded by critics and filmmakers for technique, use of Technicolor, and Sirk's compassionate treatment of society’s outsiders. His focus on domestic situations and the problems of women is now celebrated rather than dismissed as unworthy content.

The First Legion was made before those well-regarded classics and very different in form and content. First of all, it was filmed in black and white, and rather than being set in a suburban home, it is set in a Jesuit seminary. (A title card at the beginning of the film gives a history lesson, “Four centuries ago St. Ignatius of Loyola, a former soldier founded a company of priests called the Society of Jesus, the Jesuits. This a group of them in the modern world.”) 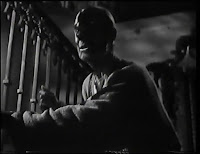 We meet Father John Fuller (Wesley Addy), a priest considering quitting the ministry. He says, “I’d like to go home. I’d like to be part of a real family again. It’s pretty lonely being a man of God all the time.” He prepares to leave the seminary, but the night before his departure, Friar Jose Sierra (H.B. Warner), who has been bedridden for years, rises from his bed and walks to Fuller’s room and tells him he had a vision which told him that Fuller must not leave the order.

Friar Sierra's healing is considered a miracle by most at the seminary. Headlines across the country proclaim the healing. The Rector of the seminary, Father Paul Duquesne (Leo G. Carroll), is excited by the attention the “miracle” is attracting not just to the seminary, but also to the patron saint of the seminary, Joseph. Crowds surround the seminary, and concession stands spring up (including one selling St. Joseph dolls for a dollar.)

But one priest, Father Marc Arnoux (Charles Boyer) does not share the excitement. He is concerned about those who are making a trek to the seminary seeking healing, fearing the travel will harm people’s health and finances. Arnoux, a former lawyer, is dubious about the healing. He investigates, interrogating Sierra’s physician, Dr. Peter Morrell (Lyle Bettger). The doctor asks Father Arnoux if he can make a confession, and confesses that he gave Friar Sierra a drug that brought about the healing. 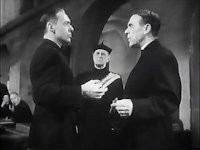 As an atheist, he found it amusing to see the believers celebrating a “miracle” of God when he knew that it was no such thing. Arnoux urges Morrell to publicly disavow the “miracle,” but he refuses and reminds the priest that making the confession public would break his vow of silence. The doctor even burns his records of the Sierra case. He considers it all a fine joke.

But Terry still believes. She finds a way to the seminary chapel and there prays for the soul of Dr. Morrell. She then finds she can rise from her chair and walk. A true miracle.

Most of the priests of the seminary are good men (there is one priest who is a self-righteous ass, but he’s an exception.) There is also a non-Jesuit priest, Monsignor Michael Carey (William Demarest), who enjoys  teasing “God’s Marines” but seems to be a good man. He delights in dogs and says at one point, “Today I saw a man die and a baby born. It was a good day. Everyone should see a baby born.”

So the priests of this film earn our highest Movie Church Rating of Four Steeples and Dr. Morrell should be glad we aren’t rating atheists.

Posted by churchandstates at 9:23 PM