Resurrection (1980)
An ongoing challenge here at Movie Churches is the definition of "clergy," and this week's film is especially problematic. At an outdoor barbeque, a friend is pointing people out to our heroine, Edna May (Ellen Burstyn), who has just returned to her hometown in Kansas (filmed in Texas).

As Edna May's friend looks at an elderly couple at a table at the edge of the crowd, she says, “Ava and Earl Carpenter. They bought the Foley place about 10 years ago. They’re from West Virginia, Holy-Ghosters. She’s nice enough, but he’s kind of a self-styled parson. Fire and brimstone, hell and damnation. All that kind of stuff. Doesn’t seem to affect their son Cal though, he’s a piece of work.”

Now, what are we at Movie Churches to do with a “self-styled parson?” If he calls himself a parson, is he a parson? Denominations and religious institutions generally have a process to certify someone as an official member of the clergy, but if people in a movie call themselves ministers or pastors (or parsons or priests), should we take their word for it? Should it be necessary for such a person to present ordination papers? This would have quite a negative effect on a film’s pacing. 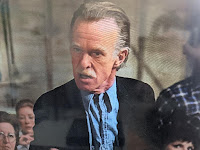 In this film, 1980's Resurrection, we're stuck with Parson Earl Carpenter as the most official clergy member, which is quite odd. Considering the story the film tells, it seems we should have more in the way of clergy and churches.

The film begins with Edna May happily married to Joe (Jeffrey DeMunn), living somewhere near a beach. For his birthday, Edna May, through creative financing, gives her husband a sportscar. They go for a wild ride, without safety belts (take note, kids), and the ride ends in a deadly crash. Joe is killed and Edna May is as well -- for a bit.
Eight minutes after she's declared dead, Edna May comes back to life. While "dead," Edna May found herself heading toward a great light. Along the way she saw people she knew who had died, including her mother. Before she reaches the light, her doctors bring her back, and she is told her legs are paralyzed and she will never walk again.

She decides to return to her hometown in Kansas. Her father drives her back, and along the way, they stop at an odd service station run by Esco Brown (Richard Farnsworth). A sign at the station reads, “God is love, and versa visa.” Esco offers to show Edna a two-headed snake and she eagerly agrees. She pets it, and he says its name is Gemini and it’s a miracle. He informs her that to the Hopi, snakes are a symbol of Mother Earth. Her father wants to hurry along, but before they leave, Esco tells Edna, “If life don’t hand you nothing but lemons, make lemonade, Esco Brown, chapter 1, verse 1.”

Back at her father's home in Kansas, Edna May spends a great deal of time with her Grandma Pearl (Eva Le Gallienne, who was Oscar-nominated for this film, as was Burstyn). While looking through an old photo album for the first time, Edna May recognizes people who died before she was born. Grandma Pearl tells her about another woman she knew, a friend, who also was declared dead and came back. That woman then had the power of healing.

At a family picnic, Edna May’s touch heals the nosebleed of a niece who is a hemophiliac. Edna May decides she must heal herself, and after much effort, she rises from her wheelchair and walks. She begins to heal other people. When “Parson” Earl’s grown son, Cal (Sam Shepard) is shot in the stomach in a barfight, Edna May stops the bleeding with her touch.

Edna May begins to have worship services of a kind, meetings where people bring their sick for Edna May to heal. At such a meeting, “Parson” Earl confronts her, “I’ve been watching these healings of yours, and I haven’t seen you mention Scripture or the Holy Ghost once. What is the source of this power of yours?”

He tells her that her power comes from “Hell itself.” Then he says, “Because if this was the work of the Holy Spirit, you would speak His name. You couldn’t hold back because He’d be speakin’ His own name through you! I tell you this woman, even if you heal 100, 1,000, 10,000, these works are damned. Isaiah! Isaiah speaks it plain! Your hands are defiled with blood!... And Matthew says, ‘False prophets will arise and show great signs and wonders, so as to lead people astray.”

It is strange that this “Parson” keeps talking about how “the Holy Spirit” should be exalted but never mentions “Jesus”, which you would expect a Christian pastor to do. His reference to Isaiah seems completely out of context. But he does have a point with Matthew. There have been many charlatans through the years that Jesus rightly warned against. But Earl is so mean about the whole thing, and Edna May just walks away.

Earl’s son, Cal, goes to see Edna May and asks if he can buy her a drink. At a busy local bar, Cal tells her about how his father forced him to learn Scripture, “Yeah, when I was a 13, I had to learn Matthew, Luke, and John to the tune of a razor strap.” (Why Mark is excluded is not explained.)

Eventually, Cal and Edna May have an affair. But Cal begins to return to the Bible (such as the retelling of Jesus’ birth in Revelation 12) and becomes convinced that God is working through Edna May. He tells her he feels her healing is “something holy.”
She tells him, “I’m not the Virgin Mary, and you should know that as well as anyone.”
He says, “You shouldn’t talk like that.”
She responds, “I will talk any way I damn well please. If anything is holy, it is Love.” 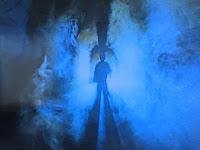 Edna May continues to hold healing meetings, in tents or in open fields. They certainly have a feeling of worship services, but Edna May just talks of generalized “love” and tells Mom Jokes (“Did you hear about the hypochondriac with the tombstone that read, ‘I told you I was sick’?”) She seems to want to avoid talking theology, but says, "I don’t want any of you to think I deny Jesus in any way, because I don’t. But if you ask me where my power comes from, I don’t know, I just know what it does. And I offer it to you in the name of love.”

At one of these meetings, Cal, apparently driven mad by his Scripture reading, shoots Edna May with a rifle, wounding her shoulder but not killing her.

Edna May is understandably shaken by this. She leaves her hometown. We see her, years later, running Esco Brown’s service station. A family in an RV stops by, with a child stricken with cancer. It seems Edna May will heal the child, but the film ends before this takes place.

This all leaves us here at Movie Churches with a dilemma. Were there really any clergy in the film? Earl claimed to be clergy and Edna May acted like clergy, but do either of them count?

Another strange thing in the film is that in this small town in Kansas, with a thriving bar, there seemed to be no church. In 2016, we set out on an adventure to visit a bar and church in each of the fifty states. There were rare small towns that had no bar (usually because of local ordinances and laws), but we never found a town of any size that didn’t have a church.

One gets the feeling that the film didn’t want Edna May to confront any “real” clergy or churches to avoid offending any religious sensibilities in the filmgoing audiences. But here at Movie Churches, we have to make do with what we have, so we'll give Earl for his lack of love and Edna May for her lack of theological depth a Two Steeple rating.
Posted by churchandstates at 7:22 PM