The Return of Nun Month: The Nun (La Religieuse) 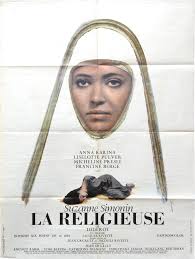 The opening title card (translated from French) reads that the film is “loosely based on a controversial book.” That book was an 18th century novel by Denis Diderot, La Religieuse. But “controversial” in 1780 wasn’t so much so in 1966 when this film came out, let alone today.

What was the controversial issue? Should someone be held to their religious vows when those vows were made under duress or after a person no longer believes in those vows? I don’t think anyone in any position of authority in the Roman Catholic church would try to hold someone to their vows in either situation.

But I guess things were different in Paris in 1757, the setting of Jacques Rivette’s 1966 film, The Nun, based on Denis Diderot’s 1780 novel, La Religieuse. The film opens with a young woman in a wedding dress in a church. There are metal bars that separate the audience from the woman with the clergy; nuns and priests. The woman in the bridal gown is asked if she is there of her own free well and she responds, “Yes,” but she is obviously agitated. When asked if she wants to take the vows of obedience, poverty, and celibacy, she responds, “No.” This causes quite the scandal. 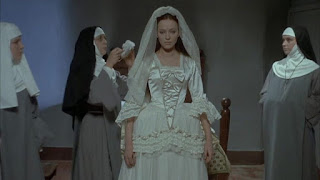 Suzanne (Anna Karina), the seventeen-year-old in the wedding dress, was committed by her parents to the convent. Her parents had found husbands for Suzanne’s sisters but said they couldn’t find a husband for Suzanne and they couldn’t afford a proper dowry for her. (It's a little baffling; she's beautiful, and they  managed to come up with a dowry for the convent.) In time we learn, as Suzanne learns (though the man who thinks he is Suzanne’s father does not learn) that Suzanne is illegitimate. That's one reason Suzanne’s mother doesn’t believe they can find her daughter a husband. Finding a husband was even more difficult after Suzanne refused to take her vows as a nun.

Suzanne retreats to a bedroom at her parents’ house and refuses to come out for months. Her parents call in the priest, who’s heard the family's confessions for twenty years, to talk with Suzanne and convince her to go to the convent. The priest needs some convincing to do the convincing, saying, “God is the One who calls to His vocation, and it is dangerous to add our voices to His.” When he talks to Suzanne he asks her to talk freely because, “I took my orders late in life, perhaps I will understand.” He tells her she may regret rejecting the convent because she doesn’t have many options in her life.

So Suzanne goes to the convent where she finds a friend in the Reverend Mother, Mme de Moni (Micheline Presle). She proves a much more healthy maternal figure than Suzanne's own mother, and she is quite understanding about Suzanne’s reluctance to take vows. Suzanne enchants the convent with her singing and harpsichord talents. And Suzanne is given what I thought was a very large room of her own.

Mme de Moni tells Suzanne that some in convents and monasteries weren’t called but manage to live fulfilling lives. She asks Suzanne if she loves God and Suzanne responds, “With all my soul.” Suzanne asks, “What if I am not made to be a nun?”
“Let grace do its work,” the Reverend Mother responds. Together, the women pray the Lord's Prayer.

When it comes time for her to take vows, Suzanne does, but claims to remember nothing about the ceremony. She seems to settle into life as a nun. But then tragedy strikes. Both Suzanne’s physical and spiritual mothers die within months of each other.

The new Reverend Mother, Sainte-Christine (Francine Berge), is a cruel woman. She makes Suzanne a special object of persecution when Suzanne expresses her desire to leave the convent and forsake her vows. Suzanne is forbidden from singing and playing the harpsichord. The Reverend Mother encourages the other sisters to shun Suzanne and screams at Suzanne, “There is no God for you! Die and be damned!”

Suzanne decides to take legal action in the secular courts to be freed of her vows. Saint-Christine becomes increasingly harsh, taking away Suzanne’s crucifix and Bible. She refuses to allow her to share in the convent meals, and Suzanne must beg for food at the kitchen.

Suzanne loses her case in court, but the court does recognize the abusive treatment Suzanne has received and orders that she must be fed and be allowed to worship. Her lawyer secures her transfer to another convent. 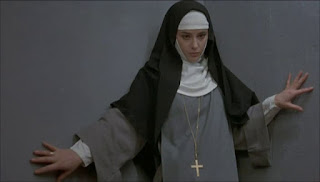 The Mother Superior at the new convent, Mme de Chelles (Liselotte Pulver) seems delighted with Suzanne and encourages her to sing and play the harpsichord. But when Suzanne plays a hymn she is told, “Very pretty, but we have all the saintliness we need at church.”
Mme de Chelles is far from saintly. She forces the woman under her authority to grant her sexual favors and pressures Suzanne to let her into her room at night and let her sleep in her bed. Suzanne seems unclear about what she is being asked to do but refuses none the less.

Suzanne decides she must leave this convent as well, and a priest offers to help her escape. After her escape, the priest makes sexual advances. Suzanne flees him as well. She finds work as a servant but is fired. She turns to life as a beggar but when a woman offers her a job, Suzanne takes the opportunity. When she realizes she is being turned into a prostitute, Suzanne commits suicide by jumping from a high window. 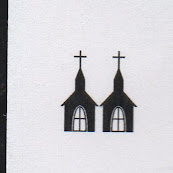 It’s all a very sad story but I don’t see how it’s controversial. I believe all agree, even clergy back in the day, that people shouldn’t be forced into religious vows they don’t believe or be held to those vows if they cease to believe. Because there are clergy that try to help and encourage Suzanne, along with those who torment her, the priests and nuns and Mother Superiors in The Nun average each other out to a rating of Two Church Steeples.
Posted by churchandstates at 7:33 PM