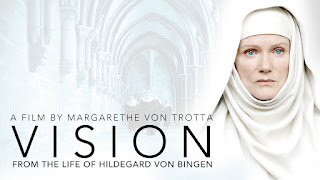 An unfortunate feature of writing this blog is that  -- not infrequently -- I have to admit my ignorance. Yes, literally dozens of people are exposed to my lack of knowledge in many areas, particularly in church history. This another of those times.

While researching films for Nun Month, (my “research” consists of typing “nun” in the search bar at Amazon Prime and seeing what I find) I came across Vision. Its full title includes the name “Hildegard von Bingen,” who I had never heard of before.
I looked her up and thought, “Why haven’t I heard of her before?” She was a Benedictine abbess who lived in Germany from 1098 through 1179, who was also a true polymath. To list some of her accomplishments:

Again, how did I not know about this remarkable woman?

The 2009 film was written and directed by another remarkable woman, Margarethe von Trotta. She began her career as an actress, starring in films made by some of Germany’s greatest filmmakers such as Rainer Werner Fassbinder and Volker Schlondorff (she was also for a time married to Schlondorff and wrote screenplays for some of his films). Von Trotta began directing in 1975, working in feature films, television, and documentaries as well (including the acclaimed Searching for Ingmar Bergman.)

The film portrays the whole of Hildegard’s life, from when she entered a convent as a young girl (played by Stella Holzapfel) through decades of service first as a nun and then as an abbess (played by Barbara Sukowa), founding two convents, until her death the relatively old age (especially for the age) of 81.

The film offers a positive portrayal of convent life, but not through rose-covered glasses. Throughout the film, the Church is portrayed as being influenced and -- at times tainted by the politics of the era. The decisions of the church, and at times even Hildegard’s decisions, are influenced by considerations of power and finance.

But we still see the Church, and particularly an abbess, working to honor God and care for people. For this reason, we give to Hildegard of Bingen, Sibyl of the Rhine, our highest Movie Churches rating of Four Steeples.
Posted by churchandstates at 6:11 AM