Return of of Nun Month: Viridiana 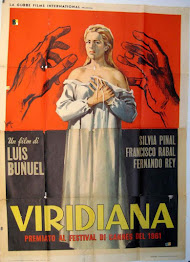 Viridiana (1961)
Prior to this blog, I had a general interest blog (okay, my interests blog) in which I -- more often than not --wrote about movies. For the Return of Nun Month, I thought I ought to dig up a post I wrote for that blog back in December of 2009. It's about one of the great nun (anti-nun?) films of all time. You can decide if my writing has improved or degraded.
To summarize the first paragraph of the original post, I wrote that though I usually wrote about Christmas films at that time of year, I'd decided to do something rather different. Here's the rest of the post:

Instead, I’m going to write about an anti-Christmas film (really an anti-Christian film, but we’ll see that in this context it’s the same thing). Most films that attack the Christian faith take a safer route than the film I’m going to discuss. Many films, Elmer Gantry for example, attack the clergy. Well, most Christians are willing to admit that all have sinned, and there are more than a few scoundrels that have abused their roles as evangelists, pastors, and priests. Some filmmakers (such as the Pythons when they publicized The Life of Brian) claim that they have no problem with faith itself, just with “organized religion. I see very little virtue to the apparent alternative of “chaotic religion.”

Viridiana, filmed in Spain in 1961 by the acclaimed writer/director Luis Bunuel, takes a much bolder stand. It attacks Christianity on the grounds that acts of charity and compassion are futile and without worth.

The film tells the story of a young novice (Silvia Pinal), instructed by her Mother Superior to visit her uncle before she takes her vows. She has up until then had little contact with the uncle who financially supported her.

She obeys and visits her uncle, Don Jaime (Fernando Rey), at his vast but decaying estate and finds him to be a man of rather depraved tastes. He tells Viridiana that she reminds him of his late wife and asks the much younger woman to marry him. When she refuses him, he drugs her coffee and takes advantage of her (to an unclear degree). After this incident, the uncle kills himself, presumably due to his feelings of guilt.

Viridiana learns she has inherited her uncle’s estate, but it is to be shared with her uncle’s illegitimate son, Jorge (Francisco Rabal). Like his father, Jorge is a man who pursues pleasure above all else.

In one of the film’s famed sequences, we see Jorge attempting to perform an act of kindness. He sees a man dragging a dog chained to a wagon. Jorge buys the dog from the man so he will no longer be abused. But we then see another man, another wagon, and another dog even more greatly abused. The implication is that any act of charity can only change a minute fraction of the evil in the world. The film implies that those who are charitable will be betrayed and abused, while no lasting good will come of any of it. Better to "eat, drink, and be merry, for tomorrow we will die."

These charges come as no surprise to anyone who knows Scripture. Jesus acknowledged there would never be an end to need when He said, "The poor you will always have with you" (Mark 14:7). His entire ministry is an example of generosity received with ingratitude, betrayal, and violence, but he came to save His enemies (Romans 5: 7 - 8). He came in the flesh that first Christmas, knowing that He had come to die. His viewpoint was bigger than ours. He knew that after the cross would come the resurrection. We can know that acts of compassion are not futile because every gift we give in His name, He receives (Matthew 25:40).

One bit of business before we close up here. At the time I wrote this, over a decade ago, I was not rating clergy and churches with our Steeple system. I recently rewatched the film and found out the church and clergy really come out rather well. The Mother Superior has genuine compassion not only for Viridiana but also for the girl’s uncle. When she hears about the uncle’s suicide from a local parish priest, she hurries with other nuns to be at Viridaina’s side.

Viridiana never takes her vows, so never officially becomes “clergy,” but she is a woman of compassion trying to care for the needs of the poor. Unfortunately, she works outside of the policies and strictures of the church which might have allowed her to act more prudently. Still, she is our primary near-clergy figure in the film, and her foolishness keeps her from our highest rating, giving her a Three Steeple rating.

Posted by churchandstates at 7:17 PM