I Fought the Law Month: The Godfather III 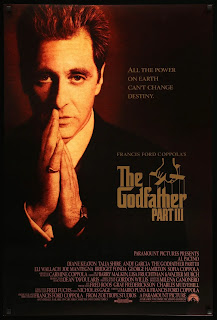 The first two films are among the best films ever made. The third film, though it has some good set pieces, as a whole just isn't very good. To put in in the terms of the Corleone sons, The Godfather III is the Fredo of the series. Still, though, this film has something we appreciate greatly here at Movie Churches: priests and the church in a prominent role. The first two Godfather films have some good church cameos (particularly the christening in the first film intercut with a gangland slaughter). In this film, the Roman Catholic Church carries the central plotline as Michael Corleone (Al Pacino) tries to become respectable by taking over the Vatican Bank.

I’m kind of torn about whether this film really fits the theme of “I Fought the Law,” because the law is not much of a presence in the Godfather trilogy. I think the police make brief appearances in the first two Godfather films, but not at all in the third. The Corleones are not held responsible by civil law, but only gang and church law. 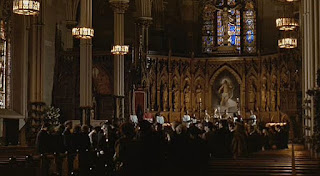 This film moves quite quickly to a church service, a “papal order induction ceremony” at St. Patrick’s Cathedral in New York City. (I had to go to Wikipedia to find out what the service was called. Basically, the service is just an excuse to butter up Michael Corleone, who gave a hundred million dollars through the Corleone Foundation to the poor of Sicily.) The film spends quite a bit of time at this service and especially at the reception that follows. 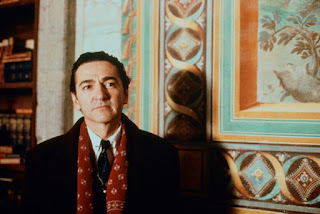 Obviously, there are a number of clergy at the reception. I was most pleased to see a clergyman of some kind named Dominic Abbandando played by Don Novelo. (Novelo also played a character on Saturday Night Live in the 1970’s, Father Guido Sarducci, the Vatican Gossip Reporter on Weekend Update.) Dominic notes that the Holy Father himself blessed Corleone, so who is anyone to question him?

One person who surely questions Michael Corleone is his ex-wife, Kay (Diane Keaton) who remembers the many crimes he committed during his rise in his criminal family. “I’m not here to see you disguised by your church. I thought that was a shameful ceremony,” she tells him.

Michael responds, “Let’s just be sure that this [$100 million] gets to the people who need it. 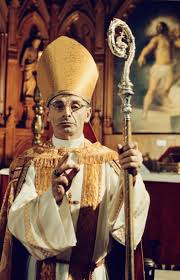 Anthony, a young priest who is also one of Michael's godsons, is also in attendance. The Archbishop says of Anthony Vito Corleone (Franc D’Ambrosio), “There’s always a place in Rome for a fine young priest.” Sure enough, soon Anthony is serving in the Vatican.

But that gift for Sicily isn’t the end of the money the Vatican wants from Michael Corleone. Archbishop Gilday (Donal Donelly) comes to the Don saying, “I need your help. My gift was being able to persuade people to give to the Holy Church, and the Vatican put me in charge of the Vatican Bank. I was never a true banker.” It seems the church bank has a $700 million deficit -- and back in the ’70s (when this film takes place), that was real money.

Michael assures the Archbishop that none of the business he is involved in is illegitimate (never admitting he used to be in very illegitimate businesses). The archbishop says to Michael, “In today’s world, the power to absolve debt is greater than the power of forgiveness,” which doesn’t seem like a very theologically sound statement.

Michael responds, “Don’t underestimate the power of forgiveness.” The Archbishop tells Michael he could be made the richest person in the world if he deposits $600 million in the Vatican Bank. Again Michael has a smooth response, “I have always believed that helping your fellow man is the greatest power.” 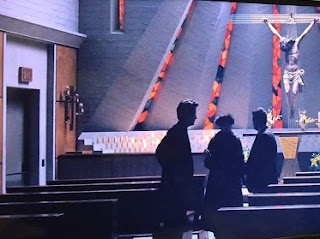 So Michael decides to pursue investing in the Church Bank and to REALLY get rid of his illegal businesses. But when he meets with the gangsters (that work for him) to divest himself of the dirty businesses, an attempted assassination via a machine gun equipped helicopter takes place. Bringing Michael to exclaim the most famous line from the film, “Just when I thought I was out… They pull me back in.”

Things don’t go much better for Michael when he tries to work his way through the church bureaucracy. Catholic business organizations in the United States don’t like the associations the Corleone name brings to the church. He finds more requests for favors and bribes within the church. He trusted the Archbishop but comes to see it as a swindle. He laments that his desire to become “legitimate” is met with more corruption in “decent” society, telling his sister, Connie (Talia Shire), “The higher I go, the crookeder it becomes.”

He seeks counsel from a trusted family advisor in Italy. He is told to see Cardinal Lamberto (Raf Vallone), “a wise and good man, very influential, he will see you.” Turns out, he is rather a good man, at least compared to everyone else in the film. Michael does go to see him.

Michael tells the Cardinal of his frustration with the corruption in modern life, even in the church. The Cardinal agrees, “Men in Europe are surrounded by Christianity, but Christ is not in them.” For a time, the Cardinal discusses church politics with Michael but then asks him if he’d like to give his confession. 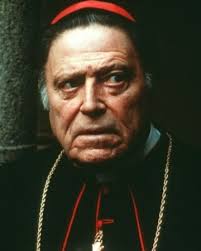 “Sometimes the desire for confession is overwhelming,” the Cardinal answers.

Michael says, “What is the point in confessing if I don’t repent?”

The Cardinal answers, “I hear you are a practical man, what have you got to lose?”

Michael confesses beginning with “I betrayed my wife, I betrayed myself, I killed men and ordered men to be killed.”

“I ordered the death of my brother.”

“What you have done is terrible, and it is right that you suffer,” the Cardinal tells him, “Your life can be redeemed, but I know you don’t believe that.” The priest absolves Micahel and the church bells ring.

But true to his word, in a way, Michael doesn’t repent, continuing to seek power above all else. And most of the clergy continue to do the same in the film. Most pay a heavy price for their corruption. Many clergymen suffer brutal slayings. And Michael pays a higher price.

So what is our Movie Churches rating for the Roman Catholic Church and its clergy in The Godfather III? It would be our lowest rating of One Steeple, but Cardinal Lamberto single-handedly brought the average up, so we're giving this movie Two Steeples.
Posted by churchandstates at 8:49 PM