I Fought the Law Month: The Prisoner

It's the second week of “I Fought the Law Month,” and this week makes it clear that "the Law" is not always the good guy. Sure, last week we had a homicidal preacher -- and there are plenty of movies with homicidal pastors -- and in those films, we here at Movie Churches root for the law. Not in this film. In The Prisoner, we're rooting for the fighter against the law.

This film takes place in an unnamed Eastern European Communist nation in the 1950’s. Directed by 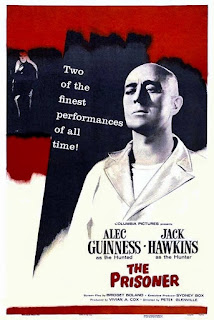 Alec Guinness plays the Cardinal (he has no other name in the film) and we see him leading worship. But during the mass, he is shown a message, “Police here to arrest you.” The Cardinal doesn’t seem surprised by this at all. As the Mass ends, he is arrested. As he leaves the building, he tells one of the priests, “Any confession I am said to make in prison is a lie, or the result of human weakness.” He is then put in a car and taken away.

At the prison, a heckling jailer (Wilfrid Lawson) takes the Cardinal’s belongings: a watch, a bracelet, a cigarette tin, rosary beads, a ring, a jeweled cross. The jailer says, “That’s where the money goes, eh?” before taking the Cardinal's fingerprints. Then the Cardinal is allowed to wash his hands.

He next meets his inquisitor, known just as the Interrogator (Jack Hawkins). He gives the Cardinal some respect, “You are a prince of the Church. You fought in the Resistance.” 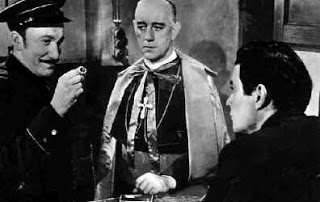 The Cardinal responds, “At least one was on the same side as all of one’s fellow countrymen.” We learn over the course of the film that the Cardinal was a great hero for fighting against the Nazis in World War II. He became beloved by the nation when they learned of his heroic deeds.

The Cardinal asks the Interrogator if there is “any particular plot” he is accused of being involved in, any plot “you hope to uncover?”

The Interrogator is honest in saying his problem with the Cardinal comes from the jealousy of the State, “You represent a religion that provides an organization outside the state. In your pulpit, you are more dangerous than a politician.” 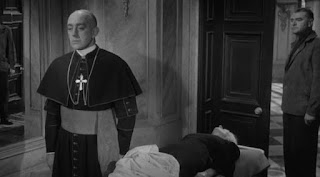 This perplexes the Cardinal, “No drugs, no torture, what do you hope for?”

“A conversion," the Interrogator replies.
The Interrogator tells the Cardinal, “You are dangerous because you mislead the poor, the uneducated and the silly. But only because you are wrongheaded, and you can be cured… Stop thinking of me at the Inquisitor… Think of me as your doctor.”

The Cardinal responds, “God give me cunning against your skill. God keep my watch.”

The Interrogator asks, “If the church isn’t deliberately obstructing the state, are you willing to say it supports it?”

God seems to answer that prayer, Three months go on without any progress in breaking the priest. He wonders if the task is hopeless because -- during the war -- the Gestapo tried to break him and were unable to do so. Then the Interrogator realizes that the Cardinal is genuinely a good man, so he must use that goodness against him.

He tells the Cardinal his pride is what is keeping him from confessing. He asks the Cardinal if he is proud. He does so realizing that a proud man might claim to be humble, but that a truly humble man will confess to pride. With this, and the discovery that the Cardinal had a difficult relationship with his mother, the Interrogator knows how to break him.

The Cardinal is broken, and he confesses in court to terrible things (which are not true). The Cardinal says he stole money from the church, that he told others secrets he heard in confession and that during the war he betrayed the Resistance to the Nazis. The people turn against the Cardinal. 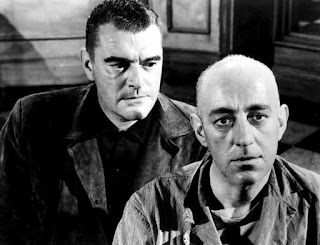 The Cardinal believes he will then be executed. But the government commutes the death sentence. The Interrogator admits to the Cardinal it is because they don’t want him to be a martyr. But if kept in prison, he will be an enigma to the world. So the Cardinal is set free, which seems to be the worst outcome of all.

But the Interrogator resigns from his position because he realizes he really didn’t win. The Cardinal came in as a good man. He leaves broken, but still good.

This film reminded me of another film reviewed here at Movie Churches, Martin Scorsese’s Silence, based on historical events in 17th century Japan. Many Christians were tortured to the point where they denied their faith. But that doesn’t mean God is not faithful. As Paul wrote in II Timothy 2:13, “If we are faithless, He remains faithful, for He cannot disown Himself.”

But judging things is what we do here, and we will judge this priest, this Cardinal. Though he breaks, it is long after many of us would have broken. For those three steadfast months of opposition to the state, we give the Cardinal our highest rating of 4 Steeples.

Posted by churchandstates at 10:10 AM