I Fought the Law Month: Inside the Law 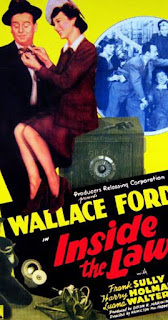 
What? You’ve never heard of this film before? Really?

Okay, I hadn’t either, until I Googled for this month’s theme using “movie,” “law,” and “church” -- and there it was, Inside the Law. I had never heard of it either, so I looked it up on IMDb and found two interesting trivia items about the film.

Item 1: Though the film was made in 1942, it had its television debut Monday, January 14th, 1946 on a pioneer New York City station WNBT (Channel 1). Before I saw this, I had no idea movies had been shown on television in the 1940s. I also had no idea there used to be “Channel 1” on TVs. I’d only seen dials that start with 2 (with the “1” slot used for UHF stations.)

Item 2: This sentence from the plot summary caught my eye: “To complete the pose, they attend Sunday church services and decide to go straight.” Obviously, here at Movie Churches, we couldn’t resist a film with a plot point like that.

Inside the Law is a low (no) budget crime comedy from PRC (Producers Releasing Corporation, a “Poverty Row” studio that lasted from 1939 to 1946.) It was directed by Hamilton McFadden, who directed 29 films that are largely forgotten (except perhaps the three Charlie Chan films he directed which deservedly turn up in term papers on racism in 1930s Hollywood).

This film, though, stars Wallace Ford (an actor who had bit roles in much more famous films) as Billy, leader of a group of confidence artists who rip off rich folks in one city and move to another. In the opening scene, the crew attending an auction, starting a phony fight and picking the pockets of all the attendees. (At this “rare imports” auction, the attendees strangely seem to get to pick the order of items auctioned.) The gang is an interesting assortment. Along with Billy, there is Dora (Luana Walters, the requisite tough dame with a gold heart; Mom and Pop Cobb, an elderly couple with two sons in the gang; and then there’s Jim, the roughest of the crooks. 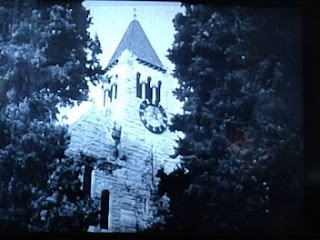 The thieves hit the road, heading west from New York to California (though the montage of the trip seems to be pretty much filmed just in Nevada and the Sierra Nevadas). They eventually come to a “Los Angeles City Limits” sign that seems to be in the middle of nowhere (the surest indication that this was filmed a long time ago).

As they stand around by the car before finishing their trip, a cop pulls a man over for drunk driving (the presence of a police officer makes the gang quite nervous). While pretending to help the drunk, Billy steals his wallet. (The wallet is really huge. Did people used to have wallets the size of trade paperback novels?) Billy finds something of great interest, along with some cash. A letter of introduction to the Walnut Valley Bank. Billy decides Walnut Valley is their destination.

When the gang enters the bank, the president of the bank, Judge Mortimer Gibbs, is being held at gunpoint by a farmer who can’t pay his mortgage. Jim knocks the would-be robber out, allowing a felicitous introduction to the institution.

Billy introduces himself as Richard Black, the new Chief Teller, and the grateful judge welcomes him. Billy says he will need a staff he can trust, so he fires all the current tellers and hires his crew in their places, saying “I don’t trust strangers”. (Billy does make his gang cough up money to pay the old staff severance. They’re paid “a yard a piece” or $100 a person.)

But the gang is in for a surprise when they look in the bank’s vault. There’s nothing there, which would be real trouble if a bank examiner came along. The bank robbers are saddened that there is no money to rob. “You’ve hooked us all into a surefire gilt-edged flop,” Pop complains. 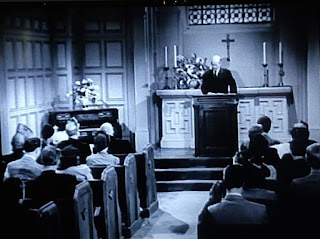 The judge acknowledges the problem to Billy, who tells him he’s got twelve schemes to get people to deposit money in the bank. His first proves a winner.

He challenges people to bring their safes or lockboxes to the bank. If Billy can crack them, people agree to put their money in the bank. If Billy can’t break into one of the safes, the owner gets a cash prize. Fortunately, Billy is very good at cracking safes, and the bank soon has a lot more customers.

Soon, so much money flows into the bank that the vault holds over $70,000. The gang thinks about fleeing with that cash, but then considers, “If we got that much cash in a week, how much can we get in two?” They agree to stick around for a bit. When that same farmer who tries to rob the bank comes in again, Billy agrees to loan him $5000, to the chagrin of his partners.

Sunday morning the gang is together, playing cards. But Billy comes in the room as they hear church bells ring. “Don’t you know those bells are ringing for you?” Billy asks. He asks Dora to confirm, “You’re a small-town kid, don’t you know if we’re not in church it will be the biggest run on a bank you’ve ever seen?”

Dora confirms the people of the town will expect them to be in church on Sunday morning.

The gang all dresses in their Sunday best. Dora says to Billy, “You’re marvelous, you’re the finest, grandest crook I’ve ever met.” She notices that “Pa actually shaved!”

But Billy still thinks there’s a problem with how everyone looks, “You look like a bunch of mugs going to have your teeth pulled. Smile!”

Dora tells them, “Don’t worry about how you look, when you get in the church, relax and let the spirit of the service come in.”

Jim complains, “If I have to go to church and like it too, count me out. Besides, I haven’t shaved. I’m not fit to go in.”

“Aw, come in anyway,” the rest of the gang encourages him. 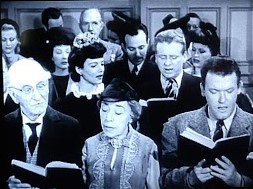 We join the congregation with the service in progress, with a unison reading of the 23rd Psalm. Then we hear a sample of the pastor’s sermon, “Changing the world in which we live will be impossible unless we change ourselves within... As good Christians remind your neighbors about the truth of the Gospel and the love of the Savior who died so you might live forever.”

We don’t get much of the preaching, but it does sound solid and orthodox. The service concludes with the hymn "Rock of Ages" (with a sound “Amen” concluding).

The gang seems genuinely enthused as they leave the service. Dora says, “I’m glad we went to church, Billy.”

Ma says, “Yeah, this is a nice little town. I feel like a heel taking their dough.” All seem to agree with the sentiment.

And those feelings are put into action. Ma quits the gang and joins the Ladies Aid Society. As Pa says, “Why not settle down and have everything we want, but on the level.”

Ma says of her sons, “The boys are tired of raising Cain. They want to settle down and raise rabbits.”

Of course, plot complications ensue. The real Richard Black, bank teller (still drunk), gets to town. And Jim doesn’t want to settle down and wants to take all the bank’s money to Mexico. The rest of the gang seem changed by this one church service, in heart and behavior. That rarely happens in real life, let alone in the movies.

And that's why we're giving the church in Walnut Valley, a church of unknown denominations, our highest rating of four steeples.

Posted by churchandstates at 5:40 AM