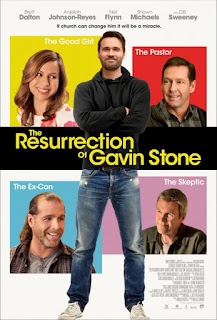 The Resurrection of Gavin Stone (2016)
Imagine you had an opportunity to see a production of Othello with the title role played by Jaleel White (Urkel of Family Matters). Or King Lear with the title role played by Danny Bonaduce (Danny of The Partridge Family).  I know, it’s too much artistic excellence, more than we could hope for in the real world. But in the film The Resurrection of Gavin Stone, we get a glimpse of what such a thing might be like.

Gavin Stone was a child star in a popular sitcom. His catchphrase was, “Don’t look at me!” (This is not a phrase that would rank up there with “What you talkin’ ‘bout, Willis?” from Diff’rent Strokes or “You got it, Dude!” from Full House, but maybe it was better in context.) Like many child stars, Gavin grew up to have a troubled life, partying his way into the headlines and then into court.

The premise of the film is that a judge sentences Gavin to perform 200 hours of community service, and he decides to do those hours in a church. (When offered a choice between working in a church or with a sewage crew, Gavin asks, “What’s the difference?”) I did wonder about a judge assigning community service hours in a church. Surely this would be a questionable matter, raising issues of boundaries between church and state. It seems like it would be one thing if a defendant offered to work at a church to fulfill the hours, but a judge assigning someone to work at a church seems rather bizarre.

Anyway, Gavin (Brett Dalton) goes to do janitorial work at the Masonville Bible Church. Which made me wonder about who usually cleans up at the church. Did they lay off the usual janitor to make budget? Does a chain gang from the local prison do their lawn care and shrubberies? Why not use the court appointed help to feed the poor? Perhaps build a playground in the neighborhood? But no, the church is taking advantage of the penal system to keep their floors mopped and waste cans empty.

It is rather odd that when Gavin arrives on the campus of this large church in Masonville, Illinois, he says to himself, “Toto, we’re not in Los Angeles anymore.” There are a whole lot of megachurches in Los Angeles. I’ve been to churches in Southern California that are much larger, more elaborate, much more other-worldly than the church shown in this film. 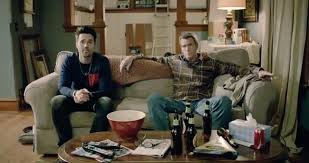 Still, Gavin isn’t thrilled about doing janitorial work. When he discovers that the church is doing a play, a life of Christ called “Crown of Thorns,” he watches the auditions only to see acting that’s more wooden than the average oak flooring. Gavin wonders if he can act in the play to cover his community service hours.  (See the recent review of A Walk to Remember, from Romantic Movie Churches month, for another example of drama as punishment.) Pastor Allan Richardson (D.B. Sweeney) tells Gavin that because the play is considered a ministry, only Christians are allowed to be a part of their dramas.

Here’s where the  fraud come in… Gavin lies to get in the play. He says he’s a Christian, but he’s not. (See the recent review of Christian Mingle for another of example of a fraudulent Christian.) He even signs a form that affirms he is a Christian.

The director asks why Gavin is there, and he replies, “I’m here for Jesus.” He means he’s there for the role of Jesus, but she takes it as a statement of his commitment to Christ. Gavin is asked to give his testimony, so he gives this little speech, “What you probably didn’t know is I’m a Christian. I had a God shaped hole in my heart. I decided to climb the stairway to Heaven and let Jesus take the wheel, let go and let God.”

Gavin auditions for the play using a Hamlet soliloquy and astounds everyone with his talent and professionalism. So the director casts him in the lead role of Jesus. The director is Kelly Richardson (Anjelah Johnson-Reyes), the pastor’s daughter and apparently the only other staff member of this big church. She runs the children’s program and directs the church plays. I assume she was the person who choose the play, and wonder why she picked a play knowing that she didn’t have the cast available to pull it off.

Kelly goes to her father to ask whether she should cast Gavin as Jesus. The pastor says, “Casting is your call. I think he needs us, as much as we need him. This is why we do this.”

And even with Gavin, she doesn’t have that great of an actor for the role of Jesus. Gavin’s portrayal of Jesus in the rehearsals is hammy to extreme. His performance is almost as bad as what you’d see in family sitcoms from the 1990’s. Kelly complains that Gavin doesn’t capture the humility of Jesus because he doesn’t have humility himself. There is truth to that, but really, that’s just one of many problems with his performance.

The film does raise an interesting question. Should a church only allow people to serve the church who believe in God and the ministry of the church? Obviously, a pastor should believe the things he preaches (though this month in Fraudulent Movie Churches we see even phony pastors, on occasion, do good). But must the choir director of a church be a Christian? How about the organist? The secretary? The janitor?

And if you put on a church play, should the actors go to the church? Is it important whether or not they believe in Jesus?

I watched the extras on the DVD that made it clear that the people involved in making the film didn’t make being a Christian a requirement for acting in the film. A pastor who helped in the production of the film interviewed Brett Dalton, acknowledging that Dalton isn’t a Christian. (The interviews with Dalton and other actors were painful to watch. The pastor doesn’t allow anyone to speak, but continually interrupts and talks over people.)

In the film, the people of the church treat Gavin with civility and kindness, even though he makes numerous missteps in the church culture. But I had to wonder, do they treat him kindly because they think he’s a new Christian just learning his way around or because he’s a minor league celebrity whose name and face on the poster will sell a lot of tickets for the Easter pageant?

In the church pageant spirit, I’m going to give the church the benefit of the doubt, and a Movie Churches rating of Three Steeples.
Posted by churchandstates at 12:06 AM