Fake Preacher (2005)
I have to admit upfront that I’m really not sure whether the “movie” we’re looking at this week, Fake Preacher, is a real movie. I watched it on Amazon Prime, where it was listed under “Movies,” and you can buy the DVD on Amazon as well. But at IMDb, Fake Preacher is listed as  (video) with no release date listed.  It’s listed as a Comedy, because it’s one of those funny films with multiple homicides. Though the actors are listed, many of the roles are not. I guess it’s just as well to finish up Movie Church Fraud Month with what seems to be a fraudulent film.

Fake Preacher was written and directed by Juney Smith, who had small roles in Lethal Weapon II and Good Morning Vietnam.This film is not like those films -- which had movie stars and a budgets. Fake Preacher is the story of a con man who goes by Reverend Unique (played by Eddie Goines). I’m guessing at the spelling, because I couldn’t find any list of credits with character names.

The Reverend isn’t really a Reverend, but he does have a television show that he calls his church. On the show he tells the audience, “I command you by God’s Word, who speaks through me, to send me money.”

He doesn’t depend on solely on the TV show, though. He also runs traditional cons. He and another man, Luke (John Flecha), go to see a woman, Sister Green. Luke claims he has an inheritance coming his way worth a half a million dollars, but before he can get what is rightfully his, he needs $5,000 for legal fees. It’s an old con, not unlike the Nigerian princes that contact you now and again. But the Rev. puts a twist on the campaign by saying, “I’m a man of God, and everything must be on the table.” He questions whether Luke’s request is legitimate, and in thanks, Sister Green donates $5,000 to the “church.”

Sister Green asks about the Reverend’s church, but he says his TV audience is his church. He tells Sister Green that he could use her help selling Section 8 (public housing), and she brings in other women for the project.

As a result of their help, Rev. Unique sees some potential in a brick and mortar church. He tells Luke that he has genuinely seen the light, and wants to start a real church. Luke agrees to leave the criminal life behind and become a deacon. We know this is actually a continuation of the scam, because the Rev tells his wife, Shaina, about it.

She tells him she’s supportive of his fraud, but not to get involved with women in his new “church.” She’s also busy a scam to rob automated teller machines.

The Rev. rents a building, which he identifies by putting the word “Church” on the doors. He asks Sister Green and the other women she’s brought along to recruit people for the church by asking, “Do you have time for God?” 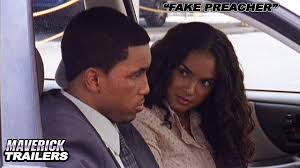 We hear from Deacon Luke that the church is thriving and the finances are great, but we never see a worship service. Just a guess here, but I’m thinking there wasn’t money in the movie’s budget for all those extras.

At a meeting of the women and the Rev, Sister Nell (Tanya Ruiz) says aloud, “I love you, Reverend Unique.” The Rev. and the other women tell Nell she can’t say such a thing, and she doesn’t understand why. They tell her to say, “I love your message.” But she won’t stop.

Nell stalks the Rev. and he eventually agrees to meet her alone at the park, and then the two sleep together.

Then he goes to Sister Green and asks for more donations to the church. She agrees, but only if he’ll sleep with her. He does.

Yet another women in the church, Sister Angela, says to him, “What are you worried about Reverend? You aren’t married. I know you’re my spiritual guide but you’re also my kind of man.” So Rev. Unique sleeps with her as well.

He tries to use these women to sell fraudulent real estate for him, but they seem more interested in sex. I should note that there is no nudity or explicit sexual activity in the film. We just get many shots of the Rev in bed with these women with sheets up to their necks. Which made me wonder about the intended audience for the film. This certainly wouldn’t be shown in most churches I know. But it wasn’t made for a more prurient viewers.

Things really start going downhill when Nell goes to see the Rev. in the church sanctuary. Deacon Luke is there, and Sister Nell wants to speak with Pastor alone, and he has no problem. (It should be noted here that there is real wisdom in pastors using discretion about being alone with members of the opposite sex).  Deacon Luke leaves.

“I just want to hold you and kiss you for one second,” Nell says.

“Give me one little kiss.”

“If you don’t give me a kiss, I’ll tell the whole congregation what we did yesterday.” He gives the kiss and she laughs like a villain. 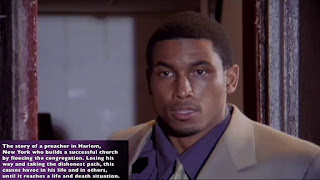 Then she goes rather crazy. She follows the Rev. home and finds out he is married. She sneaks into his house with a knife and, as he takes a shower, goes all Norman Bates on him. She stabs him in the arm, but he subdues her. He calls the police. The police don’t seem to think it’s necessary to talk with the Rev. or his wife, they just take Nell off in cuffs.

But the craziness goes on. Nell is let out almost immediately, and she murders the Rev’s other lovers, Sister Green and Sister Angela. She tries to murder Shaina, the Rev’s wife, but he stops her. Shaina wants to stab Nell, but the Rev., for some reason, lets Nell go -- and then calls the police.

When the police come, they come with Deacon Luke who we learn (from out of nowhere) is an FBI agent. Why this FBI agent did nothing to stop a crazy woman from murdering people is not explained. Luke arrests the  Rev. and Shaina, having gathered information about both of their criminal schemes.

Then we then get a short scene to end the film, introduced with, “TEN YEARS LATER.” The Rev. and Shaina have both become Christians in prison and lead Bible studies and thriving ministries. It doesn’t even seem to be a con, because they are telling each other these things. Unless the Rev. is conning Shaina now.

All I know for sure is I’m giving the church in Fake Preacher just one steeple because I can’t give less.

(Though I should say the gospel song that plays in the credits, “He’s Watching” by Kyle Jason, is pretty good.)

Posted by churchandstates at 12:04 AM

Email ThisBlogThis!Share to TwitterShare to FacebookShare to Pinterest
Labels: fraud