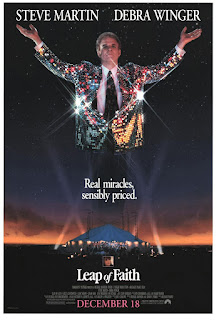 Steve Martin, in his early years, was a busker. A busker is a street performer who does anything he can to entertain people so they’ll throw money in the donation cup. Martin learned to juggle, to play the banjo, and to do magic tricks. He brought his tools to Knotts Berry Farm and Disneyland and delighted in delighting others.

In 1992’s Leap of Faith, Martin plays evangelist Jonas Nightengale as a busker. His prime goal is to entertain the crowd so they’ll put money in the offering plate. His preaching a mash-up of all kinds of Scriptures put together with the most positive of spins. His crew brings a trailer full of crutches and wheelchairs to allow for spectacular fake healings. And he brings a black gospel choir to provide amazing music. (When they sing “Jesus on the Mainline” he asks “Am I in white boy heaven or what?”)

More than anything he provides the illusion of the supernatural. He and his assistant Jane (Debra Winger) use early 1990’s internet technology to research people in order to pretend to have second sight. They use “mind reading tools”, such as word codes to convey information (I remember reading about the technique in the kids’ book The Great Brain at the Academy.)

He does have a bit of integrity. If anyone asks, he admits he’s just a showman. But while he’s performing, he commits to the role. 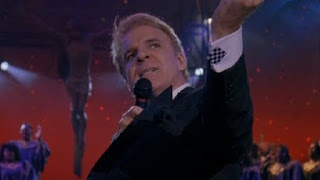 In the film, Jonas and his troop get stranded in a small town when their bus breaks down. Since they’re there, they decide to put on a show. Their signs claim “Miracles and Wonders,”  “Angels of Mercy,” and “Come and Be Saved - Every Night at Sundown.”

And the people of the town do come, because the town is troubled. It’s a farm town, and there is an ongoing drought. People are out of work and suffering. The sheriff is not pleased with the new show in town. He says, “This town can’t afford a revival!”

In fact, the sheriff (Liam Neeson) becomes so angry with Jonas that he interrupts one of the tent meetings. He goes before the crowd and announces that Jonas is using a false name and has a criminal record. Jonas responds (to the crowd as much as to the sheriff) that all the sheriff said is true. God has made him a new man. And the people love Jonas for it.

But there are two people in town who stand out from the crowd. There is a waitress in town, Marva (Lolita Davidovich) who has a crippled younger brother, Boyd (Lukas Haas).  After Boyd was in an accident which injured his leg (and killed their parents), his grandparents took him to a faith healer. The faith healer blamed Boyd, saying his lack of faith was preventing the healing.

Jonas comes to like the kid. He warns Boyd that his show is just for suckers.
But Boyd does have faith. The boy says he believes God has a purpose in all things, whereas Marva has given up on God and faith. That’s too much even for Jonas.

But then something happens that Jonas isn’t ready for: there’s a real healing. When that happens, things are no longer under his control. He can’t leave town soon enough. And as he’s leaving town, it begins to rain -- even though he just wanted to put on a show.

In show biz, they talk about the dangers of kids and animals stealing the show, but Jonas finds out there’s no show stealer like God.

Jonas is a fraud, but he doesn’t get too much in God’s way, so I’m giving him and his revival meetings a very generous two steeples.
Posted by churchandstates at 12:29 AM