Michigan films on the small screen 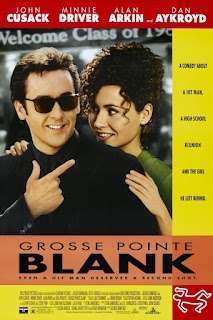 In the Ben Rector song, “Brand New,” the lyrics include, “I feel like a young John Cusack, like making big mistakes, I feel like the first time in a long time I am not afraid, I feel like a kid, never thought I’d feel like this.” There was a time, in the last decade and a half of the previous century, when it seemed John Cusack could do no wrong. Guys of a certain age wanted to be the guy in Better off Dead and Say Anything because he expressed our doubts and insecurities in such a charming way that he would win the girl. That's what movie stars do, they make you want to be them, even if it's just for a couple of hours.

Sadly, age happens, and Cusack couldn’t keep that boyish charm forever, but he still had it -- even playing a contract killer* in the Michigan film, 1997’s Grosse Pointe Blank. This film was made toward the end of Cusack’s golden age. It’s like Lloyd Dobler of Say Anything made a tragic turn, say, killed someone kick boxing, and didn’t know how to turn back. 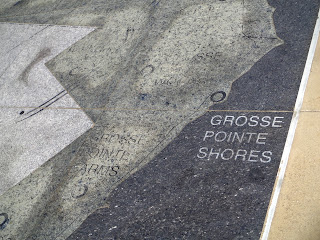 The film is set at Martin Blank’s (Cusack’s) high school reunion in Grosse Pointe, Michigan. Though the film is violent and full of dark humor, it’s ultimately about whether God offers redemption to the worst of sinners, which is not a bad theme for Movies Churches. Like all of the films discussed later in this post, Grosse Pointe Blank was chiefly filmed in MIchigan. (A recurring joke in the film is people driving foreign cars in the nation’s car capital.)

There are some movie stars who keep their charisma as they age, perhaps even add to their appeal. John Wayne was like that. Clint Eastwood is certainly like that. In 2008’s Gran Torino, Eastwood plays Walt Kowalski, a cranky, charming, but bigoted old man who befriends a Hmong neighbor boy. A classic American car plays a key role in this Michigan film, but so does a priest and a church (the film deserves a post of its own someday).

Like Eastwood, Jack Nicholson managed a long starring career until his apparent retirement in 2010. For nearly half a century, he was considered one of the greatest actors on the screen. In 1992’s Hoffa, Nicholson played the notorious labor union leader, Jimmy Hoffa, whose career and disappearance had a great impact on the Detroit automobile industry.

Eddie Murphy’s heights of stardom were more short lived. Like Cusack, his best regarded films were in the 1980’s and 1990’s. But for a time, people went to his films sure they would laugh and spend time with a very fun guy. Perhaps he reached his peak in 1984’s Beverly Hills Cop, which you might guess from the title, doesn’t all take place in Michigan. But the opening scenes are in Detroit, and the whole point of the film is what a fish out of water a Detroit cop is in the posh world of Beverly Hills.

The woefully uneducated might not realize that Peter Weller is one of our great movie stars, but he played the hero of The Adventures of Buckaroo Banzai Across the Eighth Dimension, one of the greatest films ever made, so I rest my case. Weller’s great Michigan film is 1987’s Robocop, in which he plays a Detroit cop of the future who is almost killed in the line of duty. What is left of his mind and body after a shooting is made into a robotic police officer. There is an ongoing campaign to place a Robocop statue in Detroit.

Weller might be considered more of a cult star than some, and the same can be said of Gary Oldman and Christopher Walken. Both of actors appear in the 1993 noir film, True Romance, along with an actor whose career was just beginning, Brad Pitt. The violent and darkly humorous film was written by Quentin Tarantino and directed by Tony Scott. It begins in Detroit but moves on to Los Angeles.

Richard Pryor was one of the most influential stand-up comics of all time, but he was also a box office power for a time (particularly for his films with the late Gene Wilder). 1978’s Blue Collar is a film about a car factory worker who, with friends, robs the local union. Written and directed by Paul Schrader, it was filmed in Detroit and Kalamazoo.

Also written and directed by Paul Schrader is 1979’s Hardcore starring Oscar winner (for Patton) George C. Scott as a businessman looking for his daughter. He becomes entangled in the world of pornography. Schrader fought to get Scott in the film, calling him “one of the greatest actors in the world.” The film begins in Grand Rapids but moves to California (where some church locations were used).

George Clooney is one of the few actors currently working that fits Hollywood’s old standards of movie stardom. 1998’s Out of Sight is based on an Elmore Leonard novel and won that year’s best film award from the National Society of Film Critics. Locations in a number of states were used for filming, including Detroit and Bloomfield Hills in Michigan.

Finally, one of my all time favorite film actors was Jimmy Stewart, who starred in 1959’s Anatomy of a Murder. The film was based on a novel by Michigan Supreme Court Justice John Voelker which was based on a case he argued as a defense attorney. Stewart plays a defense attorney battling (in court) against a prosecutor played by George C. Scott. Most of the film was shot in the Upper Peninsula of Michigan, using such locations as Ishpeming, Marquette, and Big Bay. The film pushed boundaries of the time, especially the language used to discuss sex and rape.

*I look over this list and see that none of these films would be first picks for family viewing. Maybe there is a reason that Detroit is called the “Dirty D.”
Posted by churchandstates at 8:00 PM