Michigan movies on the big screen 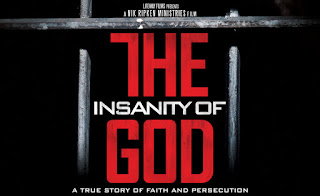 The Insanity of God
I was tempted to tattle-tale on the church group. They were in good spirits, obviously excited to be together to see a film promoted by their church, so someone was taking a group photo INSIDE THE THEATER. I witnessed this just moments after I had just been helpfully informed by a Regal theater (assistant?) manager that it’s against Regal policy to take photos inside the building.


I was attempting to take a picture of a display promoting the Regal Theater Membership program, but apparently it’s a secret club, and they don’t want too many people knowing about it. Because secret societies are cool. So, naturally, when I saw people taking pictures inside a theater, I was concerned. What if these people were corporate spies pretending to take a fun group shot but actually scouting out top secret information about Regal Cinema’s seating configurations? I took a risk, gave them the benefit of the doubt, and didn’t report them.


The group, like us, was there to see the first feature film from LifeWays Films, The Insanity of God. LifeWay is a media organization under the auspices of the Southern Baptist Church. (LifeWays used to have a quarterly publication of skits and dramas for church use, and they published some of my work. So obviously they are good people.)


The film is a documentary about Nic and Ruth Ripkin, former missionaries to Africa, based on their book of the same name. The couple narrates the film, telling their life story and about interviews they have conducted with Christians persecuted for their faith. I’m sorry to say that, as a film, The Insanity of God would make a fine series of podcasts. 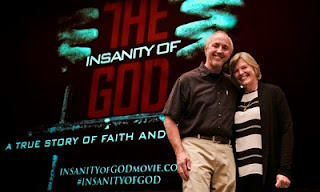 For some reason Nic and Ruth’s faces are photographed in shadows throughout the film. I assumed they were afraid that if their faces were seen, it would hinder their ministry in the parts of the world where the church is persecuted. But old photos of Nic and Ruth appear frequently. I was concerned that even though their faces were photographed in shadows, a government agency that wanted to know what they really looked like could enhance the lighting of the film. Then my thinking went another direction, and I thought perhaps they had been tortured for their faith. Perhaps their faces were hideously deformed, so they kept them hidden. But at the end of the film, the couple is interviewed with normal lighting, and I realized that there was really no good reason for their faces to be hidden throughout the film. It was just an annoying distraction. As was the fact that the title was never explained.


The film used some dramatic reenactments of events in the couple’s life. From photos we see that Nic in his younger years was bearded and wore glasses and was slightly gawky. But he is portrayed in the reenactments by an actor who looks very much like Chris Pine (Captain Kirk from the new Star Trek films). The same actor portrays Nic throughout several decades of life without aging. This is really the way to do it. If anyone makes a film of my life, I want them to use a young Chris Pratt impersonator to portray me in my 30’s, 40’s and 50’s.


The film does tell some powerful stories of Christians who were persecuted in the 20th century and who continue to be persecuted in Communist and Muslim nations. There is an amazing story of a man in the Soviet Union who was jailed for years. He began every day in prison with a song. The song is performed in the film by Todd Smith, an American Christian singer. In one of several of the film’s epilogues, Smith admits he doesn’t speak Russian and isn’t sure he pronounced things properly. I was curious why they didn’t hire, oh, I don’t know, perhaps a Russian to sing a Russian song. And the song is never, even through subtitles, translated into English for the audience.


Since it is a Baptist film there is, of course, an altar call at the end of the film. After a couple of hours of Nic Ripkin narrating his own story, a LifeWays executive interviews Nic and Ruth Ripkin on camera. Then the pastor turns to the audience and asks if anyone has been led by the film to accept Jesus as their Lord and Savior. (I do think the percentage of non-Christians who made it to the one-night-only screenings of this film was substantially lower than the percentage of non-Christians who attend an average screening of Suicide Squad, but you never know.)


The pastor on the screen then closes the film in prayer. As the pastor prays, he closes his eyes. Which made me think, should I be closing my eyes even though this isn’t a live prayer? I wondered, did the cameraman close his eyes when the pastor prayed? Did the film editor close his eyes? Could I possibly be the first one watching this footage of this pastor praying? And come to think of it, is there anywhere in the Bible where we are instructed to close our eyes when we pray? This is a film that really made me think.


I admire the Ripkins and the bold believers they interviewed. But this film did not present their story very effectively. 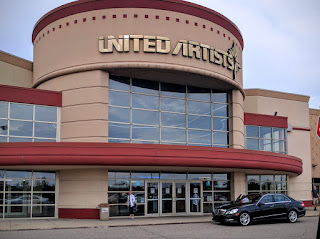 And I do hope you notice that we honored the policy of this Regal Theater and did not post any pictures of the inside of the theater. Perhaps they have this policy because they believe their theater is not properly abiding by sanitation codes and if pictures are posted online, inspectors will close the theater down. Perhaps the employees of this theater would be embarrassed if their families knew they worked for a Regal Cinema. Perhaps this Regal Cinema is used for nefarious criminal activities. We just don’t know the reason for this no photos inside the theater policy, but gosh darn it, we’re going to honor it.
Posted by churchandstates at 6:25 AM