Seen on the Small Screen in Wisconsin 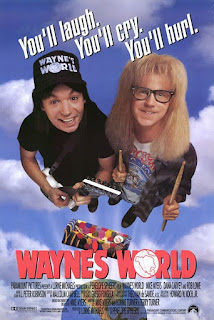 Wayne’s World began as skits on a TV show (Saturday Night Live) before it became a movie about a TV show. Mike Myers and Dana Carvey were part the SNL cast during of one of the enlivened periods of Saturday Night Live (which is at times lauded as brilliant and then proclaimed dead). Myers and Carvey wrote the skits for the show and wrote the film. It’s about a couple of young guys who still live with their parents whose claim to fame is a cable access show.

Admittedly, most of the film takes place in Illinois (some was even filmed there, but it was chiefly filmed in Canada) but part of the film does take place in Milwaukee where Wayne and Garth go to an Alice Cooper concert. Upon arrival in Milwaukee, the friends recreate title sequence from Laverne and Shirley, the classic Milwaukee sitcom. A little later, Wayne and Garth meet Alice backstage where he gives them a lecture on origin of Milwaukee’s name.


Wayne Campbell: So, do you come to Milwaukee often?
Alice Cooper: Well, I'm a regular visitor here, but Milwaukee has certainly had its share of visitors. The French missionaries and explorers were coming here as early as the late 1600s to trade with the Native Americans.
Pete: In fact, isn't "Milwaukee" an Indian name?
Alice Cooper: Yes, Pete, it is. Actually, it's pronounced "mill-e-wah-que" which is Algonquin for "the good land."
Wayne Campbell: I was not aware of that.

There are no churches in Wayne’s World, so I’m hard pressed to come up with a Movie Church angle except this: Alice Cooper these day identifies as an Evangelical Christian. From an interview with Cooper in my hometown newspaper, The Press Democrat:

PD: When you come to Santa Rosa, you’ll be playing in a former church. Do you like the idea of that?
AC: I don’t have a problem with that. It’s a theater now, you know.
PD: Church can be a theater too, right?
AC: It is, depending on what you believe in. If it were a church being used as a church now, I might have a problem with it.
PD: You’re a born again Christian?
AC: Yeah, well if you’re a Christian, it goes without saying. I think a lot of people have a weird concept of ‘Christian’. Christian is your one-on-one relationship with Christ.

Later in the interview Cooper says, "Being Christian might be the most shocking thing I ever did."

Oh, the Milwaukee scenes in Wayne's World were filmed in Canada.

Not surprisingly, other Saturday Night Live cast members went on to make movies with Wisconsin connection. 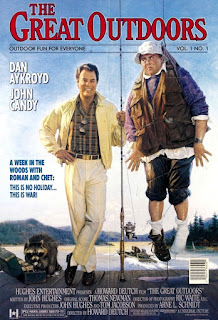 Dan Aykroyd, part of the original cast of SNL, plays a Chicagoan who takes his family on vacation in the Wisconsin woods in the 1988 comedy, The Great Outdoors. His rest is disrupted by an in-law played by John Candy (cast member of the skit show that rivaled SNL, SCTV). The film was written by John Hughes, the eighties teen comedy guru. In this film, the woods of Wisconsin are played by Yosemite National Park in California.

Chris Farley (who had a cameo in Wayne’s World) and David Spade were part of a slightly different era of SNL’s existence, and they made a film much beloved by my nephews, 1995’s Tommy Boy. Most of the film, about a shlump who must save his family’s auto parts company, takes place in Ohio; Farley’s character, however, is a graduate of Milwaukee’s Marquette University. But the whole thing was filmed in Canada anyway.

Most SNL- related films have been viewed as crude and populist, but 2011’s Bridesmaids was nominated for two Oscars (for screenplay and best supporting actress for Gilmore Girls’ Melissa McCarthy). I don’t think the films connected to SNL became more classy, it seems more likely the Oscars are less so. The film, about the competition to be the maid of honor in a wedding, was produced by Judd Apatow (of the great one season skit series, The Ben Stiller Show) and directed by Paul Feig (creator of a great one season TV comedy, Freaks and Geeks). This film was not only chiefly set in Milwaukee, it was actually filmed in Milwaukee.

Saturday Night Live may have cleared the path for off-color humor on television, but perhaps no show has crossed the line of taste for the sake of laughs as much as South Park. That show’s co-creators starred in 1998’s BASEketball, a film that guaranteed the rest of Trey Parker's and Matt Stone's careers would be spent behind the camera. Parker and Stone play the inventors of a new sport, a combination of baseball and basketball, and the stars of a new team, the Milwaukee Beers. The film was written and directed by David Zucker, one of the creators of the wonderful, barely one season, comedy Police Squad. The film was made in California.

One comedy actually did film in Miller Park, the Milwaukee Brewers stadium. 2004’s Mr. 3000 starred Bernie Mac as a 47 year old ex-major leaguer who got back in the game to try to reach 3000 hits. Mac was also the star of a successful Fox sitcom, The Bernie Mac Show.

Robin Williams had his first big break on a sitcom, Mork and Mindy. One of his last films, the horrible Merry Friggin’ Christmas (reviewed earlier) is set in Wisconsin, but was filmed in Georgia. 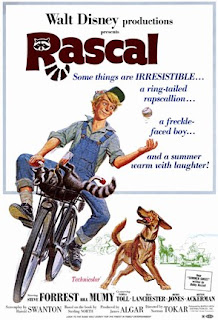 Technically Billy Mumy was never in a TV comedy. But if you watch Lost in Space these days, it’s pretty darn funny. (Try not to laugh at Robot swinging his arms proclaiming, “Danger! Will Robinson! Danger!) Lost in Space may well be funnier than the 1969 Disney comedy Mumy starred in. It was about a domesticated raccoon, Rascal. Though set in a small town in Wisconsin, the film was made in California.

Molly Ringwald has an even more tenuous link to TV comedy, but she has been on Saturday Night Live. She voiced Anne Frank. For Keeps was the last film in which she played a teenager; she portrayed a high schooler who becomes pregnant. It was set and partially filmed in Madison.

Someday I plan to write a full Movie Churches review of Lars and the Real Girl (starring Ryan Gosling). It may sound odd that a film about a man who develops a relationship with an anatomically correct doll that he finds online has good things to say about the church, but it does. Though Gosling doesn’t have much of a connection to television comedy, his film co-star Emily Mortimer stars in an HBO comedy, Doll and Em. Though Lars and the Real Girl is set in a small town in Wisconsin, it was filmed entirely in Canada.

So once again, the majority of films set in this week's state were filmed elsewhere. When will filmmakers realize that Wisconsin is worthy?
Posted by churchandstates at 12:00 PM