Florida films on the small and large screen

On the small screen
When you watch Joe Dante's Matinee you get two movies for price of one. (But since we were watching the movie on a DVD collection with ten films which we bought for five dollars, the math is more complex than that.) Mant is a silly science fiction film about a "part man, part ant" and Matinee is about a movie producer bringing that film to a small town in Florida during the Cuban Missile Crisis. Dante (best known for Gremlins) captures the period and place quite well in this sweet little film with a fun performance by John Goodman as a cut-rate AlfredHitchcock. 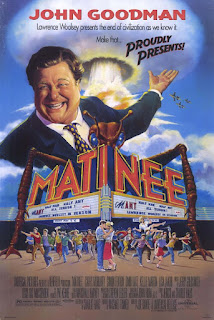 The film also features kids dealing with the fear of nuclear apocalypse, giant ants, and perhaps most frightening of all, the opposite sex. It's a great little film that not many people remember. It doesn't work well for a church film, but it is a great Florida film.

There are tons of Florida films, so I won't even pretend to cover them all. There even a ton of Miami films. There is the 1941 Don Ameche, Bette Grable musical, Moon Over Miami, which was actually filmed in Florida -- which was unusual back in the day. Miami Blues is a dark but intriguing noir, also filmed in Miami, with a young Alec Baldwin. And I should mention Michael Mann's feature film of his TV show, Miami Vice, though I didn't enjoy the movie as much as the show.

There are many crime films set in Florida, contrasting the dark world with the bright sunshine. Humphrey Bogart's Key Largo (1948) is set and filmed (partly) in Key West, Florida. Scarface, directed by Brian DePalma and starring Al Pacino, is incredibly violent but over three decades after its release is still a powerful cultural phenomenon. Night Moves, a detective noir with a fine Gene Hackman performance, is partly set and filmed in Florida. A contender for the best prison film ever made, Cool Hand Luke, starring Paul Newman, was set and filmed in Florida. 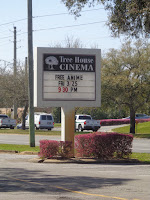 On the large screen
We were intrigued by the name of a theater in Gulf Breeze, Florida --  Tree House Cinema. I think in my heart of hearts I was really hoping to need to climb a rope ladder to see our film. But no, it's just a normal movie theater in a strip mall. We asked an employee why the theater had that name, and he replied it was because the owner of the theater really loves tree houses. There were tree decorations in the place, including some schematics for tree houses. There were also posters of comic books that were there for no apparent reason. 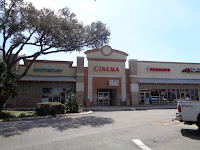 Besides the intriguing name for the place, we went there because they were playing Charlie Kaufman's adult animated feature, Anomalisa. If you are wondering if you should see this film, you should probably see several other films by Charlie Kaufman first. Watch Eternal Sunshine of the Spotless Mind, Adaptation, Being John Malkovitch, Synecdoche, New York, and then, if you're still interested, watch Anomalisa.

A bonus when we went to the film was that we were the only ones in the theater, so we could say aloud, "He really could pick up the pace here," or "I think that puppet nudity was entirely gratuitous" without disturbing anyone else. 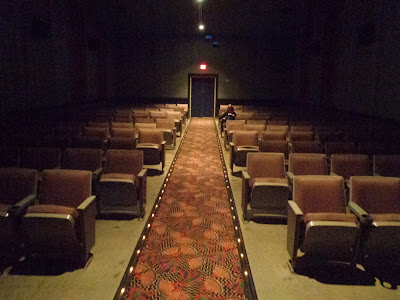 One more thing about the Tree House Theater: the names for their snack packs are awesome. 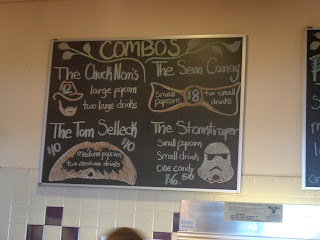 Posted by churchandstates at 10:08 AM