Seen on the Big Screen (in Oklahoma) 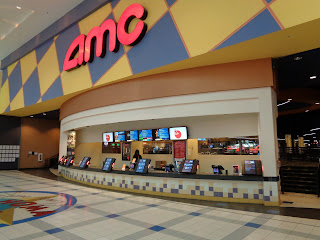 Some time this year we hope to go to a drive-in movie, but this week we had to settle for a drive-in Food Court that was adjacent to an AMC theater in the Quail Spings Mall in Oklahoma City. There were twenty-four theaters in the food court,featuring all the films nominated for the Best Picture Oscar. 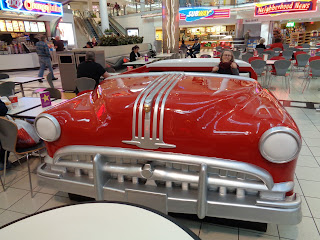 But we saw something different. I wanted to see Charlie Kaufman's Anomalisa, but that animated film was showing at the wrong time. So we went to Pixar's The Good Dinosaur. Our Oklahoma film reminded me a lot of our Texas film, The Revenant. Sure, one was a PG "family" film and the other was an R rated revenge tale, but both are tales of survival with extraneous nature shots. From the Movie Churches perspective, both films' most outwardly religious characters are the villains. 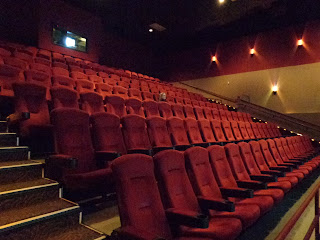 Tom Hardy's character in The Revenant speaks much of God even while practicing cold blooded murder. In The Good Dinosaur, Steve Zahn voices Thunderclap, a Pterosaur who worships the Storm (even giving thanks to it before he eats). He also is a ruthless killer. We've learned from movies you can't trust those religious types. 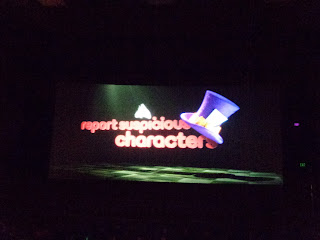 Fortunately, the theater itself warns of "Stranger Danger". 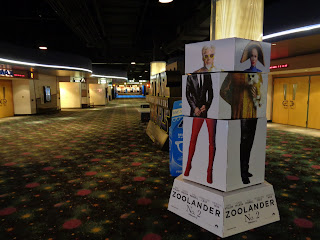 As for upcoming films, we may see Zoolander 2, but how can the film live up to the fun of this most excellent lobby toy.

Posted by churchandstates at 8:03 PM