Seen in Oklahoma (on the small screen)

When we were choosing the films we'd watch in every state, much thought and research went into choosing the film for Oklahoma. So, I'm imagining the surprise and jaws a'droppin' when you learn we went with Oklahoma! The 1955 musical is as corny as an elephant's eye (I think that's how the lyrics go) but it still is fun, and it has a classic score. Very talented people were involved, though the star, Gordon MacRae, did very little else that anyone cares about. The director, Fred Zinnemann, won two Oscars (for From Here to Eternity and A Man for All Seasons), and Shirley Jones and Rod Stieger went on to win Oscars as well. 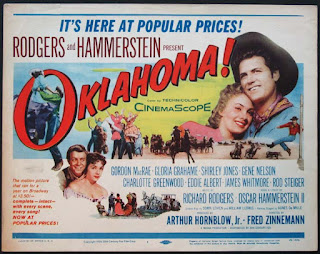 As for the Movie Churches angle, there's not much to be found in the film. Even when Laurey and Curly get married (SPOILERS!), the service doesn't seem to be performed by a member of the clergy. But one of the reasons I was happy to see it was that I was in the play in high school. (I played Jud Fry and, as I've tried to explain to many through the years, he's not a villain; he's just misunderstood.)

The real disappointment was to discover that the film was not filmed in Oklahoma but rather in Arizona (and California studios). But that's OK.

There are other films that use the state name in the title. There's Oklahoma Crude with George C. Scott and Faye Dunaway. But I haven't seen it.

There's The Oklahoman, a western with Joel McCrea, but I haven't seen it either.

Someday I must see The Oklahoma Kid with the most incredibly unlikely Western stars, James Cagney and Humphrey Bogart, but I haven't yet. And none of them were actually filmed in Oklahoma. 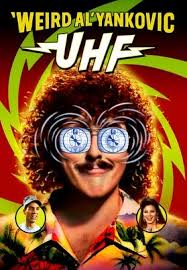 But perhaps the greatest film set and filmed in Oklahoma is the masterpiece written by the great "Weird Al" Yankovic. Sadly, UHF still awaits the critical appreciation and public adoration it deserves.

Posted by churchandstates at 2:58 PM