Arkansas films on the small and big screen 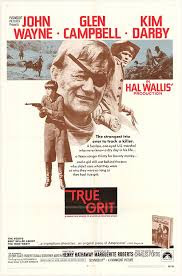 On the small screen
For whatever reason, great books aren't often made into great movies. Last week we were in Missouri, and I couldn't think of a great film that has been made from any of Mark Twain's great novels. But Charles Portis' great novel, True Grit, has not just had one, but two great adaptations.

We watched the 1969 version directed by Hollywood workhorse Henry Hathaway and starring John Wayne in his Oscar winning role of Rooster Cogburn. This version tweaks the ending of the novel in a few ways, actually making the ending a little darker (Hollywood usually makes things happier). Ethan and Joel Coen's 2010 version is even more faithful to the book and also great fun. Neither film has much in the way of church, though the early version has a hymn at a hanging. 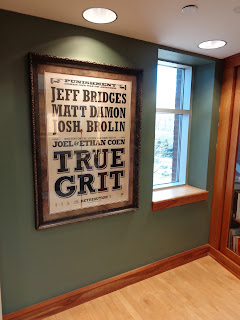 A bizarre thing about both versions is that though they have scenes that are set in Fort Smith, Arkansas, neither version did any filming in Arkansas, preferring Colorado, Texas, and New Mexico for some strange reason.

But Hollywood has come to Arkansas at times. Two exploitation films from the seventies, Martin Scorsese's Boxcar Bertha and Burt Reynolds' White Lightening, were set and filmed in Arkansas.

Arkansas native son Jeff Nichols, one of my favorite new filmmakers, has set and filmed work in Arkansas. Shotgun Stories, his first feature, is set and filmed in Arkansas, as is his Mud. Mud is like a modern day Tom Sawyer and Huck Finn story; the best Twain on the screen isn't Twain (and better than any that is Twain).

Maybe the best film ever set and filmed (at least partially) in Arkansas is A Face in the Crowd, directed by Elia Kazan, written by Budd Schulberg  and starring Andy Griffith. It's about politics and is sadly still quite applicable to the current political scene. 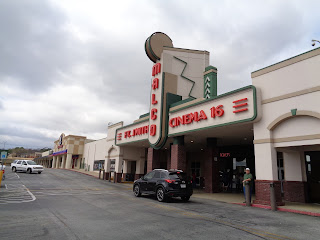 On the big screen
In Fort Smith we went to a Malco Theater (a theater chain that just celebrated its hundredth anniversary) in the local mall to see last year's BBC feature, The Lady in the Van.

There's not much to say about the theater, except it was the first theater we've been to that sells pickles (and it had an ice cream vending machine).

The film did have a church angle as the Lady was a former nun. I'll just say the church doesn't come out smelling too sweet in the film. We were not surprised that a film starring Maggie Smith drew an elderly audience. We were surprised that someone brought a six year old girl (maybe she's a big Downton Abbey fan). 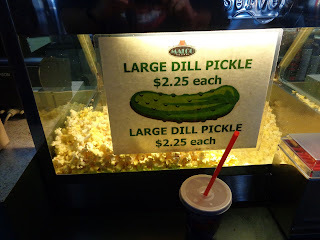 Posted by churchandstates at 6:08 PM