Louisana films on the small and big screen

On the small screen
Miller's Crossing isn't set in New Orleans, but it was filmed there. Last week, I wrote about the Coen Brothers' True Grit, which was set in Arkansas but not filmed there; this week's Coen Brothers' film is the opposite of that. It's supposedly set in a Northeastern city, but anyone can see that it's really the Big Easy. Miller's Crossing is a film noir, the dark genre of crime films that began just after World War II with origins in the detective fiction of Hammett and Chandler.

Noir films have been set in New York and San Francisco and, of course, LA --LA as in Los Angeles and LA as in Louisiana. There are no specifically church or religious elements in Miller's Crossing, but like all noir, the doctrine of original sin comes through quite clearly.

Other Louisiana films with noir elements include The Big Easy with Dennis Quaid and Ellen Barkin, Eve's Bayou with Sam L. Jackson and Hush ... Hush, Sweet Charlotte with Bette Davis.

Some of the best films about the African American experience were set and made in LA (not Los Angeles), including Best Picture nominees Beasts of the Southern Wild and Sounder and Best Picture Winner 12 Years a Slave. Some great women's films have been set and made in LA such as John Sayles' critically acclaimed Passion Fish. There is also Steel Magnolias, which many women love, perplexing many men. There are LA guys' films, such as Swamp Thing based on the DC horror comic, and Walter Hill's action feature Southern Comfort.

And a film with two of the greatest performances ever captured, Vivian Leigh and Marlon Brando's work in A Streetcar Named Desire, is set and partially filmed in New Orleans.

There are many other good and awful films set and filmed in Louisiana, but I'll mention just one more excellent film: Dead Man Walking. This film will kick off a month of clergywomen at Movie Churches (check back for that on Thursday).

On the Big Screen 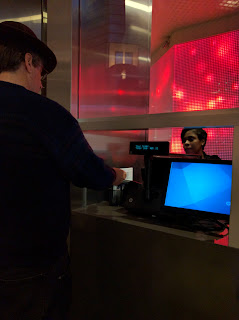 Mindy and I went to see one of the classic noir films, The Maltese Falcon for a 75th anniversary screening at the Theaters at Canal Place in New Orleans. It's a fancy schmancy place with neighbors like Saks 5th Avenue and Tiffany's. An usher directed us to our seats and pointed out the red button we could press to order food. We ordered popcorn, but popcorn with truffle oil. 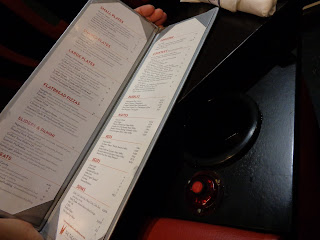 Posted by churchandstates at 5:25 PM