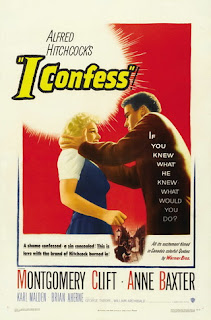 Comparing this film with last year's "Calvary," another film coming up in Movie Churches' Confession Month, one sees a startling contrast between contemporary views of the church over the sixty year gap.

In "I Confess," everyone in the film seems shocked by the very notion that a priest might have committed a murder. Two young women spotted a man in a cassock at the scene of the murder (actually, the killer borrowed a priest's robe). The reaction of one of the police officers to this testimony? "It's absurd that a priest would be involved [in the murder.]" And the conversation in the district attorney's office?  "'The unpleasant part is a priest is suspected.' 'What nonsense!'" The very idea that a priest would be guilty of such a crime strikes the average character in the film (and, one assumes, the people in the audience) as outlandish.

Sixty years later, in the film "Calvary," after scandals with pedophile priests, the characters in the film and many people in the audience assume the very worst about priests and the Catholic Church. Killer priests have become a cliché in movies. Priests are even more likely to be the villain a film than CEOs and right wing politicians.

The priest of "I Confess" (actually, there are several priests in the film, but I'm talking about the featured priest, played by Montgomery Clift) is far from a villain.  Father Michael is widely respected in his community and quite trusted. He is so trusted, in fact, that when the monastery's caretaker, Keller (killer) commits a murder, he confesses the murder to Father Michael in full confidence that the priest will honor his vows and the sanctity of the confession and not reveal the truth.

His confidence proves to be well founded. Even when Father Michael is accused of the murder of a corrupt local lawyer; the priest will not reveal what he heard in confession.

The killer plants the bloody robe in the priest's car. When Father Michael testifies in court, he is asked, "Who might have put the robe in your car?" The Father takes a moment before answering. The film is set in Quebec, and a crucifix hangs above the Father's head. He answers the question truthfully but in keeping with his vows, "I can't say."

The prosecution in the trial must, of course, ascribe a motive for the priest to kill the lawyer. It is discovered that the lawyer was blackmailing the priest's former girlfriend, and the priest is alleged to continue to have a romantic relationship with the woman. This isn't true, but suspicion is planted in the mind of the public.

The priest is acquitted in the trial, but is still suspected of murder and adultery by many. Father Michael comes to know the experience of Christ: being despised and rejected by men. In time, (Hollywood being Hollywood) the true killer is revealed, but one suspects that Father Michael's experience will result in his being an even better priest.

Of course, we're here to review the Movie Church and not the movie. Which is just as well, because if you like movies, the fact that this film was directed by Alfred Hitchcock is reason enough to watch the film. Hitchcock was educated by Jesuits and many film study papers have been written about the themes and symbols of Catholicism and Christianity found in his films. In this film, those themes provide the text, rather than the subtext.

As for the Movie Church in this film...a Movie Church that has a priest with the integrity of Father Michael, willing to give his life to prison or the gallows rather than break his vows, gets this film four steeples.

-- Dean
Posted by churchandstates at 8:23 AM