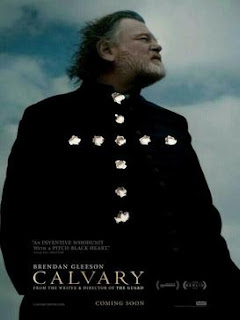 It's also a good introduction to some of the themes of the film, most obviously that the priest in the film is facing his own cross, his own Calvary. But the film is filled with many more thieves. The small town in which Father James (played by Brendan Gleeson) ministers seem to be the very incarnation of 2 Timothy, chapter 3 (For men will be lovers of self, lovers of money, boastful, arrogant, revilers, disobedient to parents, ungrateful, unholy, unloving, irreconcilable, malicious gossips, without self-control, brutal, haters of good, treacherous, reckless, conceited, lovers of pleasure rather than lovers of God"), a bunch of thieves mocking Christ on the cross.

I'm not reviewing movies here, only the movies in the churches along with the movie clergy. This church and this priest look very good because they stand in comparison to some very awful people. What makes the situation even more interesting is that the awful people in the film look down on the priest and the church.

The film opens with the priest hearing a confession which isn't really a confession. Instead we hear a man describing to the priest about how he was sexually abused by a priest when he was a young boy. He explains that the church did not punish the priest, who lived a long life and is now dead. And so that is why, the man explains, he will kill Father James the upcoming Sunday.

Everyone in the film is quite aware of the pedophile scandal in the Roman Catholic Church and seems to believe that this scandal takes away the moral standing of the church. Everyone in the town seems to believe the church no longer has a role in making moral judgments. In fact, strangely enough, the pedophile scandal affirms many aspects of Christian doctrine. It affirms the doctrine of original sin and the danger every believer faces of falling into sin. It also affirms the deadly nature of sin in a society that has been arguing that no aspects of sexuality are sinful since, as Woody Allen said, "The heart wants what the heart wants."

Father James is, for the most part, a good priest and a good man. But people look at his robes and refuse to take to heart his loving words and helping hand because he is a priest in the Catholic Church. Currently, plenty of people in the United States are anxious to dismiss the evangelical church because of its stand on homosexuality or gay marriage. At heart, I think the real issue is often just a desire to feel morally superior by declaring a political stance rather than needing to live out this verse (James 1:27, NIV): "Religion that God our Father accepts as pure and faultless is this: to look after orphans and widows in their distress and to keep oneself from being polluted by the world."

I do have my own problems with Father James. We see him giving one particularly bad piece of advice to a young man who is considering joining the army. The reason the young man gives gives is that he thinks shooting people will help him deal with his pent up lust, which he can't deal with in this small town with few women. The Father's council includes some rather unbiblical sentiments. First he condemns anyone who joins the services in peacetime as being apsychopath because the Bible says, "Thou shalt not kill". And he advises the guy to use pornography and to go to the big city and find slutty women. Why he doesn't advise the young to go to the big city and find a church where he can meet some nice Christian woman whom he can marry? Baffling.

There is another priest in the parish that proves to be a sniveling weasel, and the church building itself proves to be not up to fire code. But because you see Father James giving communion to the awful people of his town with loving compassion, I'm giving this Movie Church 3 steeples.

Posted by churchandstates at 7:50 AM