June is the month for Movie Church Confessions 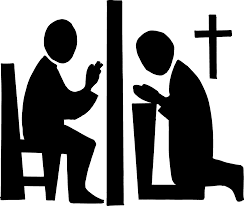 Confession is central to life in every true church, but in Movie Churches the Catholics have a distinct advantage over the Protestants. Confession in a Mainline Protestant or Evangelical Church is chiefly represented by Congregational Responsive Readings or a Moment of Silent Reflection which is unlikely to lead to scintillating cinema.
The Catholic Church, on the other hand, provides a great gift to the movies, the Confessional Booth. The Catholic practice of confession provides opportunities for comedy, tension and pathos. In a farce, there are the comic opportunities provided by the petitioner not being able to see who is on the other side of that little curtain...Instead of a priest, it may be a lover, a chimpanzee or no one at all. In a thriller, it may be a killer on the other side of the curtain. But sometimes the greatest drama is to be found when it is just a priest hearing a confession, and a character can finally reveal what is on his or her heart with honesty.
So all of the churches in June, Movie Church Confessions Month, will be Catholic Churches. Every film will have at least one scene in a confessional booth - played for laughs, tension or pathos. I confess to loving most of these films, except one. I'll save the worst for last.