Christmas in the Mountains 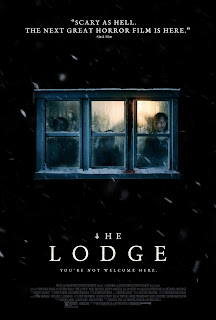 The Lodge (2020)
The Lodge. Sure it’s a Christmas film. Father takes his kids and his bride-to-be up to a snowy cabin to spend Christmas in the mountains. Heartwarming, right?
Well, there are some elements some might consider a little less Yuletidish… Such as a dog that freezes to death (but that kind of thing happens in those Christmas Vacation films). Or the loaded revolver (it is an heirloom, so, family?) And then there's the backstory of a religious suicide cult.
I guess The Lodge isn’t at all like a Hallmark Christmas film, but then neither is Die Hard (which scientific studies have conclusively demonstrated is a Christmas film. You disagree? Science denier).

The Lodge was written and directed by Severin Fiala and Veronika Franz; it premiered at Sundance Film Festival in 2019 and went into theatrical release in February of 2020 -- just before theaters shut down for the pandemic. The most famous person in the cast, Alicia Silverstone (of Clueless fame), plays the wife of Richard Hall (Richard Armitage) and mother of their children, Aiden (Jaeden Martell) and Mia (Lia McHugh). Alicia doesn’t stick around for long, but this is not a Silverstone film because that character, Laura, puts a gun in her mouth and pulls the trigger very early in the film. She was devastated that Richard was divorcing her to marry a much younger woman, Grace (Riley Keough).

It's a horrible thing for those kids, especially at Christmas time. But fortunately for this blog, they have a church funeral for Laura. It seems a bit like a Catholic Church, but it can’t be, because the service isn't a mass, and (usually) Catholic Churches won't hold services for suicides. So is it some kind of Protestant service? The minister (priest?) conducting the ceremony says some odd things.

“Death is a new beginning...Let us pray for her soul as she crosses that she will get to where she needs to go.” That sounds like he might be talking about purgatory, which is a Catholic thing, but then again, she committed suicide.

Then after the indoor portion of the ceremony, Laura's family and friends gather outside and release a plethora of black balloons. 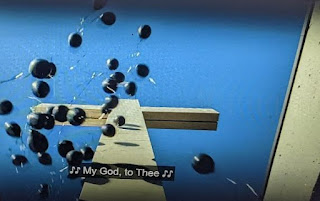 Which was odd. (I'm planning to write out plans for my memorial service in the next month or so. If I die before then, remember that I don't want black balloons. Really, I don't want balloons of any kind at the service.)
That's really the only church we see in the film, except for an excerpt from a service in the church Grace attended as a child. Aiden and Mia search the web to find information about this church and find it was the suicide cult I referred to earlier. A couple dozen of members of the church committed suicide, and the only survivor was twelve-year-old Grace. In that service, we hear the hymn, “Nearer My God to Thee.” 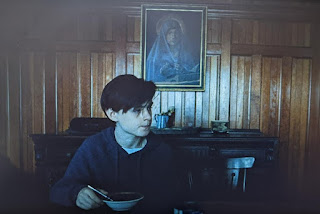 Grace seems to have become understandably adverse to religion and its symbols. When Richard takes Grace to the cabin in the woods, she seems uncomfortable with the cross in their bedroom. And the picture of Mother Mary in the dining room. (Laura seems to have done the decorating.)

Unfortunately, Richard leaves Grace alone with the children at the cabin and goes back to work, planning to return on Christmas Eve. The children are not happy to be with the woman they blame for their mother’s death. Grace tries to make things homey for the kids by decorating for Christmas.

But during the night, all the decorations, along with all of Grace’s belongings, vanish. And the power goes out. And their phones run out of power. And the heating system shuts off. And did I mention that Richard had left them in this cabin deep in the woods without any form of transportation? You know how in “The Christmas Song” when Andy Williams sang about “scary ghost stories?” This film's kind of like that -- if you're looking for that kind of Christmas story. 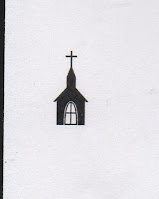 So what's the steeple rating for the churches in the film? That church where the funeral was held wouldn't have done well the ratings, but suicide cults lead to our lowest possible rating of One Steeple.
Posted by churchandstates at 1:54 AM