Dirty Gertie and The Blood of Jesus 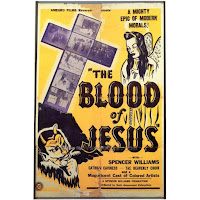 Dirty Gertie from Harlem U.S.A. (1946) and The Blood of Jesus (1941)
Some topic or other is always trending in movie-making. In 1997, there were two volcano films (Volcano and Dante’s Peak). In 1998 there were two giant asteroid films (Armageddon and Deep Impact). Also in 1998, there were two films about talking ants (A Bug’s Life and Antz). The 1940s, for some reason (perhaps because it was a real conflict in the African American community), had quite a number of films about churches at odds with jazz clubs. Last week we looked at two such films, Sunday Sinners (1940) and Go Down Death! (1944). This week we have two more.

In 1991, The Blood of Jesus was the first race film added to the U.S. National Film Registry. It was written and directed by Spencer Williams (who also directed Dirty Gertie, as well as last week’s Go Down Death!) and Williams took a starring role as well. The film opens with a baptism: Martha Ann (Cathryn Caviness) going down to the river singing “Good News” and “Amazing Grace” and marching with fellow congregants. A voice-over talks about a time “when the Ten Commandments was the law of all the countries of the earth....When people prayed on their knees rather than preying on their neighbors.” (I doubt there ever was such a time, but maybe that’s just me). The pastor (the Rev. R. L. Richardson) baptizes Martha Ann.

Martha Ann’s husband, Razz (Williams), is not at the baptism. He claims he was out hunting, but actually, he was poaching a neighbor’s pig. Martha Ann is a new believer and the couple have been married only three months. She encourages her husband, “Why don’t you try to pray and get religion? We would be so much happier if you would.”
“Alright, I’ll try,” Razz tells her.
But before Razz gets to try, he accidentally shoots Martha Ann with his rifle. She isn’t taken to a hospital, no doctor comes to look after her, but the sisters from her church immediately come to her bedside, singing “Sweet Chariot.” A woman from the church tries to assure Razz, saying, “If it’s the Lord’s will for her to stay, she’ll stay, If it’s the Lord’s will for her to go, she’ll go.” This same sister prays for Martha Ann’s healing, “She is a new sister, she hasn’t had a chance to strap on her sword and fight.”

Razz listens in on the prayer as the woman prays, “Make Brother Jackson see the light! Come down and make Martha Ann well again.” Razz prays by her side.

Most of the rest of the film seems to be a dream or a vision. An angel comes down to Martha Ann who seems to leave her body. She is taken to a crossroads where she must choose the pass toward heaven or hell.

The devil sends a man named Judas to tempt her, then he laughs maniacally. Judas takes her to a nightclub where we hear singing and some quite acrobatic dancing. So, nightclubs seem to be a stop on the way to hell.

Martha Ann eventually realizes she must leave the club and goes back to the crossroads -- which we now see is the cross of Jesus. She falls in front of the cross and the blood of Jesus falls upon her.

Back in her bed, we see Martha Ann open her eyes. All the people from her church, are still surrounding her bed, and they all celebrate, somehow now sure Martha Ann is well. Martha and Razz embrace, ready now to live a godly life together. (And one assumes, never will they go to another nightclub or juke joint.)

Our final race film of the month, Dirty Gertie from Harlem, U.S.A., takes the side of the entertainers in the battle between churches and nightclubs. This film is an uncredited take on Somerset Maugham’s short story, “Rain” which had three direct adaptations (in 1928, Sadie Thompson, in 1932, Rain, and in 1953, Miss Sadie Thompson).

Gertie LaRue (Francine Everett) is a big-time New York entertainer who comes to the small tropical island of “Rinidad.” A large crowd awaits her arrival at the Paradise Hotel, and the manager gives her the honeymoon suite. Her cast and crew take up most of the other rooms in the house -- much to the annoyance of missionaries just arrived on the island, the Reverend Jonathan Christian (Alfred Hawkins) and his assistant, Ezra Crumm (David Boykin). On their arrival, they're given inferior rooms.

The preacher was already in a sour mood. “The nerve of that inspector going through our luggage.” He was on the same boat as Gertie, but delays in customs made him later to the hotel. He complains to the manager about their accommodations, “You gave us the worst rooms in the house. If we are going to teach these people about sin, we need to be comfortable. That woman [Gertie] is a painted-up trollop, a Jezebel. Why do those show folks have all the good rooms?”

Christian tells Ezra he is convinced Gertie will lead the people of the island astray, but he believes he might be able to turn her around if he talks to her alone. The missionary finds his chance when Gertie returns to the hotel late at night (or early in the morning) with a soldier and a sailor (she calls them “Big Boy” and “Tight Pants”). She flirts shamelessly with the men but sends them off and enters the hotel alone.

Christian berates her, “The Lord would be shocked to hear you talk like that! The Lord wants you to give your life to him because the wages of sin is death!”

Gertie will have none of it, “You dirty Psalm singing polecat, you want me like all the rest!” She returns to her room and tells her maid, “I hate that reformer.” But she's told the minister could cause trouble, perhaps sending her back to Harlem.

At breakfast, Ezra tells his boss, “I’m worried about you! You didn’t sleep and you haven’t touched your breakfast.”

“Ezra, I’m going to see the governor and have him send this woman and her cheap trash off the island! They will not perform tonight!” Christian rushes off, and Ezra happily eats Christian's breakfast -- he's finished his own.

He first approaches the manager of the hotel who is putting on Gertie’s show, “I’m giving you a chance to close this show and send all those devil mongers off the island.” The manager assures him the show will go on. Christian goes to see the governor who also refuses to close the show.

Christian tells Ezra of the governor’s decision and Ezra calls him a wicked man. But he asks Christian whether he should perhaps go to the show. "Otherwise, I won’t know an awful, sinful thing it is.” 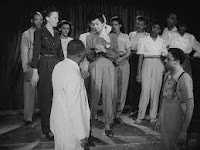 Christian tells him that’s a bad idea. He says, “I must commune with God in secret!” So he goes to his room and prays rather loudly. He asks, “Lord, what should I do with this temptress of men?” He becomes convinced that God is telling him to sneak into Gertie’s show.

So Christian and Ezra both sneak into the show, separately. The show starts with showgirls who are frankly quite modestly dressed in floor-length dresses. A couple of men join them and dance competent softshoe, while the showgirls gesture incompetently behind them.

Gertie then comes out, in an ankle-length dress and a bare midriff. She begins to pull off her gloves which is just too much for Christian. The missionary rushes the stage, comparing himself to Jesus clearing the temple, and slaps Gertie in the face. Mayhem ensues, and the show stops. His mission was accomplished! There's no way for the show to go on that night.
As a matter of fact, the show doesn’t go on at all. After she's returned to her hotel room, Gertie’s lover comes to the island from Harlem and shoots Gertie dead.

So what kind of steeple ratings will these two films get? The congregation of The Blood of Jesus gets Four Steeples for being there for Martha Ann and Razz when they were needed most.

Christian and Ezra, on the other hand, get a measly Two Steeples for being creepy and selfish.


Posted by churchandstates at 8:24 PM