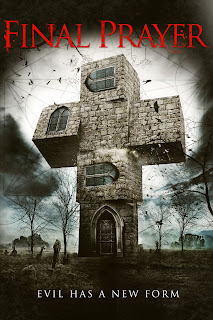 Final Prayer aka The Borderlands (2013)

This last entry in British Film Month falls in the specific, rather limited, genre of “found footage,” films that pretend all the film's footage was amateur video or film discovered after the events that make the story. The Connection, a film about a group of junkies waiting for their dealer (directed by Shirley Clarke in 1961) is thought to be the first such film. The first widely popular found footage film was 1999’s The Blair Witch Project which was made for $60,000 and grossed $140,500,00. Part of its success came through instilling the viewer with the belief that it was a documentary of real events. Many horror films have followed in the Blair Witch tradition, and Final Prayer (with the alternative title of The Borderlands) is one of them.

The film opens in a church that has obviously gone through some kind of disaster, torn apart and thrashed. A man cries out, “They’re all gone!” Those picking through the rubble find video cameras and a satchel with tapes.

Those tapes provide the rest of the film, which tells the story of a group of Vatican investigators sent to research an alleged miracle. The team consists of Gray (Robin Hill), a videographer who isn’t even a believer; Mark (Adian McArdle), a stuffy Vatican official; and Deacon (Gordon Kennedy), a veteran of miracle investigations with a dark secret.

Gray insists the team wear mini cameras and microphones, and Deacon is not thrilled with the idea. He might not want the camera capturing and reporting to the Vatican the large stash of booze he brought to their lodgings.

When Deacon and Gray go into town, Gray is quite condescending to the locals. Deacon asks a man, “Can you tell us where the church is?”
When the man doesn’t answer quickly, Gray says, “You know, the building with the spire on top? God’s house?”

Once they find the church, they hear a rather bizarre sermon from the local priest, Father Crellick (Luke Neal). “In the year 700, a monk encountered the actual presence of Jesus Christ. The bread and wine were transformed into actual flesh and blood.”

Crellick, in standard priest’s garb, is surprised by Gray and Deacon’s casual dress, saying, “I thought I’d be underdressed.”
Deacon responds rather self-righteously, “We are dressed in humility because God opposes the proud but gives grace to the humble.”

The priest shows the investigators where “it” happened. He then shows them a video of a christening he performed, in which his nose begins to bleed, then the cup and bread on the altar begin to shake and fly off the table to the ground. It is rather baffling to see why anyone would consider this odd event a miracle of God, but the team is there to investigate.

Gray asks Deacon, “What happens if we find something?”
Deacon answers, “We report it and move on. Very few things are reported as miracles.”
“You’re saying that was fake?” Gray asks. Deacon says, “Yes.”

Gray brings up Deacon’s past investigations, “That girl in Brighton, with the stigmata, you can’t fake that…”
Deacon answers, “Fake, and not a very good one. Her mother cut her hands and feet every day for ten weeks. The girl got septicemia and died. And the mother said, ‘Now you can make my daughter a saint.’”

Mark proposes the theory that the objects that moved in the church were disturbed by vibrations of a speaker planted under the table or somewhere else in the church. The team begins to search the building for evidence of fakery.

During their search, Deacon comes across Dr. Pritchard Mandeville's journal. The priest wrote in the 1800s that the Lord appeared to him and told him to open an orphanage. As Deacon reads through the journal, he becomes convinced that Mandeville went mad. He wrote about an ancient god from the pre-Christian era who lived under the church. There are indications in the journal that Mandeville sacrificed children from the orphanage to that god. Mandeville’s final journal entry diary reads, “I beseech you, readers, leave this place. He who lives beneath has a hunger for more. I understand the orphanage now.”

The investigative team begins to hear odd sounds: the cries of children and sinister laughter. The people of the village begin to turn on the team and have whispered conversations about this other god.

Gray asks Deacon, “Do you feel a presence in the church?”

Deacon answers, “Well, it is a church.”

Father Crellick is upset that the team seems to be working against him, “You don’t believe in my miracle, do you? I prayed for you to come, but if this is not a miracle, if this is not the hand of God…” And just then a large crucifix in the church falls from a wall to the floor, and the image of Christ smashes to pieces.

Father Crellick does not deal with these incidents well, but climbs to the roof of the church, diving off, and committing suicide. Deacon gives the last rights to Crellick, though he says, “The souls of those in a state of mortal sin descend into hell.”

The team comes to believe that the supernatural is at work in the church, but not necessarily the work of God. They call in Father Calvino (Patrick Godfrey), an expert on exorcism, to do his stuff. Not surprisingly, considering the shape of the church as we saw it at the beginning of the film, all hell breaks loose and everything takes a dark turn for the team from the Vatican.

Considering that at least two priests in the film turn to work for the forces of evil rather than for God and that the other priests are absolutely impotent in opposing evil, I’m giving this Hellmouth of a church (and these incompetent priests) our lowest Movie Church rating of one steeple out of four.
Posted by churchandstates at 7:10 PM