Brit Month: "The Most Exciting Motion Picture Ever Made!" 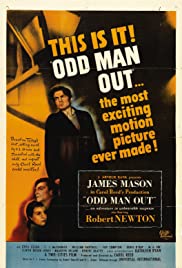 A poster for this film claims it's “The Most Exciting Motion Picture Ever Made!” Admittedly, this was 1947 -- Steven Speilberg was barely a year old and hadn’t gotten around to directing Jaws or Raiders of the Lost Ark, but Hitchcock had done some pretty effective thrillers, Universal had their monsters, and Fritz Lang directed some pretty suspenseful films in Germany and America.

But even if Odd Man Out isn’t all that poster said, it’s still a pretty great film. It was the first film to win the BAFTA Award (the Brit’s Oscar equivalent) for Best British Film. Director Roman Polanski (yes, I know the man has “issues”) often called this his favorite film. But most important for this blog, Odd Man Out has a pretty great priest.

Written by R. C. Sherriff (The Invisible Man) and directed by Carol Reed (The Third Man), Odd Man Out tells the story of Johnny McQueen (James Mason), an Irish revolutionary who has been hiding from the government. He agrees to lead a heist to get money for his organization, the operation goes south, he's shot, and he kills a guard. McQueen has to go on the run alone, forced to depend on strangers and questionable allies along the way.

Many people are looking for McQueen: other Irish nationalists; the police; people wanting to collect the reward on McQueen’s head; and Kathleen (Kathleen Ryan), a woman who loves him. All of them go to Father Tom (W. G. Fay) for help locating him.

A man named Shell (F. J. McCormick) sees McQueen being dumped by a hansom cab. He goes to Father Tom for help in apprehending McQueen and turning him in for a reward.
The priest tells him, “You foolish man, money won’t make you happy. A thousand pounds would be a terrible burden.”

Shell protests, “I’m a poor man, I’ve got no money.”
The Father answers, “I’ll inspire you with faith.”
Shell objects, “Will faith pay the rent and provide stout?”
Father Tom tells him, "Faith will give you real riches.” And Shell believes him.

Kathleen also goes to persuade Father Tom to tell her if he sees McQueen. She wants to help McQueen escape, but Father Tom won’t go along with that. He says, “I’ll hear his confession and provide him some peace. I’ll encourage him to give himself in, so he doesn’t hurt anyone else… You couldn’t hide him for long. He killed a man and must pay the penalty.” Father Tom worries for McQueen, “When people are in deep troubles they talk to me about killing themselves. But God gives them the courage to win. This trial is nothing but a trial for the life to come.”
Kathleen is unpersuaded by the priest, “You’re wise father, and good, I know. But my faith is in love."

And when the police ask whether Father Tom knows McQueen and his compatriots he tells them, “I know them all. I taught them as children.” Father Tom says, “I’ve seen the bad in them and I’ve condemned that. But what should we do with the good in them?”

As Father Tom works to bring McQueen in, the injured and delirious fugitive sees Father Tom, his priest from childhood, in a vision. In his vision, he can see but not hear the priest, and McQueen calls out, “Tell me, Father, like you used to tell us. Louder, Father! Speak louder! We’ve always drowned your voice with our shouting, haven’t we, Father? We never really listened to you. We repeated the words without thinking about what they meant. But I remember when I was a boy, ‘When I was a child, I spoke as a child. But when I became a man, I put away childish things. If I have not charity, I am nothing.’”

I can tell you, almost every pastor or priest would be moved to know their words were remembered by those that seemed to be their most hardened parishioners in their final days. And Father Tom is there for McQueen until the end. Therefore we are giving Father Tom our highest movie church rating of Four Steeples.
Posted by churchandstates at 6:43 PM