Comedy Month: Death(s) at a Funeral 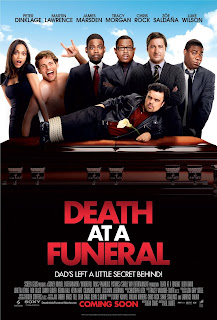 This remake of 2007’s Death at a Funeral is a little baffling. It's common for hit European or Asian films to be remade into American films (The Birdcage was originally the French comedy La Cage aux Folles, The Departed was a remake of Hong Kong’s Infernal Affairs, Scent of a Woman was Italy’s Profumo di Donna, etc.) But usually, these are foreign-language films remade into English because many American audiences don’t care for dubbing or subtitles. The first Death at a Funeral is an English language film, made in England. I guess it was remade for those who find English accents too challenging.

As one might guess from the title, both films are black comedies. (Some might be tempted to go for the crude joke that the American version is even blacker with the African American cast, but we at Movie Churches are above such things.) Both tell the story of a family coming together for the funeral of a beloved patriarch. Both films’ screenplays are by the same writer, Dean Craig, with little change in the plot, some in the dialogue. Each has a different director (Frank Oz for the British version, Neil LaBute for the American.)

In this version, Chris Rock plays the elder son, Aaron, who is responsible for arranging the funeral and giving the eulogy (this was Matthew Macfadyen’s role in the original). Aaron's wife, Michelle (Regina Hall) seems more concerned about procreation than death. In addition to this distraction, everyone's attention is focused on Aaron’s younger brother, Ryan (Martin Lawrence), a best-selling novelist who's flying (first-class) into town for the service. 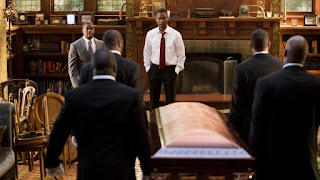 A host of problems evolve on the day of the funeral. The mortician (Kevin Hart) initially brings the wrong body in the correct coffin (Aaron complains, “This isn’t Burger King! You can’t mess up my order!”). A guest accidentally takes a hallucinogen and knocks over the casket during the service and strips naked. The worst complication is an uninvited, unknown guest who blackmails the sons to pay him a large sum, or he will reveal he is their father's gay lover (Peter Dinklage, in the same role he played in the earlier film).

But, of course, none of these things are of our concern here at Movie Churches. We just want to know about the pastor who conducts the service, the Reverend Davis (played by Keith Davis. You might know Davis from his role in one of the greatest, longest fistfights ever, in the film They Live.)

The Rev. Davis seems to meet Aaron on the day of the funeral. He doesn’t seem very familiar with Aaron’s father. He doesn’t seem very interested in learning about Aaron’s father. I’ve done a number of memorial services, and learning as much as I can about the person being remembered is a very early priority for me. My motivation in leading a memorial service is first to bring to hurting people the comfort God can bring, and second is to honor a human life that is no more.

But the Reverend has a very different primary motivation. He wants to meet Aaron’s famed brother, Ryan, “The writer! I squeezed this job in today because I really wanted to meet you. Listen, I just finished reading Momma’s Secret. That will be our little secret, because I’m not supposed to be reading this kind of stuff.” He fit this service in between two christenings and another funeral. Which makes me wonder how much care he is giving to each family.

And what’s the deal about him talking about reading things he isn’t “supposed” to be reading? Is it smut? Or is it literature with adult elements? He has an uncomfortable “wink, wink, nudge, nudge” attitude about the whole thing.

When it's time for the service, he begins by saying, “We are here to mourn the passing of a fine man,” though, again, he seems to know nothing about the man he calls “fine.” He goes on to read from Ecclesiastes and then tells the story of David and Jonathan ( “Then Jonathan and David made a covenant because he loved him as his own soul. Then Jonathan stripped himself of the robe that was upon him and gave it to David and his garments, even to his sword, and his bow and his girdle.”) This seems to be a rather obscure Scripture to cite, especially, again, since he knows next to nothing about the deceased. I really think he would be better off going with the traditional route of Psalm 23 or John 11.

Reverend Davis invites Aaron to deliver the eulogy. During the eulogy, Aaron's cousin's fiance' has a hallucinogenic episode and knocks over the casket. The body falls out, and (naturally) chaos ensues. In the midst of the furor, the pastor stands to one side, forcing Aaron to restore order. Surely, this should have been the Reverend Davis’ job. A decision is made to have a “break” in the service, and everyone is expected to hang around until the service starts again. (This is a lot to expect of people.)
During the funeral intermission, the father’s former lover goes about blackmailing the sons and through some wacky escapades, appears to be dead. To help conceal the apparent death, another cousin, Norman (Tracy Morgan), must distract Reverend Davis.

Norman asks the Reverend, “I’ve been meaning to ask you, at what age did you decide to get your church on?”

Reverend Davis responds, “I need to make a phone call.” (This is an emergency phone call -- there's a naked man on the roof -- but wouldn’t someone have a cell phone back then? I believe they were rather common a decade ago and I would expect a busy clergyman to have one.)

So Norman tries again with, “But I need to make a confession!”

“I’m not a priest,” the Reverend answers. 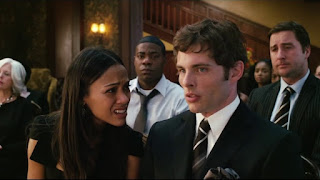 “That’s okay,” Norman says, “Because I’m not a Catholic. It’s just that, I know I’ve been touched in some religious fashion… I’m addicted to strip clubs. The smell, the pole, the stretch marks, the C-section scars. I didn’t know nothing about whip cream. Nothing, ‘cause I’m diabetic, so if I eat whip cream in the wrong place, I’m gonna break out.”

Throughout this confession (in which Morgan seems to be channeling his 30 Rock character, Tracy Morgan), the Reverend very visibly appears revolted. Granted, Catholic priests generally have the advantage of a divider in a confessional booth. They might not have to monitor their facial expressions. But someone in the clergy really should get used to people sharing intimate aspects of their lives and -- pro tip! It's best to master the habit of not looking disgusted when they do so.

Eventually, after Norman goes on about angels appearing him in a vision as strippers, the Reverend agrees to pray with him, then goes outside to observe the naked man on the roof with the rest of the funeral crowd. He doesn’t offer his counseling expertise in this situation.

Once the man is safely brought back inside, the Reverend wants to get the service going again, saying, “We’ve got to get this damn thing started. Look, we’ve got to zip through this thing now, son. I mean, I’ve already missed another funeral and two christenings.”

So the Reverend Davis receives a mournful Movie Churches rating of Two Steeples out of Four.
Posted by churchandstates at 9:09 PM