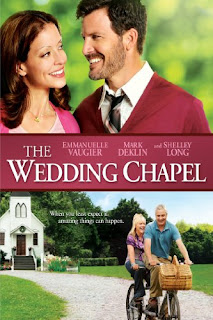 We really don’t need to spend time on the central plot of The Wedding Chapel. If you’ve seen any Hallmark Movie, you know the plot beats. A beautiful single career woman from the big city, Sarah Robertson (Emmanuelle Vaugier), must (because of reasons) go to a small town, where she meets (cute!) a handsome bachelor, Roger Waters (played by Mark Deklin, not the frontman for Pink Floyd).

Sarah has a wacky, widowed mother, Jeannie (Shelley Long) who has flashbacks about her first love who went to Vietnam. Jeannie thought he was dead, but actually, he was a prisoner of war. Jeannie got married but found out her first love was alive -- but it was too late. You will be shocked to learn there are two romances in the film.

Sarah returns to the small town because she hears that her dead grandmother’s house is going to be torn down by contractors who are going to build a new mall. Since Sarah moved a lot during her childhood, her grandmother’s house was her one stable place. When she and her mother visit, they find that the house is still fully furnished with family photos on the wall. Nothing has been done to clean it out even though the demolition crews are just weeks away.

As the women walk through the neighborhood, they see a church. “Oh, look at that chapel,” Sarah says.

Jeannie says, “They’ll probably bulldoze that too. I hope they find a way to save it. The whole neighborhood grew up in there.”

Sarah begins to think she can save her grandmother’s house by saving the chapel. With her mother, she go to see Mark, the city planner who also is a lawyer.

They ask him about the destruction of the church to build a shopping mall. He tells them the process is too far along and can’t be stopped. When Jeannie asks if Pastor Reed did anything to stop the sale, Mark tells them, “He did, but the congregation wanted a better, more modern facility elsewhere.”

Jeannie is outraged, “This is criminal. The chapel has been here for centuries. It’s unbelievable. The wood was cut right from the local trees. The foundation was built by the same Scottish mason who built the first church in Savannah.”

“How do you know all this?” Sarah asks.

Jeannie tells how it used to be. “So on Sundays, just about everyone gathered here. And it didn’t matter if you went to the service. Anything that was anything, started here.” We get a flashback of a picnic in front of the church with people barbequing burgers, kids blowing bubbles, teens hula hooping, and young Jeannie falling in love. Which is all swell, but I do wonder, what happened in those Sunday services? We never learn throughout the film. 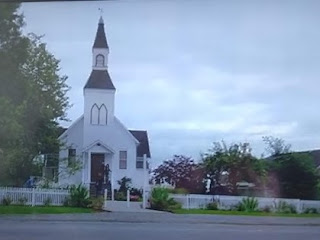 We soon meet the church’s current pastor. Sarah is sketching the church when a man comes along. He calls out, “Sarah, don’t you recognize me?” He reminds her that she sketched him long ago.

She’s right. He says, “Or as the congregation refers to me, Pastor Reed, the sequel in 3-D.”

“Following in your father’s footsteps?” she asks.

He looks at her sketches and says, “You’re a great talent.”

“I wish the critics thought so,” she pouts.

“Well, we must listen to our hearts,” he tells her. Not very theologically sound, but probably the deepest thing the Reverend says in the entire film.

Sarah asks Pastor Reed whether he tried to save the chapel. “Nobody loves the chapel more than I do,” he responds, “Except Dad and maybe (the Reverend points upward). Everyone else grew up around the chapel, but I grew up in it.”

“So you were the only one who stood up to them?”
“The building's in bad shape and the Board thought it made more sense to take the money and build another facility elsewhere. Everyone got what they wanted.”

Pastor Reed agrees to take Sarah to the church. The front door is bound in chains, which the Pastor unlocks. “Nobody’s been here for a couple of months. Excuse the mess,” he says. Because the church isn’t messy at all inside.

Sarah exclaims, “I forgot how beautiful this is.”

The pastor says, “I especially loved the afternoon weddings.”

Now this all greatly confused me. Why, if the church was going to shortly be demolished, hadn’t anyone cleared out the inside? And where has the congregation been meeting for the last two months with the chapel locked up? Why wouldn’t they be meeting there while it was still there and they didn’t have a new building?

Anyway, Sarah asks to see the chapel archives. When the pastor asks why, she responds, “History!” Sarah thinks if she can find significant history in the church archive, the church might be saved. (Again, why were these records left in the church that is shortly scheduled to be destroyed?) She does find records that indicate the church is the site of an Indian burial ground, but that isn’t enough.

Eventually, the people who love the place are called to a meeting in the church where they're asked to help dig through the archives. Pastor Reed and Sarah stand in the front of the crowd in the pews. The pastor turns the meeting over to Sarah.

Why isn’t Pastor Reed conducting the meeting to save the church? Why does he let a stranger lead the meeting?

Maybe because the pastor knows that his congregation doesn't want to stay in this old building. The church board wanted to sell, and the pastor is going against the wishes of the church leadership. That is why he is trying to palm the responsibility of sabotaging the sale off on someone else.

Anyway, Sarah tells the people, “I came to this town to save my grandmother’s house. But I started to realize the center of town for my mother and all in this town is the chapel. We are a community. Like a tree with the chapel as our roots. I wasn’t just trying to save the tree, but the roots. The memories in those photos, that’s what we’d really be losing… Some things are worth fighting for.” It does seem like they are fighting for the memories of the church -- it isn’t’ doing anything much in the present.

She gets through to them, though, and many people get to work looking through the archives for something of historical relevance. As people dig through cardboard boxes, Pastor Reed shouts, “We are offering a free wedding ceremony to anyone who finds something useful. Of course, every ceremony here is free.”
Sarah is (naturally) the one who finds something important (so did she really need the help?) She finds a copy of the treaty ending the French and Indian War -- signed on the site of the chapel. (No historian had ever figured this out.)

So the chapel building is saved. And the congregation must take on the ongoing financial burden of keeping up a dilapidated old building, against the wishes of the church leadership. And untold numbers of construction workers won’t get to work on the new construction project, plus all the people who will lose out on the jobs the new mall would have offered.

We do get to see a wedding in the chapel. Jeannie and Larry get married there. Long ago at the chapel, they had recited vows together when they were all alone. So as the pastor begins the traditional service with “Dearly beloved,” they just start kissing. So the pastor says, “You may kiss the bride.” And everyone laughs. It's probably fine, because I doubt Pastor Reed really had anything worth hearing anyway.

That’s why we are giving the Reverend Reed and his wedding chapel a meager 2 out of 4 Steeples.
Posted by churchandstates at 9:01 PM