Comedy Month: We are Brothers 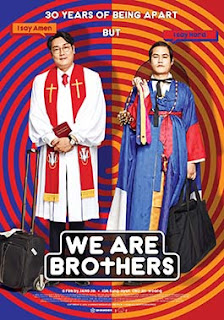 
Countless times in this blog (okay, I probably could count it with the search functions but I prefer not to) I’ve written (in fact, you can see it above), “We’re not reviewing movies, not reviewing churches, but reviewing the churches and clergy in movies.” But it’s my blog, and I can break these rules whenever I want.

So I’m going to recommend this film, We Are Brothers, talk about it some, but leave out a lot of things about the featured clergy in the film because I want people to enjoy the film’s twists and turns. Usually, we put clerical criticism before the enjoyment of a film’s plot, but not this week. But I will give you the basics of the beginning of the story.

Two young Korean boys lived with their parents in a small fishing town. After their father dies, the responsibility of raising the boys by herself is too much for their mother, so she abandons them in an orphanage. At the orphanage, one of the brothers, Park Sang-yeon (Cho Jin-woong), is adopted by an American family. Officials at the orphanage tell Sang his brother will be coming to America as well. 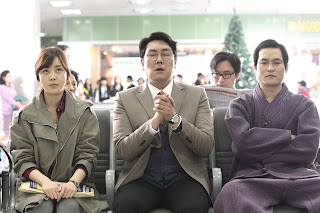 It's a lie. His brother, Park Ha-yeon (Kim Sung-kyun), remains in Korea. Decades later, Ha finds his mother, a victim of Alzheimer’s, and cares for her. That's when the producer of a Korean reality TV show comes up with the idea of bringing the brothers together -- the brothers who haven’t been in contact since that fateful day at the orphanage when they parted.

When they meet, they discover they’ve taken divergent paths in life. Ha became a Shaman. Sang became a pastor. Both are rather disgusted by their sibling’s lifestyle choices. They seem anxious to part until their mother disappears, and they must search for her together.

That’s enough. Dear readers, you would make me very happy if you find this film on Amazon Prime and watch it. Sure, it’s in Korean, so most of you will need to use the English language subtitles, but it is very funny and very touching. If this post gets even a couple of you to seek out this film, breaking the blog rules is totally worthwhile.

I’m still going to give brother Pastor Sang our highest Movie Churches rating of Four Steeples for how he treats criminals and orphans. (I questioned his abilities and ministry for a time, but it all made sense at the end.) So check it out.

Posted by churchandstates at 12:48 AM