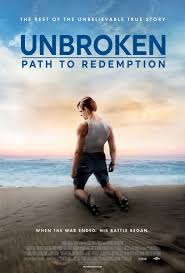 Unbroken: Path to Redemption (2018)
Unbroken: Path to Redemption had an interesting path to become a sequel. In Hollywood, a sequel is usually made because of money. If the original makes a whole lot of money, the studio says do it again, especially if it features a superhero or action hero, but 2014’s Unbroken was a biographical film about World War II hero Louie Zamperini based on the bestselling book by Lauren Hillenbrand.

The 2014 film, directed by Angelina Jolie from a screenplay written by Joel and Ethan Coen, told the story of Zamperini, an Olympic runner who was captured by the Japanese during World War II. He served in a prisoner of war camp and was tortured by a sadistic guard known as The Bird. He survived and was released from the camp at the end of the war, “unbroken.”

If you’ve read the book, you know that isn’t true. Zamperini was a very broken man. That's where the film ends though, at the end of the war.

The first film was made with a 65 million dollar budget and grossed about a hundred million more. Certainly, that's a respectable profit, but usually, that wouldn’t be enough to lead to a sequel. 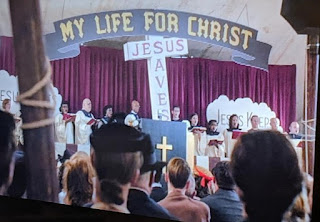 The sequel was made was because the first film left out what many would consider the most important part of Zamperini’s story: his coming to faith in Jesus. Universal was a producer of both films, but the original was released by Legendary Studios while the sequel was released by Pure Flix. Pretty much an entirely different cast and crew were brought in for the sequel. Harold Cronk directed a screenplay by Richard Fiedenburg and Ken Hixson. Jack O’Connell played Zamperini in the first film, Samuel Hunt played him in the second film. About the only name the two films have in common is Laura Hillenbrand.

Path to Redemption opens with Zamperini visiting Tokyo in 1950. Someone tries to give him directions and he remarks that this is “not my first time in Tokyo.” It's where he served as a prisoner of war. We go back in time to the end of WWII and Zamperini’s release from captivity.

We see him being welcomed joyfully home, where his parents had been told by the government he was dead. The local priest is asked to join the homecoming. Louie greets him as “Padre.” The priest tells him, “All of Torrance was praying for you. God’s not to blame for your suffering.”

Louie doesn’t seem to be buying it. Later in the film, he admits he felt that not only was God to blame for his suffering, God was his enemy. 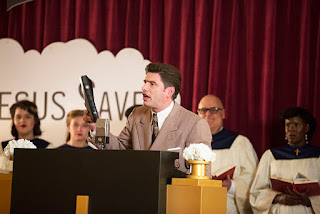 The Army recruits Zamperini to go on tour to sell war bonds. Initially, this goes well, as he tells about encouraging other POWs with stories about his mother’s fine cooking. But as the tour goes on, Lou begins to drink more and more heavily, sometimes before speeches. His C.O. demands he take a break from the tour, going for several weeks of R. & R. in Florida. At the beach, he meets the woman who soon became his wife, Cynthia Applewhite (Merritt Patterson).

Cynthia asks Louie whether he prayed during his wartime experiences. “Begging (was) more like it,” he answers. She asks him about his faith and he answers, “I didn’t pay much attention in Mass.” But after they visit the church she grew up in, he agrees to a church wedding. The couple then returns to Louie’s hometown of Torrance to live.

Though they get by for some time on funds the government provided for back pay and insurance for Louie’s time in the camp, funds soon get tight. Louie can’t find work. Or at least, he can’t find a job he thinks is befitting his history as an Olympian and a war hero. So again he drinks. Heavily. Days he claims to be looking for work he’s actually spending in bars.

He also has night terrors, making him fear that he’ll harm Cynthia. He goes to see a government-provided psychiatrist, Dr. George Bailey (played by Gary Cole rather than Jimmy Stewart.) Though the doctor doesn’t use the term “PTSD,” it’s clear that's the problem. And Louie is trying to address it through alcohol.

Cynthia has a child, but that doesn’t make the marriage better. Cynthia begins to consider divorce, but a neighbor, Lili (Vanessa Bell Calloway), encourages Cynthia to “fight for him.” Lila also takes Cynthia to a revival meeting -- the Greater Los Angeles Revival -- Billy Graham Every Night, 7 PM -- which, in 1949, was scheduled to run for three weeks but continued for eight.

Louie tells Cynthia he won’t consider going with her. He describes the revivals of his youth as frauds,  saying, “Hide your wallet, the circus is in town.” While she goes to the revival, Louie drinks at home from a bottle in a hollowed-out Bible.

Eventually, Louie does go to the revival, drinking from a flask on the way. A tent on the fairgrounds is decorated with a large cross with a sign on it “Jesus Saves.” A choir sings “Onward Christian Soldiers.”

Billy Graham (played by the evangelist's grandson, Will Graham) is at the pulpit. At the beginning of his message, he jokes at the beginning of his message, “I will keep the message brief, but I always say that, so don’t get your hopes up.” He goes on to say, “God has a lifeline. I do not believe that any man can solve the problems of life without Jesus Christ. Have you trusted Christ Jesus as savior? Tonight, I’m glad to tell you that the Lord Jesus can be received, your sins forgiven, your burdens lifted, your problems solved, by turning your life over to Him and repenting of your sin and turning to Jesus Christ as savior.” 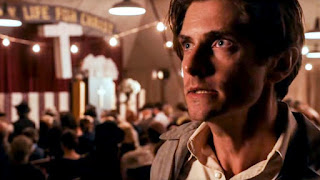 Louie goes again. Billy preaches, “Why doesn’t God stop suffering? I can see the stars and I can see the footprints of God. What God asks of man is faith. I believe God is still transforming lives.” Lou starts to leave, but Billy says “Don’t leave, you can leave while I’m preaching, but not now. This is it, God has spoken to you. It is time. Come forward.”

Louie flashes back and remembers the time his plane went down and he was stranded on a raft at sea. He begged God, “If you save me, I will serve you all my life.” He was saved. By Japanese who imprisoned him, but he was saved.

At the crusade, years later, he kept that promise. When he trusted in Christ, God changed his life around.

A final title card reads: “Nearly forty years after WWII, more than 85% of former Pacific POW’s suffered from post-traumatic stress disorder. Every man had to find his own path; Louis Zamperini found profound peace. After his conversion, Louis never drank again. He began a new life as a Christian speaker, telling his story all over America, from grade school classrooms to stadiums. In 1952, Louis established Victory Boys Camp to help at-risk youth, which the Zamperini family continues today. Matsuhiro Watanabe “The Bird” was one of the most wanted WWII criminals in Japan. He remained in hiding for several years until he was granted amnesty by the U. S. in its efforts to reconcile with Japan. Louis and Cynthia were married for 54 years.”

Zamperini was a great man. As was Graham, the clergy member in this film. He earns our highest Movie Churches rating of Four Steeples.

Posted by churchandstates at 10:11 PM