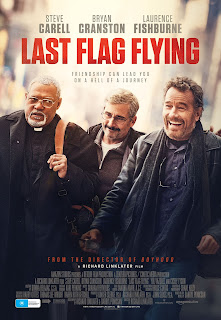 On Veteran’s Day, we in the United States honor those who have served this country in the military. Here at Movie Churches, one day just wasn't enough, so we've taken the entire month of November to look at films that feature either veterans of wars or soldiers in war. We're finishing the month this week with 2017’s Last Flag Flying.

It's directed by five-time Oscar nominee Richard Linklater, who also wrote the screenplay (based on the novel of the same name by Darryl Ponicscan). When the film came out, it was thought to be a sequel to the classic 1973 film, The Last Detail, but it isn’t exactly that. Ponsicscan’s novel is a sequel, but the film introduces a new cast of players instead of the characters portrayed by Jack Nicholson, Otis Young, and Randy Quaid.

This film is set in December of 2003, with a Vietnam vet, Larry "Doc" Shepherd (Steve Carell), seeking out two of his war buddies to help him bury his son, who was killed in the Iraq War. He first finds his friend, Sal (Bryan Cranston), a tired-looking bartender, and together the two go find another friend, Richard Mueller.

They arrive at the Beacon Hill Baptist Church. The sign in front of the church reads, “Come to me all you who are burdened and heavy laden, and I will give you rest - Jesus.”

Sal isn’t sure about going inside the church, commenting, “If you’ve seen one, you’ve seen them all.”

But Doc says, “You’re going to love this, I promise.”

The Reverend Richard Mueller (Laurence Fishburne) is preaching, A banner up front reads “Holy Unto the Lord,” and there is a Christmas tree (helping this post make a nice transition from November's Veteran Month to December's Christmas Month here at Movie Churches). “See, as Christians, brothers and sisters, we have choices. We can lay down our will and follow God’s will.” Doc and Sal sit in the back of the sanctuary, behind an enthusiastic African American congregation. Rev. Mueller sees them and is obviously disconcerted. 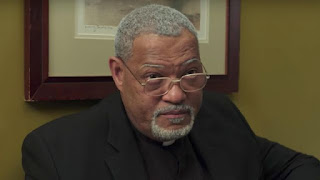 After church, Richard invites Doc and Sal to his house for Sunday dinner and introduces them to his wife, Ruth (Deanna Reed-Foster). “You married up,” Sal says.

Doc asks Richard to join them in the mission to bury his son. Richard is hesitant. He talks privately with his wife. “I try to be a decent man. I regret any role I played in all that foolishness back in Vietnam. I grew up. I found my way.” He is afraid of backsliding if he joins his old friends.

His wife reprimands him for even thinking of not helping his old friends, “Are you demonstrating Christ-like behavior? You can’t refuse anyone, you’re a preacher.”

So the Reverend tells Doc, “Whatever it is that’s troubling you, it is best to talk about it.”

Doc tells him his wife died a couple of years before, and “Larry Jr. joined the Corps a year ago. Two days ago they told me he was killed. He’s coming home tonight. He will be buried in Arlington, and I was wondering if you guys could come with me.”

Richard responds with a somewhat canned response, “I can promise you, you will see your wife and son again in a better place.”

Which brings Sal to say, “What better place? Can you find it on the internet? How come none of those floating in heaven got word back to me?”

Still, the three old friends get on the road. Sal’s mad driving leads Richard to swear from the back seat, which delights Sal, “I thought you were lost forever, I really did.”

When they arrive at Arlington, they learn that though Doc’s son is to be buried with honor, it is under false pretenses. The official position is that he died in battle, but actually, he was killed accidentally by friendly fire.
Doc decides he doesn’t want his son to be buried at Arlington. He wants him buried back in his hometown next to his mother. He asks for the body, but is told, “ I can not release the body to anyone but a licensed mortician.”

Richard steps forward, “Or a clergyman, right?” And yes, they're told, the body can be released to a clergyman. They rent a U-haul to take the body back home.

Sal and Richard continue to dig at each other as they travel. Sal says, “You used to be fun.”

The Reverend responds, “I still am, when it’s right in God’s eyes.”

During their trip, the trio decide they need to make a side trip. They talk about their part in a man's grisly death when they used the morphine he needed for themselves. They decide to go to his mother's home, but when they get there, they decide that instead of confessing the truth, they should tell her that her son died a noble death. They decide her need for a happy resolution is more significant than their need for confession.

When they arrive in Doc's hometown, Sal and Richard put on their dress blues to honor Doc’s son at the funeral.

Burying the dead and comforting families is one of the most essential duties for clergy. Sadly, it takes some pressure to make Richard perform this duty, but he does, so we’ll give him a Movie Churches rating of Three out of Four Steeples.
Posted by churchandstates at 12:10 AM