Veteran's Month: The Eagle Has Landed 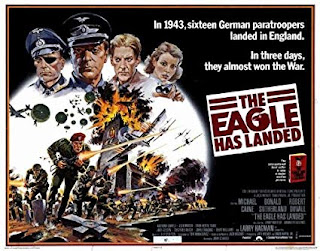 The Eagle Has Landed (1976)
A challenge thoughtful church leadership often faces is what, if any, place patriotism should play in the life of a church. Here in the U.S. of A, when Veteran's Day or the Fourth of July rolls around, the question arises whether these holidays should be acknowledged. Some churches add patriotic hymns to the order of worship at such times, with “God Bless America” and “America the Beautiful” joining the program with “Holy, Holy, Holy”.

But some churches express concern that the inclusion of such patriotic, explicitly American songs, along with, perhaps saying the Pledge of Allegiance to the Flag, may well be a form of idolatry, using the time and place set aside for worshiping God to worship a country. Such a church might use more ambiguous “patriotic songs” such as “Faith of Our Fathers” or “Battle Hymn of the Republic.”

There are also churches that avoid even a whiff of patriotism.

I think there are good arguments on both sides of the patriotic debate. C.S. Lewis argued that when Jesus cried over Jerusalem He was exhibiting a kind of patriotism, but Lewis strongly argued that while there can be good in patriotism, it can distract us from giving God the honor due Him.

Ultimately, I think the priest in 1976’s World War II adventure The Eagle Has Landed fails to balance faith and patriotism properly.

The film was directed by John Sturges (The Great Escape) and the plot is preposterous. During the war, Nazis want to send paratroopers to kidnap (or assassinate) Winston Churchill. Colonel Radl (Robert Duvall with an eye patch) recruits Oberst Kurt Steiner (Michael Caine) to lead the mission, with the assistance of an IRA spy, Liam Devlin (Donald Sutherland). Through a bit of “synchronicity,” the Germans learn that the Prime Minister will be visiting the English seaside village of Studley Constable.

One of the few people in the village who's aware of Churchill’s impending visit is the local priest, Father Verecker (John Standing). Though Studley Constable is an English village, the only church is Catholic, not Anglican.

The spy Devlin comes to visit the church; he bows to the altar, as does the priest.

The priest greets him and says, “We have a small but faithful congregation here, Mr. Devlin. I look forward to your adding to it. You are Catholic?” 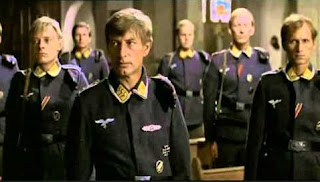 “Did you come for confession?” the priest asks.

“Father, I’m afraid this poor soul is well past redemption,” pleads the spy.

“I could do with a spicy revelation every now and then,” the priest responds. “And don’t forget the words of our Lord, ‘The last shall be the first.’”

“In that case, Father,” Devlin answers, “Then I’m assured a place at the head of the line.”

The next time the priest sees Devlin, the Irishman is in the midst of a fistfight. The priest doesn’t intervene. Devlin yells to the priest, “It’s alright Father, I’m just explaining the Holy Trinity.” The priest just smiles.

The priest unknowingly encounters another member of the plot against Churchill. He hears someone playing the organ in the church. He finds one of the “Polish” paratroopers playing. He is impressed with the soldier’s skill, “Bach needs to be played well. That is my frustration every time I take that seat.”

“Col. Miller” (Steiner/Caine) asks the priest if troops can do exercises throughout the village. Apparently, the priest has the authority to make these calls, which seems odd.

While doing those exercises, a little girl falls into a stream leading to a mill wheel. One of the "Polish" soldiers dives in to rescue the child. The soldier dies in the rescue, and when he is pulled out, it is revealed he is a German. The priest is outraged, “My God, you’re a German. Colonel. I know what you’re doing, and I know what you want. You won’t get away with it.”

The Germans send all the witnesses to be held in the church. Steiner inspects the church and finds a locked door. He asks why the door is locked. The Father replies, “It is the sacristy. It is where I keep the church records, my vestments, and such. The key is at my house. I’ll go and fetch it if you like.” Steiner wouldn’t like.

Father Verecker tries to encourage his fellow hostages, “At times like these, there’s very little left but prayer, and it frequently helps.”

But the priest only sees the worst in Steiner and his soldiers. He never acknowledges the unselfish act of the soldier who gave up his life to save the child. And he never learns that Steiner had risked his own life back in Germany trying to save the life of a Jewish woman he didn’t know, or that his paratroopers backed his actions.

One of the last things we see Father Verecker doing in the film is swinging a chair at Devlin, calling him a bastard. There is something to admire in the priest's determination to serve the people of his village. But he never seems to acknowledge that the Germans, too, are men made in God’s image. Therefore, Father Verecker loses a steeple in our ratings, earning Three Steeples.
Posted by churchandstates at 8:06 AM