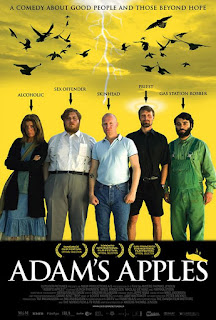 Adam’s Apples (2005)
I know the Movie Churches readership: a number of you have been asking, “Why doesn’t Dean review more Danish films?”

I understand your frustration, but you need to realize other readers are asking, “What’s the deal with all the Danish films? We want more reviews of Hollywood products.”

Well, I have good news for that first group, and the second group can rest assured that we’ll be back to films from the good old U. S. of A. soon enough (most likely next week).


Adam’s Apples is a 2005 black comedy made in Denmark, and it’s a fully Danish language film (except for snatches of “How Deep is Your Love” but by Take That rather than the Bee Gees). It tells the story of a pastor (certainly Protestant, probably Lutheran) who runs a halfway house for released prisoners. As the film opens, the Reverend Ivan Fjeldsted is at a bus stop to greet a newly released prisoner, Adam Pederson, a neo-Nazi. (The actors playing Ivan and Adam may be familiar to American audiences. Mads Mikkelsen, who plays the pastor, was a Bond villain in Casino Royale, the creator of the Death Star in Rogue One, and the title cannibal in the TV series Hannibal. Ulrich Thomsen, playing the released convict, has played bad guys on the TV series Banshee and The Blacklist and the new Starz series, Counterpart.)

Adam soon meets the other residents of the home, which is made up of rooms within a country church. There is Gunnar, an alcoholic, a kleptomaniac, and a rapist. Khalid is a Pakistani who robbed gas stations and remains well armed.

Ivan gives Adam a kind of entrance interview along with a bit of his philosophy. “It says here you’re a Neo-Nazi. It says you’re evil. I don’t think that’s a polite thing to write in someone’s CV (report)... We believe there are no evil people. If you need to look for evil, this is an evil world. But you can try to focus on the silver lining as we do here.”

Ivan tells Adam everyone in the home needs a goal and asks him what his goal would be, mentioning that Gunnar has given up drink and now is pursuing theological training, and Khalid has also turned his life around. Adam jokes that his goal would be to make an apple pie.

The pastor takes him seriously and assures him of help toward his goal. The church has an apple tree on its property, and Pastor Ivan tells Adam the tree’s care will be his responsibility.

Adam attends a worship service (it seems to be required) where Ivan preaches about how we must battle against the devil. Ivan wears an odd starched ruff, like you see in old paintings, over the top of a full clerical collar. When an old man stands up during the sermon and heads for the door, the pastor asks, “What’s wrong? Are you bored by the Word of God?”

The man explains he has to go to the bathroom. So the pastor wraps things up early. (Gunnar says to Adam after the service, “It was a good sermon today, shorter than usual. Don’t worry about Ivan, he’s a good guy.”)

A woman named Sarah comes to Ivan for counseling. She’s terribly upset because she’s pregnant with the child of a man who’s abandoned her; worse, doctors have said there’s a 60% chance her child will be severely handicapped. Ivan tells her the doctors said the same thing about his child before birth, but he turned out splendidly and is a healthy, active boy.

Adam soon realizes that Ivan does not have a precisely accurate view of the world.

Ivan’s son Christoff isn’t healthy. He seems to be in his early teens, and he has cerebral palsy. He’s in a wheelchair and seems unresponsive to most outside stimulus. Adam hears that Ivan’s wife committed suicide and asks about that. Ivan assures him that his wife died from an accidental overdose when she mistook poison for M&M's.

It doesn’t take Adam long to discover that Gunnar and Khalid are not the reformed citizens Ivan proclaims them to be. Gunnar continues to drink and steal, brazenly coming into Adam’s room to take things. Khalid carries guns at all times and will draw with minor provocation. Ivan will not even acknowledge the photograph of Hitler Adam hangs in his room, replacing a crucifix. (Ivan does ask about the dapper man on the wall.)

Exasperated by Ivan’s continuing cheerfulness in the midst of suffering, Adam talks to the local physician. The doctor tells says Ivan “may be weird, but he’s a good boy.” The doctor goes on to explain that Ivan has a large tumor in his brain and is coping with “Ravashi syndrome,” which allows him to see the world as he wishes it were.

Adam makes it his goal to make Ivan see the world as it is, even though Ivan might die from it -- or perhaps because it will kill Ivan. Adam strikes Ivan (a number of times), but Ivan is always ready to turn the other cheek.

There are many references to the Book of Job in the film (whenever Adam drops the Bible Ivan gave him, it opens to that book.) Ivan sees his struggles as being with the devil. Adam asks him whether they come from God, and the question lingers whether everything happens due to chance and blind luck.

There are even more dark turns in the film, but ultimately, Ivan continues to serve God to the best of his mentally ill abilities. And those he serves may well be the better for it, which earns Ivan and the church of Adam’s Apples Three Steeples.

(This film is currently available and Amazon Prime)
Posted by churchandstates at 7:22 AM