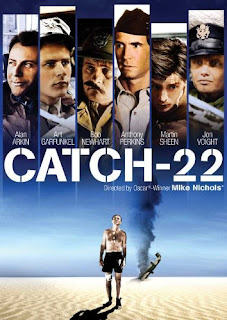 Catch-22 and M*A*S*H (1970)
Two comedies about war were released in 1970; one, Catch-22, was about World War II, while M*A*S*H was about the Korean Conflict -- but everyone *knew* the films were *really* about the ongoing war in Vietnam. Catch-22, based on one of the most acclaimed novels of the 20th century, was directed by Mike Nichols fresh from his Best Director win for The Graduate. M*A*S*H was based on a not very acclaimed novel and directed by Robert Altman, primarily a TV director. Nonetheless, Catch-22 was considered a disappointment in its time, while M*A*S*H was the box office hit, nominated for Best Picture, winning for Best Adapted Screenplay, and perhaps most famously spawning the long-lasting sitcom of the same name.

What’s most interesting for our purposes at Movie Churches is that both films have chaplains, and both chaplains are nice doofuses. Both films deal with big questions about big issues: war, sex, class, race, the meaning of life, and especially death. Both chaplains are without answers.

Catch-22 is particularly about Yossarian (Alan Arkin), a fighter pilot in World War II who’s been told that after a certain number of missions, he’ll be able to go home. When the number of missions keeps being raised, Yossarian tries to get out by claiming to be crazy. A doctor (Jack Gifford) explains to him that trying to get out of fighting is a very sane thing. That’s the catch.

Yossarian is injured when his plane goes down, and Chaplain Tappman (Anthony Perkins) visits him in the hospital. The chaplain asks Yossarian, “How are you feeling?”

When Yossarian asks Tappman the same question, Tappman says, “I have a head cold I haven’t been able to shake.”

“Except for the piece of shrapnel I caught in my leg,” Yossarian responds.

Tappman explains he’s a chaplain. Yossarian says, “I’ve never seen a chaplain before, I never knew a chaplain looked like that.”

Tappman says, “I could get you books, cigarettes...toys.” Yossarian asks if he can get him what he really wants -- to get out of the service. Tappman says he’ll do what he can.


Tappman does try. He goes to see the Major (Bob Newhart), whose full name happens to be Major Major Major Major, but the major tries to hide from him. In the face of bureaucracy, Tappman is unable to help Yossarian.

When people call him “Father,” he repeatedly explains, “You don’t have to call me Father, I’m an Anabaptist.” Most of the brass don’t seem to have much patience for Tappman, telling him, “We need to keep our supernatural events to a minimum.”

Tappman doesn’t believe he has much to offer. “I try to stay out of the way. I find I make men uncomfortable.”

Colonel Cathcart (Martin Balsam) does try to put Tappman to work, telling him “There is a chaplain who has a service before every mission. I want you to come up with some nice snappy prayers that will make the men go out feeling good.” But Tappman isn’t much for snappy prayers.

When Yossarian is considering desertion, Tappman tells him, “I’m not here to judge people.”


Yossarian asks, “What are you here for?”

There are others in the religion business. For instance, Lt. Milo Minderbinder (Jon Voight) works in the black market. Among his products, “Wrists and collar bones of the top saints blessed by the Pope.” He seems to be making a good profit, but he certainly isn’t a good man. 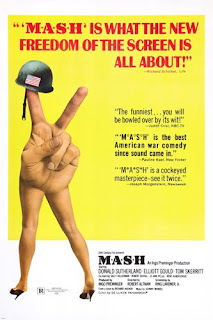 You may already know that M*A*S*H stands for Mobile Army Surgical Hospital; that’s where the film takes place. It focuses primarily on the camp’s surgeons, Captain “Hawkeye” Pierce (Donald Sutherland), Captain “Trapper” John McIntyre (Elliott Gould), and Captain Duke Forrest (Tom Skerritt). I was a little surprised when I watched the film again to see what a constant presence the chaplain, Father John Mulcahy (Rene Auberjonois) is in the film. (He introduces himself as “Dago Red,” and if you think the use of the word “Dago” is an offensive ethnic slur, you might not want to hear about the anesthesiologist, or “gas passer,” Dr. Oliver “Spearchucker” Jones, played by Fred Williamson.)

Upon introducing himself to Hawkeye and Duke, Father Mulcahy says, “If you fellows have any problems, my tent is right over there…” But no one seems to bring problems to Red. In fact, he brings the problem of one of the larger subplots to Hawkeye.

Captain “Painless” Waldowski, the camp dentist, confessed to the priest that he's afraid he might be gay (or in the terms of the film, “a fairy.”) Father Mulcahy is greatly flustered by this problem, which seems to be completely outside his experience, so he brings it to Hawkeye. (Of course, he can’t break the sacrament of the confessional by giving the details, but indicates the severity of the problem when he tells Hawkeye that Painless referred to poker as “only a game.” Serious stuff, that.)

The idea that priests know nothing about sin and/or the human condition is a strange one. As G.K. Chesterton often pointed out in his Father Brown stories, priests hear far more about the depravity of people in the confessional than the average person can even imagine. But Dago Red ends up helping out with the plan to fake Painless’s suicide in order to save him.

Dago Red never seems really useful at following his calling except as an assistant to the true healers, the doctors. When the priest is giving a man last rites in the surgical theater, Duke calls him over to help with an operation saying, “I’m sorry, Dago, but this man is still alive, and that other man is dead, and that’s a fact. Can you hold it with two fingers, Dago?”

When the guys are eavesdropping on Major Frank Burns (Robert Duvall) and Major Margaret Houlihan (Sally Kellerman) making love, Father Mulcahy bumbles in -- mistaking the event for a radio program. “Is this The Battling Bickersons? I love them.” 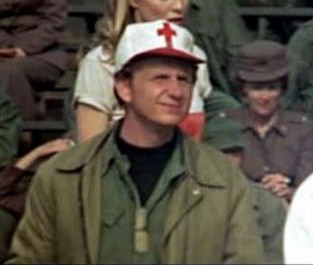 When he finally understands what’s going on, he apologetically makes his exit. He doesn’t recognize the need to condemn this morally reprehensible invasion of privacy.

There is one other overtly Christian character in the film: Frank Burns the hypocrite. The character prays like a Pharisee and blames God and others (but never himself) for the death of his patients, his one good act in the film is mocked by Hawkeye and Duke. Burns is teaching a young Korean boy to read, using the Bible. The friends snicker and give Ho Jon a Playboy magazine to “read” instead. It's baffling to see the film’s “heroes” discouraging the act of teaching reading. Was literacy not cool in the ‘70’s?

The chaplains in the two films have much in common. They are kind, humble men, but both films treat gentleness as weakness, innocence as ignorance, and piety as pathetic. Sadly, both men seem to view themselves as men who have nothing to give.

I’ll be posting this on Good Friday, the day we remember that a gentle, humble, innocent Man died, and His death brought hope for the world. Chaplains Tappman and Mulcahy have the Power of the Resurrection to offer those facing death, but instead, they wallow in impotence.

Though they’re nice guys, I’m only giving these chaplains 2 out of 4 Steeples.
Posted by churchandstates at 7:11 AM