Now In Theaters: I Can Only Imagine

I Can Only Imagine, (2018)
Last month, the big movie business news was the success of Black Panther, which broke box office records and may continue to be the biggest story for the rest of the year. Part of the interest in that story is diversity, a celebration of the primarily black cast and crew making a Marvel action movie. This month, though, the new news story is I Can Only Imagine.

This new film was predicted to make $2 - $5 million on its opening weekend. Instead, it took in $17 million and had Cinemascore rating of A+ with 79% of the audience saying they’d pay to see the film in a theater again. The film even has a “Fresh” rating at Rotten Tomatoes, which is a rare thing for a Christian film. Sure, it couldn’t beat Black Panther and Tomb Raider at the box office, but it did beat other big studio productions (A Wrinkle in Time; Game Night; Love, Simon). As for diversity, it presents a Christian message, which -- in Hollywood -- is a diversity of thought that may be even rarer than racial diversity. 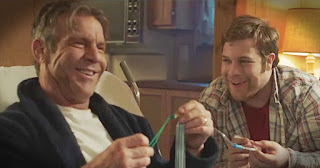 People who’ve seen it seem to love the film, which has some interesting and odd elements. It is the first time lead actor J. Michael Finley (as songwriter Bart Millard) has appeared on the screen (he appeared on Broadway in Les Miserables and Hair). It’s hard to decide if it’s odder to see Finley in his late 20’s (guessing) as a high school student or Dennis Quaid (in his mid-sixties) as the father of a ten-year-old. The film also features 91-year-old Cloris Leachman as “Memaw" (she played "Maw Maw" on the sitcom Raising Hope), who provides the name of Millard’s band, Mercy Me, and the inspiration for the title song (by urging Millard at a funeral to “imagine”).

I thought the film was okay. Of course, I think the song is just okay, but with sales of two and a half million copies, “I Can Only Imagine” is the best selling Christian song of all time. It swept the Dove Awards (the Christian Grammys). It also crossed over into the top 40 of the secular contemporary market. For some reason, the song is on the Christmas playlists of many radio stations.

More importantly, many people have said the film brought them hope and encouragement, bringing them through difficult times in their lives.

Bart was nervous and scared when he arrived, but he was soon befriended by other campers. He enjoyed the food, scenery, and recreation. He even enjoyed a couple of the best things about summer camp that aren’t found in brochures: getting into trouble and first love. 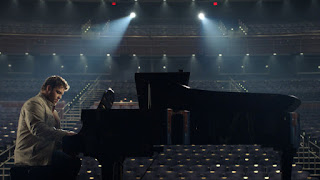 The camp speaker, a youth pastor named Rusty from Greenville First Baptist Church, effectively communicates God’s love and the need for forgiveness. When he gets back home, Bart attends that church, which is in his hometown.

As Bart grows up, he discovers a talent for singing. The pastor of the Baptist Church asks Bart to sing in church (something viewers hear about, but never see). We see teenaged Bart in a coat and tie headed to church on a Sunday morning. His father asks him to stay for breakfast, but Bart explains he needs to go to church to sing, and he asks his father to come along. When his father says he “doesn’t belong there,” Bart asks him to listen to the church service on the radio, telling him the time and call letters.

We later learn that Bart’s father, Arthur (Quaid), did listen to the radio broadcast, and he kept listening week after week. He starts listening to other Christian radio broadcasts and begins to read the Bible for himself. After Bart leaves to pursue his musical dream, God changes Arthur’s life.

Churches don’t usually have camp or media as their primary ministry, but sometimes they do these things very well, bringing hope to -- among others -- a battered little boy and a lost alcoholic. And that’s why Greenville First Baptist, the church in this film, our highest rating of Four Steeples.

Posted by churchandstates at 9:43 AM