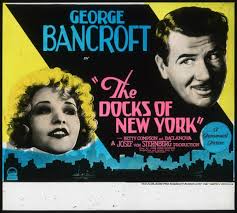 The Docks of New York (1928)
I’m generally hesitant to write about a film that only uses a church as a setting for a wedding or clergy as a wedding officiant, because often the church and pastor are just scenery in film. The church and pastor are not that different from film to film (since they’re essentially set dressing), so they aren’t worth writing about. It’s if one wrote a law blog post about how different Justices of Peace or judges perform wedding ceremonies.

But there are times when a film does use weddings in interesting ways, as in director Josef von Sternberg’s 1928 film The Docks of New York.  Based on a book titled The Dock Walloper (I wish they’d kept that awesome title), it’s the story of a ship stoker, Bill, (he shovels the coal into the fire of a tugboat) who rescues a young woman, Mae, from drowning in the waters by the docks. (His rescue is rather leisurely. He sees her in the water and casually strips down to dive in for her.)

He takes her to a room in a disreputable place called The Sandbar. (A title card assures us that such places used to exist by the docks, one assumes pre-prohibition, but that they exist no longer.) At The Sandbar there is much drinking, dancing, and carousing. We see Bill’s captain flirting with a woman when he sees his wife flirting with another man. The wife tells the captain she can do what she wishes since he “gave her the air” years ago.

There is a sign at the Sandbar that reads, “Save Your Soul and Your Money, Come to ‘Hymn-Book Harry’s Harbor Mission.”  At one point, when the crowd gets rowdier than usual at the Sandbar and it looks like Bill is about to start a fight, the proprietor says, “I better get Hymn-Book Harry before he wrecks the place.” But things calm down before he takes such drastic measures.

Hymn-Book Harry comes to the Sandbar for another reason. Bill decides he wants to marry Mae.  Now Bill doesn’t seem the marrying type. His arms are covered with tattoos of naked women and the names of women from various ports. And it is implied that Mae has what they call a “history” as well.

Harry (Gustav von Seyffertitz) comes into the rowdy bar with a grim, disapproving look on his face. He asks Bill, “Where’s your wedding license?”  The whole idea of the wedding was rather spur of the moment, so Bill and Mae don’t have a license. Harry heads for the door. A woman stops him, saying,  “Are you going to queer our fun just because you got to have a piece of paper?”

Another woman steps to the front of the bar saying she’ll do the ceremony if the preacher won’t. (“Let the old fusser go. I’ll marry you!”) She stands on the bar and asks whether anyone knows of any reason these two people should not be married -- which brings much laughter, but no objections. This visibly bothers Hymn-Book Harry.

Harry asks Mae, “Does it mean that much to you?” Harry asks Bill whether he will get a license. Bill assures him, “Word of honor, Pastor, I’ll get it first thing in the morning.”

Hymn Book Harry performs a traditional ceremony: “Dearly beloved, we are gathered here in the sight of God and in the face of this company to join this man and this woman in holy matrimony. This is an honorable estate, not to be taken lightly.”

What I found interesting was that the crowd begins in a rowdy mood, but seems genuinely moved by the ceremony. They stop drinking and carousing to listen to Harry’s words. Harry brings a moment of peace to the place. When Harry asks Bill whether he has a ring, he doesn’t. But a woman in the bar crowd brings one forward. Bill responds to the questions of the vows with “Sure I will”.

When the ceremony ends, the crowd cheers.

Bill tries to pay Harry after the ceremony. Harry initially refuses the money, then says, “I expect you to bring me a license in the morning -- pay me then.” It seems that Harry is much less concerned about being paid than that Bill will take his responsibilities as a husband seriously.

Whenever I’ve performed a wedding, I’ve insisted on the couple having counseling beforehand, something Harry doesn’t do. I also try to inject warmth and humor into a service, also something that Harry doesn’t do. But Harry is willing to go to a bar to serve others, which wins some points in my book. So I’m giving the ministry of Hymn-Book Harry Three Steeples.
Posted by churchandstates at 2:29 AM