Pennsylvania Film on the Large Screen 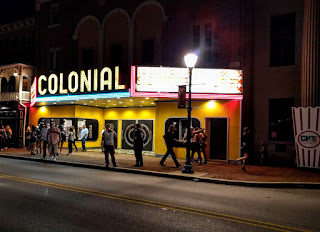 The bat flying around the theater has to be considered a plus. On First Friday Fright Night at the Colonial in Phoenixville, it seemed quite at home. 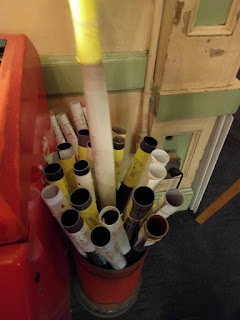 This theater has a long history with horror, science fiction, and the supernatural. Among the live performers to play on the theater stage was Houdini himself. Most famously, the theater was used as a location for 1957's science fiction classic, The Blob. In that film, 28 year old Steve McQueen played a teenager trying to convince the town that a monster from outer space was attacking. The town is convinced when the extraterrestrial amorphous creature sends teens screaming from the theater (interrupting the "Midnight Spook Show") The Colonial now holds an annual event, Blobfest, each July. They reenact the scene when the crowd flees the theater, many (as in the original film) with broad smiles on their faces. 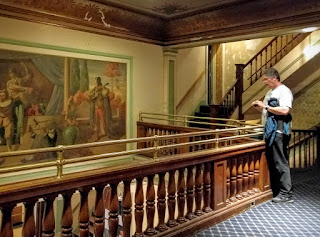 These days, the first Friday of every month is Fright Night, featuring a classic horror film. The film we saw was introduced by a couple of guys with a raffle of promotional art and horror DVDs. One of the films given away was I Spit on Your Grave. After the winner of that DVD was announced, the master of ceremonies said, "That's the first time I've heard people cheer because they didn't have the winning ticket." 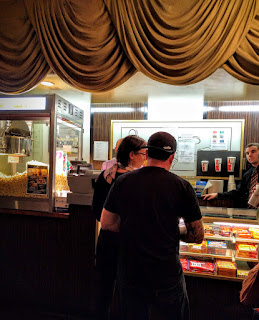 There isn't a church or any members of the clergy in the film, but Piper Laurie as Carrie's mother portrays one of the most unappealing "Christians" in screen history. She harangues neighbors about Jesus until they shut her up by forcing money on her. She abuses her daughter and preaches an anti-sex, anti-woman message found nowhere in the Bible. 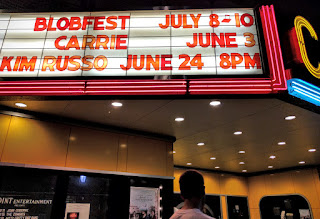 The most disturbing religious aspect of the film is the satanic, blasphemous use of crucifixion imagery.

One thing you have to give the film: after 40 years, it still packs shocks and scares. And if there is a better place to watch a "spook show" than the Colonial, I haven't heard of it. 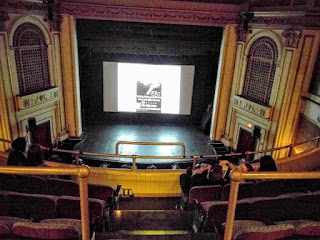