Movie on the big screen in New Jersey 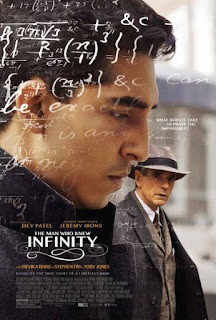 I'm not a medical doctor but I have picked up some cinematic diagnostic skills through the years. So I know that although a cough in ordinary life might just be from a common cold or a sip of water going down the wrong throat, if someone coughs in a movie, that person probably has T.B. (tuberculosis). The accuracy of this diagnosis increases greatly if the film is set prior to World War II. The Man Who Knew Infinity is the story of Srinvasa Ramanujan Ivengar, an Indian mathematician who was born in 1887, so....

Though this film was not set in the United States, let alone New Jersey, much of the film is set at Trinity College, Cambridge, a most prestigious school of learning. We watched the film at the Princeton Garden Theatre, which is just across the street from Princeton University, a most prestigious school of learning. The theater opened its door in 1920. (The first movie shown was Civilian Clothes starring Thomas Meighan. No, I had not heard of that movie or that actor until now.) In 1993 the theater was purchased by Princeton University, and it was renovated inside and out. It now has two screens. In 2014 Renew Theaters took over management. The theater specializes in foreign, independent, and classic films. Our other viewing choices the day we went were Love and Friendship (we saw it in Nashville) or Rear Window (love that film, but it was playing too late). 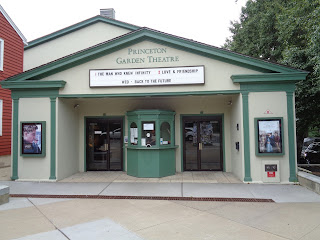 I appreciated that the music played before the film was the soundtrack of The Maltese Falcon. The theater has a nice collection of vintage movie posters and a very cool P.S.A. Apparently, actor Ethan Hawke grew up in the area, and this was his theater. So the star of Boyhood, The Purge, and Gattaca is the guy who lectures the audience on turning off their cell phones.

But back to the movie we did watch. The Man Who Knew Infinity tells the (as always, mostly) true story of Ramanujan (played by Dev Patel of Slumdog Millionaire), an Indian mathematician without a formal education who was brought to Trinity College at Cambridge University just prior to World War I. There is a bit of a Movie Churches angle to the film, too. Ramanujan's mentor, G. H. Hardy, was an atheist and a good friend of Bertrand Russell (author of "Why I Am Not a Christian"). But Ramanujan believed inspired theories were truly inspired, from the gods. Another math guy in the film, John Littlewood, is a Christian (as was Isaac Newton who gets more than a mention or two in the film). 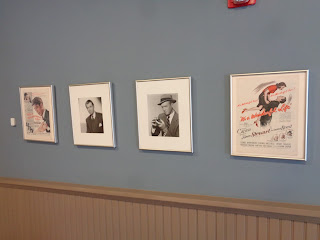 Some have said it's difficult to make an interesting film about writing because neither typing or cursive is inherently cinematic. Frankly, adding and subtracting aren't ripe for montage either. On the other hand,   as we mentioned regarding a New Jersey film on the small screen, A Beautiful Mind (about the great Princeton mathematician John Nash) won the Oscar for Best Picture.

Anyway, there's a reason more films are about cops than actuaries.
Posted by churchandstates at 5:53 AM