Western Month Goes Up in Fire and Brimstone 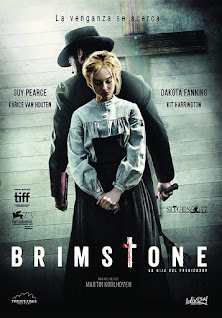 A wise pastor once wrote that every person (at least every worshiping person) has a worship language. Usually, it's the language in which the person first began to worship -- if you first prayed and sang in Spanish, you’ll tend to find Spanish the most meaningful language for prayer and singing your whole life.

Churches started by immigrants in America certainly followed this pattern. At first, the native language of the immigrants would be used in worship (whether that be Norwegian or German or Chinese), and that language would be used by that founding generation. Their children would worship with a mix of their parents' native language and English. The third generation would worship in English. For this later generation, English would be their worship language because it was the language in which they'd understood what they heard.

For some reason, the Reverend (Guy Pearce) in 2016’s Brimstone founds a church of Scandinavian immigrants and insists that the church services be in English. This just doesn’t make sense. It’s very insensitive pastoral care. Of course, this pastor is also an incestuous murderer, but I didn’t want to completely gloss over this insensitive aspect of his pastoral care.*

Brimstone is a story told in four acts, but those acts are not presented in chronological order. The third act, Revelation, is presented first. Exodus, the second act, does come second. The first act, Genesis, comes third. The fourth (and final) act, Retribution, does come last.

In Revelation, we meet “Liz” (Dakota Fanning), the young wife of a frontier husband, Eli (William Houston). He has a son with his former wife, and together they have a daughter. I found it strange that Liz becomes upset when Eli teaches his son to shoot a rifle. Rifles were essential tools on the frontier. Come on, even the Amish use rifles for hunting. Liz is mute, though she can hear. We don’t learn why this is the case until much later in the film. 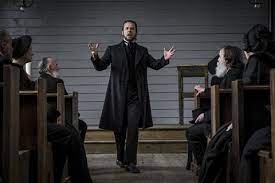 The family goes to church, and Liz is visibly upset when she hears the Pastor’s voice. The congregation sings the hymn “Abide With Me” (which is sung time after time in the film in other church services and by individuals). Why does this happen in so many Westerns?  One hymn is used again and again (often “Bringing in the Sheaves”) Why not use several different hymns with similar themes? It’s not like the production needs to pay copyright fees for using these songs.

But soon, the Reverend comes to Liz’s home, kills the family’s sheep, threatens her daughter, and guts her husband with a knife. He tells Liz he killed Eli because Liz loved him. Liz and the children flee the house to the safety of her father-in-law’s home in the mountains.

In the second act, a younger Liz (who can still speak) is sold to a brothel by a family of Chinese immigrants. Liz learns to adjust to her brutal new world until one day, a man comes to the brothel and pays for all the women in the house. It is the Reverend, who has bought out the house just to get to Liz. When he kills a friend of Liz’s, Liz slices his throat and runs away. (We already know this doesn’t kill the Reverend.)

The third act, Genesis, reveals the beginning of the story. We see the Reverend shame his wife in front of his congregation (which sings “Abide With Me”, of course). The minister complains that his wife doesn’t satisfy him sexually. But when the wife offers to sleep with him, he refuses. (He here disobeys Paul’s instruction in I Corinthians 7 that a husband should not refuse his wife, or a wife her husband). And here we learn that Liz is the Reverend’s daughter and that he wanted sex with her, rather than his wife.

Long ago we made it clear in this blog that murder is a disqualifier from a positive Movie Churches Steeple rating. It should go without saying, but I’m saying it anyway. Incest is also a big negative.

In the last act, there is the final bloody confrontation between Liz and the Reverend, who. has long since proved he is not a good pastor. 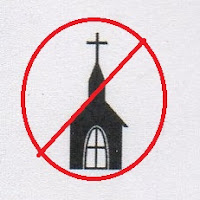 *It is our policy here at Movie Churches to give murderous clergy our lowest rating of One Steeple. Even without the vicious killings, the Reverend would not rate highly.
Posted by churchandstates at 6:05 PM