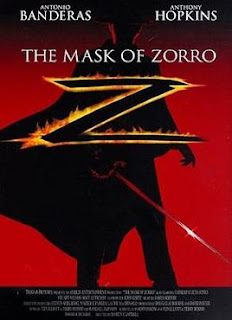 Liberation Theology, the idea that the church should be primarily concerned about the oppressed suffering at the hands of oppressors, is thought to have originated in Latin America in the 1960s. Nonetheless, while watching The Mask of Zorro it's easy to think that the concept originated in Las Californias of the 1820s. The priests in the film are continually at odds with oppressive government forces on behalf of the poor.

The story begins just prior to the era of Mexican independence in 1821. A mysterious masked man named Zorro appears and fights the Spanish authorities in defense of the peasants. Before his forced return to Spain, the corrupt governor Don Rafael (Stuart Wilson) lays a trap to capture and kill Zorro. Three innocent peasants are scheduled to be executed by hanging.

Don Rafael gives a speech prior to the execution claiming to have been the only one who cares for the people. A friar, Fray Felipe (William Marquez), yells out, “Zorro fought for the people!”

“Where is he now, Padre?” the Governor responds.

Zorro soon makes his appearance, rescuing the trio of men before they are hanged. When one soldier has Zorro in his rifle sights, Fray Felipe elbow butts the soldier in the face, rescuing his hero -- but the rescue is short-lived.

Once Don Rafael has captured Zorro, he discovers the masked man's true identity. He is a Spanish-born nobleman, Don Diego de la Vega (Anthony Hopkins), and the governor takes soldiers to arrest him in his home. In the ensuing conflict, de la Vega’s wife is shot and killed. Don Rafael takes the couple’s baby daughter to raise as his own child in Spain, sending the nobleman and the priest to prison.

Twenty years later, Don Rafael along with his “daughter” Elena (Catherine Zeta-Jones) returns to California, this time with a plot to make himself a fortune. This inspires de la Vega to escape from prison, freeing the priest Felipe as well.

Don Diego meets a thief, Alejandro Murrieta (Antonio Banderas), who came to his aid decades before. He agrees to train Alejandro to be the new Zorro so together they can take on Don Rafael and his forces.

Alejandro doesn’t take to the swashbuckling trade immediately. In one of his first attacks on Don Rafael’s men, he is unsuccessful -- but he meets (and fences with) the beautiful Elena. He is forced to flee and seeks sanctuary in a church. Fray Filipe sees him and says, “The years have been far kinder to you than they have been to me.”

She goes on to confess her sin of lusting after a man (Alejandro himself). Still pretending to be a priest, Alejandro assures her that this was no sin, “Sister, you have done no wrong. The sin would be not doing what your heart tells you to do.” Again, Alejandro shows he is theologically lacking.

Soldiers soon come, and Alejandro must flee again -- but he's seen by Elena who then knows she was not talking to a priest.

Fray Felipe appears once more in the film. Don Rafael, angered that the priest again aided (a different) Zorro, has him sent off to work in the gold mines, where Don Rafael intends to make a fortune by defrauding Santa Ana by keeping the gold for himself. The priest, along with other peasants, has been enslaved into serving under terrible conditions at the mines.

This is why Fray Felipe earns our highest Movie Churches rating of Four Steeples. We see him being whipped as he works on the mines, truly living in the steps of Christ, who was whipped for our transgressions. He acts as the Suffering Servant while Zorro(s) act as Savior for the people. By the film's end, liberation for the people does come.

It's worth noting that the film seems to have a more positive spin on the First Mexican Empire than many in the Roman Catholic Church would hold. In 1834, the government of Mexico nationalized the Missions and gave the property to those with political influence. Those lands became ranchos which were the dominant institutions of Mexican California.
Posted by churchandstates at 8:08 PM