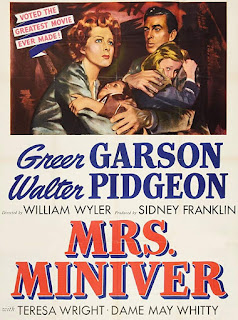 Mrs. Miniver, winner of the 1942 Oscar for Best Picture, is one of the most overtly religious winners of an Academy Award (Going My Way, Ben Hur, and Chariots of Fire would be the other contenders). It tells the story of an average middle-class English woman and her family in a small English town in the first days of the Second World War. An important character in the film is the local vicar, and an important location is the local Anglican church. As to whether it is a Christian film, well, that's another thing.

The film has one fan that certainly wasn't about to be trumpeted by the MGM publicity department. Joseph Goebbels, Adolf Hitler's Reich Minister of Propaganda, said he couldn't help but admire "a masterpiece of propaganda, a first-class production which no doubt will make a certain impression upon the broad masses of the people in enemy countries." Note he didn't say the film led him or would lead others to repentance.

There are four obvious religious scenes in the film, and I'll use them as the basis of the answer to this column's question, "Would I go to this movie church?"

The second conversation Mrs. Miniver (Greer Garson) has in the film is with the local vicar. Her first conversation was in the city (London?), between Mrs. Miniver and the milliner who sells her a rather silly hat. She then happens upon the vicar on the train on her way home. 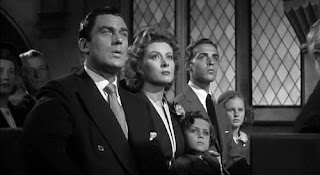 She tells him about the hat she bought and admits to feeling guilty about the extravagance of buying this unnecessary item. The vicar then confesses to buying expensive cigars he really can't afford. They both then laugh about their "lovely guilty feelings." Mrs. Minniver says that's why she's sure the vicar can do much good in their town because of his understanding of the people.

I'm not sure whether the vicar is doing much good here. It can be a fine thing to buy a silly hat or good cigars. But if a Christian feels guilty about the purchase, I believe examining one's own heart is important. Perhaps the purchase isn't a good use of what, really, is the Lord's money. I'm not sure a blanket endorsement of consumerism is really good ministry. Throughout the film, the vicar always feels at one with the culture of the world.

The "religious" scene in the film is in the local church. Everyone in town seems to be there, including Lady Beldon (played by Dame May Whitty) the rich town aristocrat. She has her own pew, which has a door with her name on a brass plate. I couldn't help of think of James 2, where the writer tells readers not to show preference in church to the rich.

A nice little boys' choir opened the service, and the vicar then led the congregation in a prayer of confession. Then the service is interrupted when someone brings the vicar a message. The vicar announces that the nation is at war. And then the vicar says a rather amazing thing. He says, "Many of you have other duties to perform," and he dismisses the congregation. Now it's true that some people have other duties to perform, but it seems like he's discounting the importance of prayer and worship at such a time.

There is a nice little scene in the film between Mrs. Miniver and station manager and church bell ringer Mr. Ballard (played Henry Travers, Clarence of It's A Wonderful Life). Mrs. Miniver's husband has gone off in his boat to aid in the retreat at Dunkirk. Ballard encourages her by quoting Psalm 107, "Some went out on the sea in ships... They saw the works of the Lord." That says something about the church (and perhaps the schools) of the time and the teaching of Scripture. Ordinary people could quote Scripture. In fact, in The Miracle of Dunkirk, England was notified of their need with three little words, "And if not." People of the time knew that was a quote from Daniel 3, the story of Shadrach, Meshach and Abednego, and the rescue was on its way. An amazing thing. 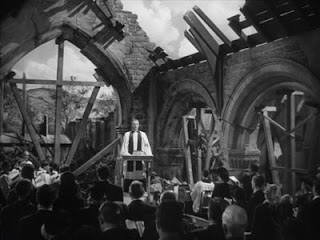 My big problem with the film comes in the finale. There is a memorial service in the church for those who died in a German air raid (including two characters that were quite dear in the film).

At the service, the vicar asks the question that all are thinking at such a time, "Why?" -- always a difficult question, particularly when the young and innocent die. A minister at such a time must wrestle with Scripture (perhaps looking at Luke 13 when people ask Jesus about people killed in the fall of a tower and by Roman soldiers).

But after reading a Psalm, the vicar ignores the Bible altogether and recruits the dead into the war effort, for this is "not just a war of soldiers in uniform, but of all the people." Abraham Lincoln was asked the place of God in the American Civil War, and he was not quick to claim God was on his side. But the vicar jumps right to it: God is English.

Perhaps it's not an accident that the church in this film is a state church. It is at one with the English culture and government. So if I was in the world of this film, I'd probably go to the church because it's the only one in town. But the vicar would be hearing from me on a fairly regular basis.

(This post first appeared in our Dean and Mindy Go To Church Blog before there was a Movie Churches blog back in 2015.)
Posted by churchandstates at 9:01 PM