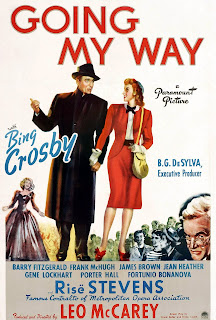 Is there anything more riveting than church finances? I guess there are a million things or so. But really, that's what Best Picture Oscar winner Going My Way (1944) is all about. Like every melodrama of the 19th century, the film is about paying the mortgage.

The film opens with Father Fitzgibbon (Barry Fitzgerald) begging the president of Knickerbocker Savings and Loan for an extension on their mortgage AND money for a new furnace. Fitzgibbon established the church 45 years before and yet still has a mortgage, which the church is six months behind in paying.

There are subplots in the film only tangentially related to the money thing. Bing Crosby, as hep young priest Father "Chuck" O'Malley, comes to the church to help out. He turns a gang of young turkey thieving, slang spouting hoodlums into a boys choir (with happening tunes like "Three Blind Mice"). Both priests try to counsel an 18-year-old "runaway" woman that she shouldn't pursue a career in show business, but rather settle down as a wife and mother (spoiler, she eventually takes their advice). And there is a gossiping elderly woman in the church named Mrs. Quimp. The priests never give her biblical counsel about the sinful nature of gossip, but instead listen to the gossip, then call her a biddy behind her back. But really, the film is about the Benjamins. 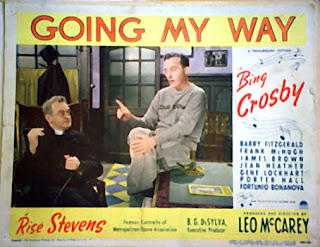 To start with, not knowing the history of the finances of St. Dominic's, a church hasn't paid off the mortgage after 45 years has probably been irresponsible with their resources. In fact, though O'Malley insists that "every respectable church has a mortgage," there are many congregations that with planning, wisdom and foresight, and God's grace, avoid debt.

I've been in churches in financial straits. They usually take the following steps:

1) Pray. This has always been the first thing done; bring the church's cares to the One who "owns the cattle on a thousand hills". Doing this never discussed by the priests in the film. 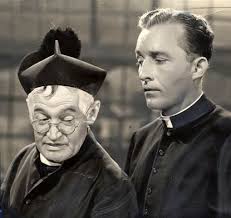 2) Look for places to cut. But no, when O'Malley comes to the church, he starts spending. He takes his boys' choirs to movies and ballgames. (To be fair, the baseball tickets are free. For some inexplicable reason, the New York Yankees seem to give unlimited tickets to Chuck because he used to work out with the Cleveland Browns).

3) Look for other sources of revenue. This could include things like renting out the facilities or selling off property. Father O'Malley does this. He tries to sell a song he wrote to a music publisher. This is a financial act roughly on the level of buying lottery tickets to get out of debt. I can just imagine if I'd gone to church trustees saying, "I've got a plan for making the budget work! I'm going to write a best-selling novel." But since this is a movie, the selling-a-song thing (spoiler) works. 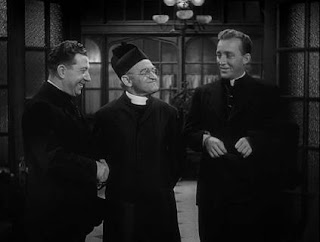 4) Bring the problem to the people. At the beginning of the film, the Savings and Loan president suggests to Fitzgibbon that he should do a sermon encouraging giving. The priest scoffs at the idea, saying he's not going to preach the mortgage agreement. (The president also suggests he could speak on being a "cheerful giver", a reference to II Corinthians 9:7, which may be more reference to Scripture than either of the priests makes during the film.) At the end of the film, Fitzgibbon does preach about giving, and O'Malley tricks him into thinking the sermon works --even though it's money from the song that saves the church. Deception is a fairly regular practice for these priests.

The thing that annoyed me most in the film is the way the money lenders are portrayed as bad for wanting the church to meet its payments. This kind of arrogance and assumed privilege is what gives the church a bad name in the world.

But let me conclude on a more "spiritual" note. We learn that Father O'Malley became a priest so he could show that religion isn't a drag, but can be fun. His theology can be found in the lyrics of the title song, which he writes as his testament of faith. In conclusion, I invite you to exegete the lyrics: 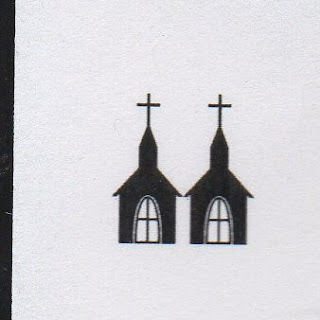 "This road leads to Rainbowville
Going my way
Up ahead is Blue Bird Hill
Going my way
Round the bend, you'll see a sign
"Dreamers Highway"
Happiness is down the line
Going my way
The smiles you'll gather
Will look well on you
Oh, I hope you're going my way too."

May I just say to that, "Amen" or "Bibbidi Bobbidi Boo" or something.

(This post was originally found at Dean and Movie Go to Church in 2015. This was prior to rating churches by Steeples, but this church and Bing would probably have rated Two Steeples or so.)
Posted by churchandstates at 9:43 PM