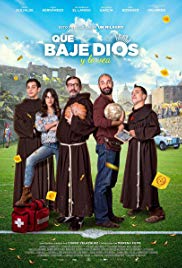 I call it “the mortgage plot.” Movies have used this one since the beginning: the ranch or the school or the camp will be lost unless rent or mortgage or roof repair money is raised. Among the most famous in the genre are the Judy Garland/Mickey Rooney musicals (Babes in Arms, Girl Crazy, Strike Up the Band) where the answer to every financial question is “Let’s put on a show!” Basically, these are films about raising money pre-Go Fund Me.

There have been plenty of Movie Church mortgage stories. In Going My Way, all Bing Crosby had to do to cure money woes was make a hit record. In Rolling Home, betting on the right horse provides the solution (you’d think that would lead to some awkward questions from the church board). In The Leather Saint, boxing money paid the rent, and wrestling money did the same in Nacho Libre.

The seminary in Holy Goalie has financial problems, too. (Holy Goalie, a Spanish film presented with English subtitles, can currently be found on Netflix, a Spanish film presented with English.) For some reason, the Vatican wants to close down St. Theodosius because it’s not earning its financial share (I don’t really understand Roman Catholic finances in films). The school is going to be merged with another nearby seminary. Who can find a solution to the problem?

Help comes in the person of Father Salvador (Alain Hernandez), a Catholic priest who worked as a teacher in Africa. When soldiers threatened to kidnap his students, he hacked into the Vatican Bank for the ransom money. The Vatican was not pleased. His superior transferred him to St. Theodosius seminary in Spain, telling him, “No more Indiana Jones, no more Africa.” 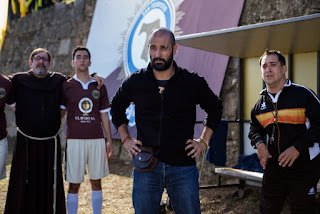 The seminary also serves as the community’s parish church. When we first see Mass served, there’s a bit of chaos. The congregants don’t line up properly for the bread and cup, and novice Ramon (El Langui), who has cerebral palsy, spills the elements he is assigned to carry.

Father Munilla (Karra Elejalde), the headmaster of the seminary, is at his wit’s end about how to save his school. The seminary has made pastries to support themselves, but that’s not doing the job anymore. Salvador brings new ideas for the seminary, what he calls a New Christianity. I’m not sure what this New Christianity is about, but a lot of it seems to revolve around soccer.

Sal insists that a soccer team, by joining the Championship League, will save the school. Ramon wants to join the team and tries to impress the coach by butting a ball with his head. Sal agrees he can use his head, makes the novice assistant coach. But they still need more help, so Sal recruits someone outside of the seminary. His “savior” is named Jesus. Jesus is a local entrepreneur selling knock off underwear (“Kelvin Klin” brand).

Jesus is an “evangelical” (which in this film seems to be synonymous with “charismatic”). He feels he must get permission from his pastor, Father Gabriel. (It is strange to have an “evangelical” pastor called Father. Jesus has a tattoo of Gabriel on his arm, which seems rather idolatrous. Father Gabriel preaches rather like a TV preacher in spite of the lack of cameras. “Give up alcohol! Give up nose candy! Hallelujah! You’re on the glorious path of the Nazarene!”)

When Sal talks to Gabriel about joining a Catholic team, he is not interested until he hears they hope to play against the Vatican team. He says, “Have you ever seen an Evangelical play against the Pope?” Gabriel only asks for a few Euros -- a bribe so he can advise Jesus to join the St. Theodius team.

As the team moves along toward “the big game” (as teams do in any standard sports film), they play church teams and secular teams, and there often isn’t good sportsmanship on either side of the field. Eventually they make it to the “big game” against the Vatican team. And, as they do in sports films, there is a big bet on the game. The fate of the seminary and Sal’s ministry is on the line.

Spoiler alert! We get to see Sal go back to his ministry in Africa, and he seems to be doing excellent work in education. So I’ll give Sal and St. Theodosius Three Steeples. (Father Gabriel would not do nearly as well, I’m afraid.)
Posted by churchandstates at 3:43 PM