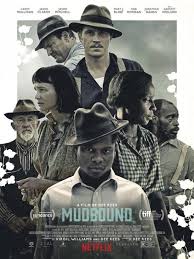 Mudbound (2017) and The Negro Soldier (1944)
We’re beginning Black History Month with a film that many expected to get more Oscar acclaim than it received. Sure, 2017’s Mudbound received nominations for Best Supporting Actress (Mary J. Blige), Adapted Screenplay, Cinematography, and Best Song (“Mighty River”), but many expected the film to be nominated for Best Picture as well.

Maybe the Academy members thought of it as TV rather than film because it’s from Netflix. But that doesn’t matter to us, because it has an African American church, and that’s all we need for it to be featured in this month’s lineup here at Movie Churches.

Mudbound is based on Hillary Johnson’s 2008 novel. It tells the story of sharecroppers in the Mississippi Delta during and after World War II. A black family, the Jacksons, barely scrapes by, making friends and enemies with the McAllans, a white family. Pappy McAllan (Jonathan Banks) is a Klansman who doesn’t like his family associated with “inferiors,” but his daughter-in-law Laura (Carey Mulligan) comes to depend on midwife Florence Jackson (Blige) as a servant and -- later -- as a friend. 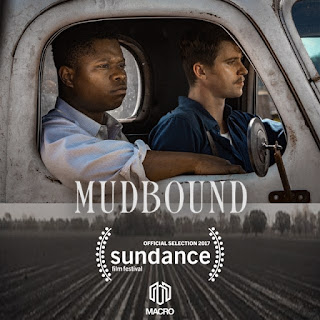 The heart of the film, though, is the story of the families’ two sons, both of whom serve in World War 2. Jamie McAllan (Garrett Hedlund) serves in the Air Force; Ronsel Jackson (Jason Mitchell) commands a tank in the Army. Their families are anxious as their sons serve. Florence says “Through those four years, I only prayed for him. God’ll forgive me.”

When Jamie and Ronsel return home to their families, they strike up a friendship that strengthens them both, but sets off great conflict between the families. In their service for their country, both men learned about manhood, and that race has nothing to do with a man’s worth.

The Jacksons find support in their church. For some reason the church building is never quite complete, just a wood frame, through the years, but the congregation seems joyful as they sing (“Do You See How They Done Me, Lord?”) and listen to their preacher (“One mornin’ we will shake these chains from around our feet,” he says).

Faith doesn’t seem to touch the life of the McAllans, though. It is an odd thing in our culture that the media seem much more comfortable showing church as a healthy part of life in black families but not so much in white families.

The church has long been central in the life of African American families, and it’s no coincidence that when Frank Capra was given the task of making a World War 2 recruitment film for the Black community, he set that movie (The Negro Soldier) in a church. 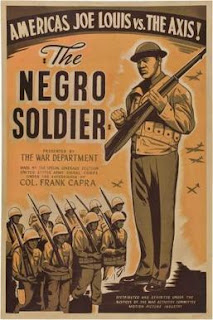 Though The Negro Soldier is called a documentary it is not all, strictly speaking, “true.” The U.S. military asked Capra to make a follow up to his Why We Fight with a film that would both encourage blacks to support the war effort and assure whites that blacks serving is a good thing.

The film opens with images of churches: churches in the country and churches in the city, wooden structures and stone cathedrals, eventually focusing on a neo-gothic building in an urban setting.

An African American soldier sings “Since Jesus Came into my Heart” with backup from the choir. The pastor (played by an actor and filmmaker, Carlton Moss) thanks the soldier for his singing and for his service. The pastor acknowledges the servicemembers in the congregation (there’s a woman in uniform in the congregation as well as several men) and announces he is going to depart from his text, ad libbing a sermon honoring the service of African Americans in the current conflict and throughout American history. 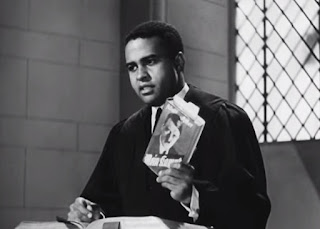 The pastor says he had just visited the USO where he saw Joe Lewis, which reminded him of the fighter’s championship battle. But, the pastor points out, now the battle is not just man vs. man but nation vs. nation. At stake is the United States.

Then the pastor, in his “impromptu” sermon, pulls out a copy of Mein Kampf, referring to it as “The Gospel According to Hitler.” (This confused me. Does the pastor always carry a copy with him?) He read aloud a passage about the inferior nature of “coloreds,” calling them “half apes.” The pastor argues that Nazis are evil and must be stopped.

He goes on to highlight the achievements of African Americans through the centuries, starting with Crispus Attucks, who died in the Boston Massacre, through the Revolutionary War, the War of 1812, the Civil War, the Spanish American War, the building of the Panama Canal, and World War I. He notes the how the black Americans in that conflict were honored by the French, noting a memorial to 371st Infantry that was later torn down by the Vichy government. 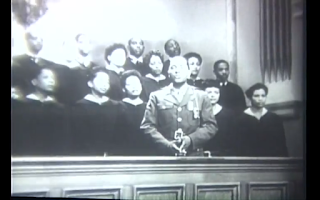 The pastor then points out the contemporary achievements of African Americans in law, medicine, and education. (This film is said to have done much to inform people’s perception of the accomplishments of blacks in a variety of fields.)

A woman in the congregation interrupts the sermon to ask if she can read a letter from her son, who’s in the infantry (you can tell that this is a fictional scene because the pastor allows someone to take away from his sermon time).

In the letter, the son tells about his basic training. He mentions a speech from the chaplain, who tells the soldiers he’s not only there for religious services, but also to provide counselling for any problems the men may be experiencing. The letter tells about the hard work in training, but also notes they have time for sports and worship services.

After the mother finishes reading the letter, noting with pride that her son has become an officer, the pastor returns to his sermon. He encourages the congregation to continue the fight by supporting their men and women in service until they come victoriously into Berlin and Tokyo.

He closes in prayer, “Oh God, we thank you for this land our fathers built with a government of the people, for the people, that will not perish from this earth.” The service (and film) concludes with the congregation singing “Onward Christian Soldiers.”

The America presented in each film is very different, though the time period is the same. Mudbound shows a country rife with prejudice and division. The America of The Negro Soldier seems almost like paradise -- if it weren’t for the dangers posed by evil foreign countries.

The churches in both films provide community and hope to their congregations, but not much in the way of Biblical or theological content. Both churches seem to serve the country well; it would have been good if their service of the Lord was as evident. We’re giving the churches of Mudbound and The Negro Soldier three steeples out of four.
Posted by churchandstates at 7:20 AM