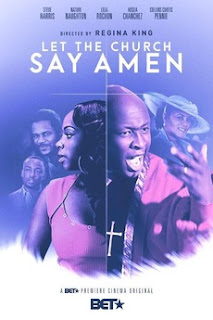 IMDb (the Internet Movie Database) offers a synopsis for the 2002 documentary Let the Church Say Amen that reads, “In Washington D.C., one church becomes the symbol of a local community dedicated to one another” -- which is fairly accurate. The database also lists a 2013 made-for-TV movie Let the Church Say Amen and gives the exact same plot synopsis -- which is not at all accurate. (There was another Let the Church Say Amen, a docudrama from 1971, but I couldn't view it in time for this post.)
Here at Movie Churches we usually look at theatrical narrative films, but today let’s look at these two films with the same title, even though one was made for TV and the other is a documentary. Both are about African American churches (one fictional, the other real) and because of that, they fit in nicely with this month’s theme.
2013's Let the Church Say Amen is based on ReShonda Tate Billingsley’s novel of the same name. For years, Simon Jackson (played by Steve Harris), the pastor of Zion Hill Church, has paid much more attention to his church than to his family, and his family is falling apart. Though the Bible verse is never mentioned, the theme of this story is in First Timothy 3:5, where Paul gives instructions about choosing church leadership: “For if a man cannot manage his own household, how can he take care of God’s church?”
This is a difficult verse for a number of reasons. Most of the great leaders of Scripture, like Jacob or Eli the High Priest or King David, had problem children. Besides that, Christian theology teaches clearly that everyone is responsible for their own moral choices. God as a Father has many children who have gone astray.
I think that verse teaches that while children are in the home, church leaders should be loving fathers who provide material needs, kindness, support, discipline, and direction. Usually, kids will turn out well in such an environment, but there are no guarantees. 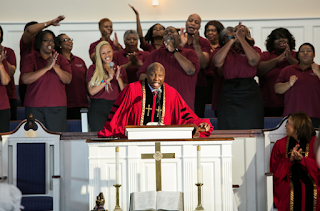 The film opens with daughter Rachel (Naturi Naughton) arriving late to Sunday morning worship, just before her father’s sermon. In voiceover, Rachel gives her backstory, explaining she’s a single mother. Her son’s father, Bobby, and his new girlfriend also attend Zion Hill Community Church -- the church Rachel’s father founded and pastors.
The choir sings “Tell Him What You Want” before Reverend Jackson begins his sermon, “God Can Bless a Hot Mess.” He describes the problems and depravity of contemporary culture, hitting on many of the seven deadly sins but assuring the congregation, “a mess can be cleaned up; it ain’t never too late for God to clean up your hot mess!”
We learn about the rest of the family. The mother and First Lady of the church, Loretta (Lela Rochon), has faith that God will work in her family, though they face great challenges. Her oldest son, David, has overcome a drug addiction but has a gambling problem and is unable to keep a job. Only the younger son, Jonathan, seems to have his life together. He’s just graduated from college, and everyone expects him to become engaged to the nice young woman he’s been dating for years. His parents plan for him to assume his father’s role as pastor after finishing seminary (Frankly, this idea of an inherited pastorate puzzles me, as if the pastor were king or ministry was a family business.)
But Jonathan’s life has its troubles. He might not want to follow the plans his father has for his life. He might want to see other women, and he might rather study architecture instead of going to Fuller Seminary -- but he’s afraid to tell his parents these things.
The real trouble in the film comes when son David is caught stealing the church funds to pay off his gambling debts. And when Rachel is arrested for physically assaulting Bobby’s fiancee. The church board is concerned and considers firing Reverend Jackson.
I have some questions about Rev. Jackson’s ministry myself. It seems that Zion Hill Church is a hotbed of gossip, with everyone talking about the pastor’s children and the children of other leaders in the church. The church leadership seems to be indulging in intrigue and infighting. It just doesn’t seem like a healthy place.

At the end of the film, Rachel stands in front of the congregation and pleads that they’ll allow her father to keep his job, arguing that he has been a living example of Jesus’ sacrificial life. She notes that her father missed important parts of his children’s growing up like school dances, sporting events, and honors ceremonies because he was attending to the lives of those in his congregation. To me, that shows that Rev. Jackson really should have been delegating more. He should have been there for his children, because they, too, are important in God’s eyes and they’re part of the congregation.
So I’m giving the church in the 2013 version of Let the Church Say Amen a rating of two Steeples out of four. 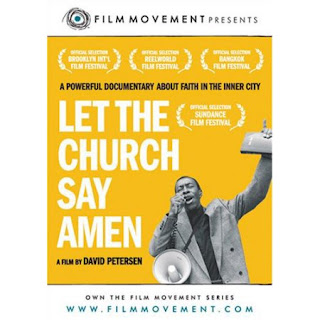 I’m glad to say the church in 2002’s Let the Church Say Amen is a good church, because it’s real. Documentarian David Petersen spent most of 2001 filming at the World Mission for Christ Church in a poor neighborhood of Washington D.C. (though there is no mention of the jet crashing into the Pentagon).
The church was founded in the 1970’s, by Dr. JoAnne Perkins, whose mother brought her along with her eleven siblings to the city, where life was a struggle for them all. While on welfare, JoAnne earned her doctorate in Special Education and purchased the grocery store that became a storefront church. At the same time, her brother Bobby slipped into drug addiction.
Through his sister’s ministry, Bobby came to trust in Jesus and overcame his addictions. He now serves in the church. The film documents Bobby preaching, leading singing, distributing food and clothing to the poor.
The film also examines the lives of parishioners. Darlene Duncan, the mother of eight, wants to become a nurse’s assistant and get off public assistance, but she only has a sixth-grade education and must pass a test to get into the program. We follow her progress, and with hard work, she passes that test and eventually finishes the program. She credits the pastor of her church, the parishioners, and God for getting her through. She says, “The big churches, they don’t care if you come back or not. But at World Mission everyone is somebody.”

David Surles was a homeless man whose life was turned around in Christ, and now he feels the need to give back. “Coming from the streets, you’ve got to be willing to go back to the streets.” He tells an addict on the curb, “Don’t give up on Jesus. He cares about you.” He dreams of one day owning a house, and we see him take the first steps on that path.
A more tragic story is found in the life of Cedric Fulmore, whose son is stabbed and murdered by a gang member. “My pastor was there in five minutes,” Cedric says. He becomes frustrated by the pace of the police in pursuing justice, but his faith in Jesus grows as he looks to Him for hope. Before filming was complete, his son’s killer turned himself over to the authorities.
The church offers hope to the poor of their neighborhood, bringing in doctors and nurses to provide needed health care, along with blood pressure and vision checks, but the members of the church consider their primary gift to the community is offering the blessing found in knowing Jesus Christ as Lord and Savior.
As Brother Bobby preaches, “Blessings in not these clothes you got on, not your bank account, not that your belly is filled with black-eyed peas, but because your name is written in the Lamb's Book of Life.”

It is that kind of preaching, and that kind of service, that compels us to give World Missions for Christ Church our highest rating of four Steeples

Posted by churchandstates at 7:40 AM