Maryland films on the small and big screen 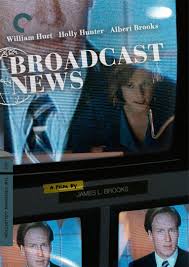 While visiting in Maryland, we noticed it was hard to stay in the state. We were so close to the Virginia and District of Columbia borders that we found ourselves crossing back and forth. That makes me feel a little better about going with the film Broadcast News as our Maryland movie, even though only part of the film is set there. It's also set in Virginia and D.C., so the film was like our time in Maryland.

James L. Brooks' 1987 comedy was certainly prescient about the future of televised news, predicting the growth of fluff and human interest to drown out hard news, as well as the growth of the celebrity culture. William Hurt, Albert Brooks, and especially Holly Hunter in tears bring their characters to life to a degree that I almost wonder what Tom, Aaron, and Jane are up to these days.

There are no churches in the film, but there is one interesting theological point well illustrated. Albert Brooks says that Tom the anchorman is the devil. He argues that the devil would not appear with horns and pitchfork, but rather as an attractive person persuading others to lower their standards just a bit at a time. The Apostle Paul made the point before, in II Corinthians 11:14, but it bears repeating.

There are quite a few Maryland films, more than we can cover here. But there are some interesting authors in the state who have located their work locally. Edgar Allan Poe doesn't seem to be one of those; for all I can tell, all of the Poe films are located elsewhere. But Anne Tyler, a favorite writer of mine, usually locates her work around Baltimore. The Accidental Tourist, which also starred William Hurt and won Geena Davis an Oscar, is set in Baltimore. 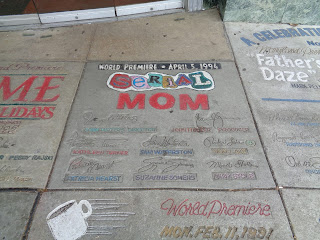 Baltimore native writer, filmmaker, and eccentric John Waters usually makes films locally. Since Waters prides himself on his bad taste, there are a number of films I won't mention here because even his titles some find offensive. His most popular work was almost certainly 1988's Hairspray,  which was made into a Broadway musical and then made into a film again  (I prefer the original). If you like that film, you might want to give 1990's Cry Baby with Johnny Depp a try. 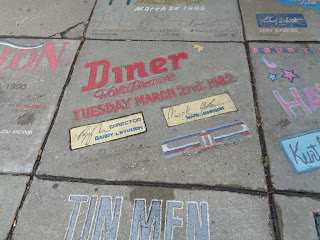 Another Baltimore talent is the Oscar winning writer and director Barry Levinson. 1982's Diner, 1987's Tin Men, 1990's Avalon and 1999's Liberty Heights are all set in Baltimore and have more than a bit of autobiography in their making.

Of course, non-Marylanders have made films in the state. Alfred Hitchcock set much of 1964's Marnie with Sean Connery and Tippi Hedren in Baltimore, and there is much argument in the film community to this day about whether that film is a masterpiece or a disaster.  Norman Jewison's ...and justice for all is set in Baltimore and features what may be Al Pacino's greatest set-chewing performances ("You're out of order! You're out of order! The whole trial is out of order!").

And, of course, though we usually only talk about fictional films here, the documentary The Blair Witch Project was all filmed in the forests of Maryland. At least the internet told me so, and why should I ever doubt it? 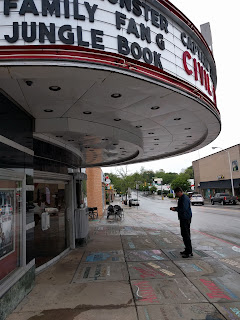 We came upon a pretty wonderful place to watch movies in Baltimore, the Senator Theatre. With a unique circular design, the theater does what every great movie theater does: makes guests feel they are entering a different world. An art deco flavor and more modern touches (the large theaters have screens that can be viewed from the lobby for the ultimate cry room) make this a very cool place.

But even before you get inside, in a blatant but loving rip-off of Grauman's Chinese Theater, the sidewalk squares on the street feature films that have debuted or celebrated anniversaries at the Senator with autographs of actors and directors. 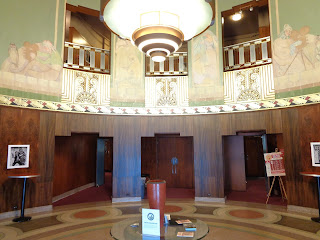 The film we watched at the Senator was The Family Fang, directed by and starring Jason Bateman (Little House on the Prairie, Arrested Development). This black comedy about a performance artist (Christopher Walken) who uses his family for his work is at times funny and at times disturbing, but what I appreciate most about it was that it introduced us to the Senator.

Posted by churchandstates at 5:28 PM