West Virginia movies on the small and big screen 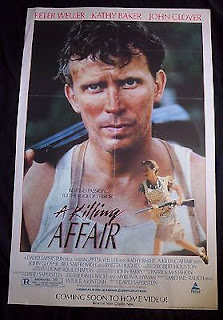 I almost wonder if there is some technical problem with getting film cameras to work in West Virginia. I found a film set in West Virginia, free on Amazon, starring Peter Weller (yes, the man who played Buckaroo Banzai and Robocop, so one of the best actors ever), 1986's A Killing Affair. So I watched it. It was obviously made with a low budget, but it did have some interesting scenes for movie churches. John Glover (of Robocop 2) plays a fundamentalist preacher quite willing to preach about the need for women to submit to their husbands, but as for husbands loving their wives as Christ loved the church... Not so much. If I was giving out Steeple Ratings for the minister and his church in the film, he'd probably have to settle for one. But when I went to look up where this "West Virginia" film was made, it was filmed in Georgia.

Mindy and I were in Coalwood, WestVirginia, the setting of a much beloved film about boys in a coal town encouraged to pursue science, 1999's October Sky. It's a true story, so surely the film makers would want to go to the original location. Nope. It was filmed in Tennessee. 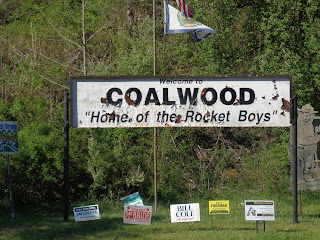 In Point Pleasant, West Virginia, there have been bizarre local legends about a mansized bird that terrorized the country side. So in 2002, when a film, The Mothman Prophecies, was made starring Richard Gere (not as the creature), it was filmed, of course, in Pennsylvania.

There have been a series of no less than six awful films about hillbilly cannibals set in West Virginia. They're called Wrong Turn (the original) and then 2:Dead End,  3:Left for Dead, 4:Bloody Beginnings,5:Bloodlines, and 6:Last Resort. I'm happy to say I haven't seen any of these films, especially because they were all filmed in Canada. A film I have seen, Tucker and Dale vs. Evil, is a spoof of movies like the Wrong Turn films. It's a clever and funny film which is set in West Virginia -- but was also filmed in Canada.

You will be glad to hear that there is at least one major motion picture that is set in West Virginia and even filmed in West Virginia. 2006's We Are Marshall, starring Matthew McConaughey, is about the football team of Marshall University which was lost in a plane crash. It's a rare chance to see West Virginia in a feature film. 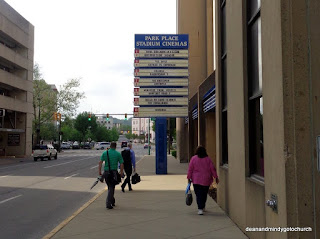 We went to the movies in the state capital, Charleston. The Park Palace seems to be aiming for complete automation, but the ticket selling machine was broken so we bought tickets from the nice cashier. She also sold popcorn cups and soda cups for the self-serve machines. If they can figure out a way to automate cup dispensing, The Park Palace might become a human free place (except, perhaps, for the customers).

The film we saw, My Name is Doris, starred Sally Field as an elderly woman with a crush on a young co-worker. It does open with a scene in a church, a funeral in which a useless pastor talks about the deceased only as a mother. This church would also only earn one Steeple. 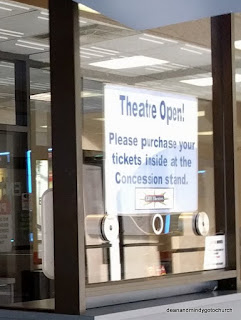 The film seems to believe that Millennials are the sole users of Facebook. The film also apparently could not get the rights to Facebook so the screenshots are nothing like the real site. Also a hip new term used by the young people is "doners" for when one is finished with a relationship. I got the feeling the script was written to be current but took a decade to reach production. 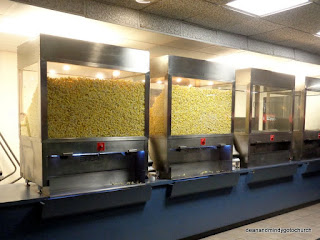 Posted by churchandstates at 7:34 PM