Tennessee films on the small and big screen 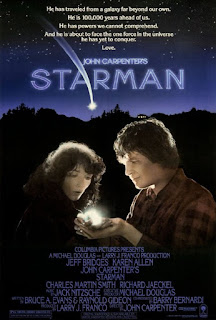 I know Starman seems like a strange choice for our Tennessee film, so I probably should explain about our DVD folder. Before Mindy and I began our 2016 trip through the United States, we had to store or dispose of our belongings, including our DVD collection. We took a folder and labeled each slot with a state name in alphabetical order, then we looked through our collection to find a film for each state. For some states, like Pennsylvania (The Philadelphia Story or Rocky) or Illinois (The Sting or The Untouchables), we had many choices. But for some states, we didn't have an obvious choice in our collection. But with a little research, I found that most of Starman (which we already owned) was filmed in Tennessee. This is strange, because according to the story of the film, a woman is abducted by an alien in Wisconsin, and they travel to Arizona. We could see that they took a path through North Carolina, which makes no sense. This startling lack of respect for geography allowed director John Carpenter (Halloween) to use the home of the Grand Old Opry in place of the Cheese State.

Starman doesn't have a church, but like other films about alien visitors (Superman or E.T.), it can be seen as a parable about the Messiah. This film even has a supernatural pregnancy, where the child will be "a great teacher." It's also just a fun film, with winning performances by Karen Allen (Raiders of the Lost Ark) and Jeff Bridges (The Big Lebowski).

There are many films set in Tennessee that we just didn't have in our collection. For instance, there is the film about the man "born on a mountaintop in Tennessee." Disney used the footage from their television mini-series about the great frontiersman and recut it as theatrical feature,
Davy Crocket: King of the Wild Frontier.

A couple of films that are based on true stories will be featured in the next few months of Movie Churches, and they're Tennessee films. When we get to Science Movie Churches, we'll feature Inherit the Wind  (a fictionalized telling of the Scopes Trial which took place in Dayton, TN).  The 1960 film version of the stage play is set in Tennessee but wasn't filmed there. In the months to come we'll also be featuring Movie Churches in World War I films, and one of those will be Sergeant York, with Gary Cooper as the soldier marksman from the backwoods of Tennessee.

Another movie based on truth story that will probably never appear in Movie Churches is Walking Tall, the 1973 exploitation film about Buford Pusser, a lawman who singlehandedly cleaned up a small corrupt Tennessee town. The whole movie was filmed in the state.

And if you're looking for a Tennessee aqua double feature, you could watch Elia Kazan's classic
Wild River with Montgomery Clift and Lee Remick, along with The River with Mel Gibson and Sissy Spacek (released the same year as Country and Places in the Heart, making 1984 the year of the farm film).

The quintessential film for the city we were staying in, Robert Altman's Nashville, is a classic 1975 satire that has a place on the National Film Registry. It also the song,  I'm Easy. 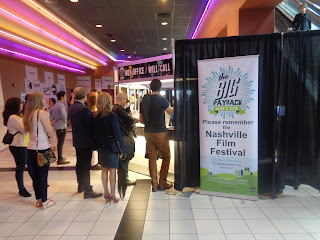 We happened to be in Nashville for the start of the 2016 Nashville Film Festival. The films were screened at Regal Theaters (the only theater chain we've seemed to be able to visit the last few weeks). But the movie we were interested in, Whit Stillman's Love & Friendship, was sold out. We were told we might have a chance to see it if we stood in the rush ticket line. It worked; we were able to buy a ticket and got another ticket free from someone who didn't need hers.

Love & Friendship is an adaptation of Jane Austen's unfinished novel, Lady Susan. The film is very funny, with one of the stupidest characters I have ever seen, Sir James Martin. Look for him. The film even had a Movie Church and member of the clergy, but as in most Austen, the clergy are indistinguishable from actuaries. 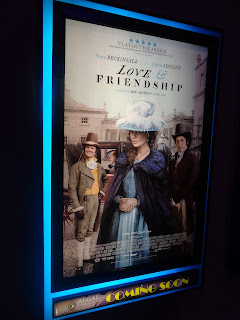 (There was a red carpet for the Festival, but the only people we recognized on it were ourselves.) 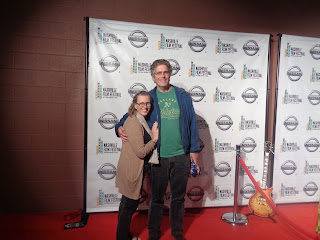 Posted by churchandstates at 7:55 PM