African American Film History Month -- The Heart is a Rebel 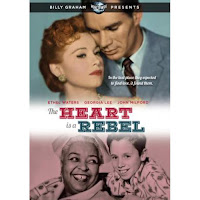 Waters would have been remembered if she had pursued only a musical career, with hits such as “Stormy Weather,” “Am I Blue?”, and “His Eye Is on the Sparrow.” She earned a place in the Gospel Hall of Fame and the Christian Music Hall of Fame. She even got her own stamp from the U.S. Postal Service in 1994.

She played herself in On the With the Show (1929), her first film. Her first role portraying a character other than herself was in a short, Rufus Jones for President (1933), playing the mother of young Rufus Jones (Sammy Davis Jr.). In 1939, she became the first African American to star in her own television series, The Ethel Waters Show. In 1950, she starred in a prime-time show, Beulah. 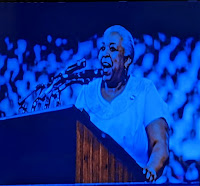 Her memorable career meant that by starring in The Heart Is a Rebel (produced by World Wide Pictures, Billy Graham’s production company), she drew attention to the film as a true star, with top billing. The picture was therefore big-time show business, which is especially interesting because one of the themes of the film is whether Billy Graham’s crusades are just a big show.

Waters plays Gladys, the nurse of a sick boy named Davy (Scotty Morrow). (As was common for African American actors at the time, most of her film roles were playing domestic workers.) Davy’s parents, Joan (Georgia Lee) and Hal Foster (John Milford), are pleased with Gladys’ care for their child but are concerned she is pushing her religion on him. Gladys has given Davy a book of Bible stories (which Davy deems “swell”) Hal refers to her “religious mumbo jumbo”.

When Davy’s doctor suggests prayer as part of the treatment for his heart malady, Joan keeps thinking about it. While walking near her workplace, she sees a church with a sign reading, “You are invited to enter this beautiful church to rest and to pray.” She goes inside, and when she goes home, she talks to Gladys about it. 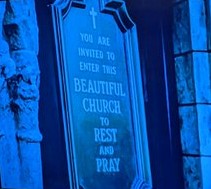 “The last time I was inside a church was before Davy was born. We went to an Easter service -- or was it Christmas? People come into the church with that tight expression on their faces but they go out with an expression of peace. As if they’ve found a source of strength outside of themselves,” she tells Gladys.  But Joan doesn’t feel like she can pray.

Gladys will be singing a solo at the Billy Graham Crusade that very night in Madison Square Garden. (Usually, the soloists at the Graham Crusades were famous artists like, well, Ethel Waters. But that night they were inviting a child’s nurse to do the solo.)

Joan decides to go. She tries to persuade her husband Hal to go with her, but Hal demurs because he's working on a big advertising campaign his boss is pressuring him to complete. (In my study of movies and television in the ’50s and ‘60s, at least one-third of all men worked in advertising. Another third worked in architecture, while the remainder mostly drove buses or taxis or were factory workers.) Hal advises Joan, “You catch Gladys’ big moment, just duck out before the fire and brimstone begins to fall.” 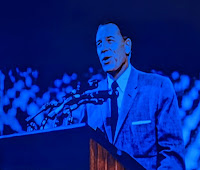 The Crusade at Madison Garden is packed and yet Joan, coming late, finds a seat toward the front of the stands (Good job, ushers!). She listens to the choir and a solo by George Beverly Shea, and then Gladys’ solo -- but she also sticks around for Billy Graham’s message.

The film gives a fair deal of uninterrupted screen time for Graham’s sermon. He preaches, “You can become a partaker of God’s new life… It doesn’t mean when you come to Christ you will have no new troubles… the Christian will come into conflict with the world…

"God says 'I’m willing to forgive your sin… But first you must repent'… There must be a willingness to turn from sin…By faith you must receive Christ into your heart.”

And Joan does receive Jesus as her Lord and Savior, walking forward to the strains of “Just As I Am.” When she returns home, she tries to tell Hal about her experience, but he doesn’t have time to talk. He can't stop working to listen to her because, he says, “I’m really on to something.” 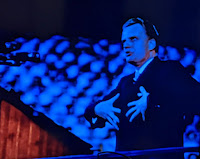 He really is on to something, because when he turns his new campaign over to his boss, and his boss shows the campaign to his client, the client is thrilled. So the boss invites the client over to Hal and Joan’s house for drinks that very night. (This kind of thing happened on the TV show, Bewitched, all the time, and I didn't understand it then, either.)

The client, Alfred Carlson (Kenneth McDonald), brings his wife (Madge Blake, Aunt Harriet from the Batman TV show) to the Fosters', along with various people from the agency, including Hal’s friend, Bill (Alvy Moore, Hank Kimball from the TV show Green Acres). Gladys helps prepare the hors d'oeuvres, commenting to Joan, “How can people call tidbits like this food? They’re just teasing their stomachs.”

The party conversation turns to the Crusade at Madison Square Garden, which has been going on for weeks. Mr. Carlson says, “The Crusade is a well-organized campaign. They have a foolproof product, and they know how to sell it. The man has a script and he knows how to sell it.” 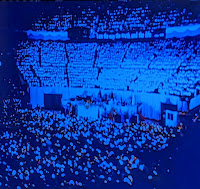 One of the other guests says, “Most of his followers are the unstable sort. In six months' time, everyone will wonder what the fuss was about.”

Joan is silent until someone asks her opinion. She tells the group she went to the Crusade the previous night. “Last night I discovered I was completely ignorant about what Christianity really is about. As Mr. Graham talked, I felt a need for a personal savior. I went forward. I found myself with others looking to accept Christ.”

Hal berates his wife for ruining his career by talking about religion in front of his boss and the client. But Hal’s career is not ruined. He continues to do quite well, receiving promotion after promotion. 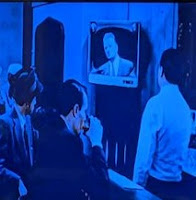 One day, Hal comes to Joan’s work to tell her that they are finally in a financial situation where they can properly care for Davy. They can afford the specialist his doctor had been advising. He says Joan can stop depending on religion as a crutch, but Joan tells Hal her faith is real and not a fantasy.

As they talk, Joan receives a phone call. Gladys is calling from the hospital because Davy had taken a turn for the worse. Hal and Joan go to the hospital. Davy’s doctor tells the parents that the boy must go in for heart surgery immediately. During the operation, Joan hears Hal pray that God would save their son.

The doctor comes out and tells the parents and Gladys that the surgery went better than expected. They can expect full recovery for Davy.

Joan suggests to Gladys and Hal they should thank God for saving Davy, but Hal says he has no time for that, he has to go back to work. Joan reprimands Hal for his hypocrisy, since not long before he was pleading to God for their son. 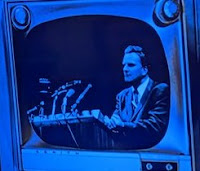 Hal doesn’t go to work. He goes to a bar where he is joined by his friend, Bill. And Hal drinks to the point that the bartender threatens to cut him off.
,
The television is playing behind the bar and Billy Graham comes on the screen. The bartender says, “There’s a showman.”
Graham says, “I’m going to ask you to surrender to that little voice because that voice is the Spirit of God.”
Hal is quite obviously moved, but the bartender says, “Sorry, Hal, I’m going to have to change the channel, that preacher makes customers uncomfortable.”

Hal goes to Davy’s room at the hospital to find the boy alert and in the company of Joan and Gladys. He apologizes to his wife for how he’s behaved. “I’m going to change that,” he says, “With God’s help. I need so much help. I don’t know how to take the first step.”

“You already have, darling,” Joan says. The film ends with a close-up of Gladys looking skyward.

The film is corny as can be, but it does capture a moment when a man like Billy Graham could go to a large city and really make an impact with one of his Crusades. Graham made his missteps in life (defending President Nixon chief among them), but his life was characterized by integrity and faithfulness to the message of the Gospel. So we’re giving Billy Graham and his sixteen-week Madison Square Garden Crusade our highest Movie Church rating of Four Steeples.
Posted by churchandstates at 7:39 PM