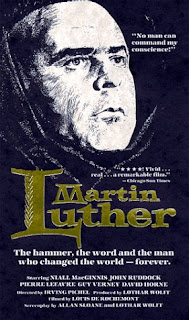 Martin Luther (1953)
Luther (1974)
Luther (2003)
I was duped by contemporary holiday priorities.
Last Sunday was Reformation Sunday and this post should really have led into that day, but instead, like most of America, I thought first about last Sunday being Halloween.
As penance, I watched not one, not two, but three films about Martin Luther. This really makes no sense at all because Luther was all about getting rid of penance and seeking forgiveness through faith in Christ alone. So my bad twice.

But let's move on, shall we?
Martin Luther (1483 - 1546) was one of the most influential men in history. His life and work led to the foundation of not just the Lutheran Church, but all Protestant churches. Because of Luther, religious and also political authority became open to question. His translation of the Bible into the German vernacular had the same kind of impact on the language that the King James Bible did on English, and furthered the cause of popular literacy. And he changed the kind of beer consumed in his homeland, as drinking hops was an act of rebellion against the Catholic Church (the whole beer thing never comes up in any of the films below.)

1953’s Martin Luther very much has the feel of an educational film, because, well, it is. Though the opening crawl reads that it is the work of “historians of many faiths”, the film was a co-production of the Lutheran Churches of Germany and America (sponsored by Luther Filmgesellshaft and the Lutheran Church of America.) and Luther comes off well throughout. 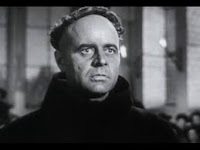 The film opens with Martin (Niall MacGinnis) leaving law school to go to the monastery, much to the displeasure of his father who had pinned hopes on his son’s success as a lawyer. Martin had hoped to find peace after taking the vows of poverty, chastity, and obedience, but as a monk, believes God doesn’t approve of him. His superiors send him to Wittenberg to serve as a priest saying, “We’ll keep him so busy, he won’t have time for his troubled soul. He’ll find his peace in Christ.”

Luther is sent to Rome and is encouraged to see one of Judas’ silver coins and the Pope, Julius the Second, for his spiritual benefit. But he is disappointed by what he sees. He sees the relics as not symbols of salvation, but “crutches to uphold a faltering faith.” Luther claims to have found true hope in “Romans 1:17” (though the numerical system for denoting New Testament verses was popularized by Robert Estienne in the 1550’s, after Luther’s death).  Luther says, “The just will live by faith. Is there anything about relics? Faith in what God has done for him through His Son.”

Luther speaks out against relics as a means of grace, much to the displeasure of Duke Frederick, the sponsor of Luther’s professorial chair at Wittenberg University. Luther also preaches against indulgences (the theology of giving financially to the church to shorten the years loved ones spend in purgatory). Johann Tetzel, a representative of the Vatican, was most displeased about this since his chief work was selling indulgences.

Tetzel threatens Luther, “I’ll burn his books, and I’ll burn him, too.” The Vatican begins to take Luther seriously as a threat. The German people admire Luther for standing up to Rome, and one of the locals says, "For the first time in a hundred years, someone has told the Pope where to get off!”
Martin’s supervisor, Augustinian Father Johann von Staupitz, sees nothing but pain for Luther, “Martin, Martin, I see nothing ahead of you but the Cross. May God have mercy on your soul and those who try to follow your preaching.”

The Vatican condemns Luther, but he is protected by the Emperor of Germany, leading to the country's break from the Roman Church. We see Luther working on his translation and his joy in seeing his servant read the Gospel for himself for the first time. And we see his marriage to Kate the nun. And the narrator assures us that all of this led to the still prospering Lutheran Church. “A Mighty Fortress” (lyrics by Martin Luther) plays during the end credits, in case we had doubt who produced this film. 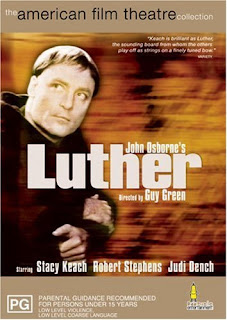 1974’s Luther was most certainly not a production of the Lutheran Church but rather a production of the American Film Theater. This production company was made with the goal of bringing important stage plays to the screen, including this adaptation of John Osborne’s 1961 play. Osborne was interested in the themes of rebellion against society; he was best known for his plays Look Back in Anger and The Entertainer.

Stacy Keach plays Luther as a man who can be understood by psychological rather than theological drives. He is dealing with daddy issues and toilet troubles. (Both of these things were certainly influences on Luther, but the play and the film make these Luther’s primary drives.)

The film opens later in Luther’s life, during the Peasants' Rebellion when Luther encouraged the authorities to crack down on the rebellion. A peasant accuses Luther of being a butcher with blood on his hands. “My father is dead, and you’re alive and well and cuddling in the arms of your nun.”

But then we go back earlier in Luther’s life when he stripped down to a thong to take his vows and was told, “Choose God or the world, if you choose the order, you are not free to reject it.” He chose the Augustinian order, but of course, would later reject it. 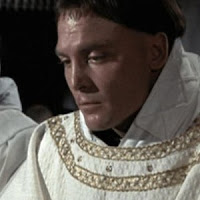 He is shown dealing with digestive issues as he struggles with the question of his salvation (“I wish my bowels would open”). And when he does rebel against Rome, he talks about it in scatological terms, “If I break wind in Wittenberg they might smell it in Rome.” But he does break with Rome, saying, “It is as hard for me to do what I must do as for a man to truthfully call his mother a whore.” And he says, “When the words emerged, ‘The just shall live by faith’ and my (intestinal) pain vanished.”

The film ends as it begins in the Peasants' Rebellion. He sees violence all around, but says “There’s no such thing as an orderly revolution… In the teeth of death we live, if He (God) butchers us, then we live.” 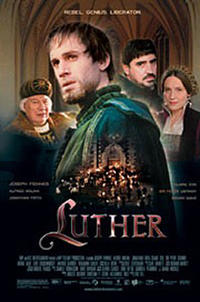 2003’s Luther is my favorite biography of the man, and certainly the most entertaining. It features a great cast: Joseph Fiennes in the title role, Peter Ustinov as Frederick the Wise, Claire Cox as Katrina, Alfred Molina as Tetzel, and especially Bruno Ganz as Luther’s Augustinian mentor. This film was also produced by the Lutheran Church (“Thrivent Financial for Lutherans” reads the production credit), so there is little doubt as to where its sympathies lie.

This film begins with Luther's conversion, his decision to give his life to God to become a monk. Caught alone on a road during a fierce thunderstorm, he fears for his life. “Help me!” he cries out. “Don’t let me die like a dog on the road! I give myself to God!” (One can’t help but be reminded of the conversion of Saul to Paul on the road to Damascus.)

Again we see Martin confront his disappointed father who hoped his son would become a lawyer. We see him struggle with fear of judgment, “I’m too full of sin to be a priest!”
His Augustinian father tells him, “After two years of confessions I’ve never heard you confess anything remotely interesting.” He encourages Martin to “Bind yourself to Christ and say, ‘I am yours, save me.’”

Again we see Martin travel to Rome, to his great disgust. He hears barkers hawking relics, such as, “This way for the John the Baptist’s head!” On these sites, he is encouraged to “Give generously!” He is distraught to learn there are brothels for clerics in Rome. “You can buy anything, sex or salvation,” he frets.

After this, he is sent to Wittenberg to be a priest and study the New Testament. This perplexes him. But he is told it is there, as a preacher, he will find his faith.

We see Luther come across a boy who has hung himself. Against the orders of the church, he buries the boy in the church graveyard, arguing that the child is no different from a man killed by the robber in the woods because the boy was killed by the lies of the devil. 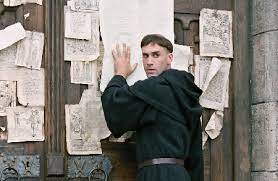 As in the other two films, we see Luther preach against relics and indulgences, but in this film, his preaching is genuinely funny. “God once spoke through the mouth of an ass, and He may be about to do it again… 18 of the 12 apostles buried are in Spain... Enough nails from the cross are available in Rome to shoe all the horses in Saxony.” His preaching is not just funny, but gracious and enlightening.

We also see Tetzel's preaching, which is the epitome of fire and brimstone. “Can’t you hear the screams of your parents? Grandparents? Aunts and uncles? For a few coins, you could rescue them.”

When Luther learns that a poor widow, mother of a young child, gave money to Tetzel, he is outraged, “This paper means nothing. You must trust in God’s love, use your money to feed Greta.”

But Tetzel claims, “I can save the soul of a man who violates the Holy Mother herself.”

Luther preaches against putting hope in relics and indulgences. He says, “Christ isn’t found in the bones of saints, but in your love for one another, in His sacraments, and in His Holy Word.”

So again we see Luther in trouble with Rome. He is called to appear there but is warned, “The Rome Inquisition doesn’t give rulings, it gives death sentences.” When the German authorities refuse to hand him over, the trial by Rome is set for the Diet of Worms.

When he refuses to deny his work, he gives one of the most famous of history’s speeches, “Unless I am convinced by Scripture and by plain reason and not by Popes and councils who have so often contradicted themselves, my conscience is captive to the Word of God. To go against conscience is neither right nor safe. I cannot and I will not recant. Here I stand. I can do no other. God help me.”

Luther’s relationship with Katrina von Bora is shown with humor and tenderness. Katrina is one of a dozen or so nuns who escaped a convent hidden in herring barrels, and she's the only one who can't find a husband. She has to settle for Martin (and he didn't especially want to marry her -- or anyone) The marriage eventually becomes a delight to both.

Luther, as presented in these films, is a man who would be a pleasure to know as a preacher and a companion in a pub. That’s why he earns our highest Movie Churches rating of Four Steeples.

Posted by churchandstates at 9:01 PM